Daniel Auteuil and Juliette Binoche play a successful couple who are mysteriously sent videotapes of their house with accompanying sinister drawings. Who has sent them? And why? A tense and exciting thriller. 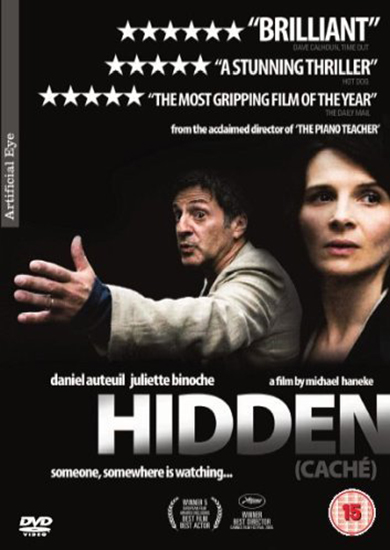 Director Michael Haneke's Paris set drama plays with levels of reality right from the start. It opens with a seemingly innocuous shot of a street that turns out to be footage from one of several mysterious and unnerving video tapes sent to a bourgeois couple Georges and Anne Laurent (Daniel Auteuil and Juliette Binoche). The scrawled drawings which accompany some of the tapes trigger memories of Georges' childhood, particularly of a shameful incident involving an Algerian boy. And so the film begins methodically to uncover the many meanings of the title: here are hidden cameras, hidden secrets and people of colour who might as well be hidden for all the notice that wealthy white people Georges and Anne take of them. The sense of dread that the director expertly builds up may lead some viewers to expect tidy, thriller-style closure at the end. But, marshalling together themes and notions of morality which have pervaded his work for years, Hankeke produces something far more unsettling, oblique and undoubtedly masterful.
Radio Times - 2006
This film is a smart marriage of the thriller genre with a compendium of strong ideas about guilt, racism, recent French history and cinema itself. It opens with a lingering static shot of a bourgeois Parisian home. We watch as a woman leaves through the front door. A car passes. Birdsong permeates the sound tract. So far, so very normal, but what are we looking at and why? We are, in fact, watching a video that's been sent anonymously to the owners of the house, Georges and Anne Laurent, a wealthy middle-class couple, who are ostensibly paragons of the Paris intelligentsia. We watch as the pair agonise over this sinister intrusion into their ordered lives. Who's been filming the house? And why? For the Laurents, it's the start of a horrific upset that mirrors the disturbing breakdown of familiar comfort. The tapes continue to arrive – some with childish drawings that hint at violence. All the while Haneke crafts the fabric and ? of Georges' and Anne's lives with cold precision, only to upset their habits violently at regular intervals – a knock at the door ? a civilised ? with ? or a whisper in the ear from Georges' producer at the end of his chat show. The effect is to plant unease and suspicion at every turn. Yet at the same time, Haneke presents this parable within the framework of a thriller. The logic of the genre – the desire to ask "who did it" is a trap. It makes us complicit in Georges' accusations and hints strongly at France's continuing uneasy relationship with its immigrant community. It's here that Haneke's film leaves the personal behind and becomes a reflection on an entire society.
Time Out - February 2006

What you thought about Hidden

Michael Honeke's Hidden, unfolded its complex meanings with great skill and power. A dominant theme in the responses was the 'compelling and sinister pace', 'the care in developing characterisation', 'the fascinating, clever and subtle insights into family relationships' and the 'riveting, sinister and disturbing connectivity with France's recent colonial past'. The film was 'beautifully filmed' with 'superb acting - all the characters were totally believable, every small part well-defined'. The skilful camera work allowed the tension to grow throughout the film, the sense of menace keeping members of the audience on the edge of their seats, 'with the silences as powerful as the words'. For one viewer, the film had a shocking consistency 'grey clothes, grey apartment, grey lives - the bastards had it coming, didn't they?', 'seeing in fact what lay beneath the respectable bourgeois intellectual lifestyle'. This disturbing element was picked up in another response. 'No-one lived in the real world - they moved in a world where all experience had to be at one remove from reality and no-one told the truth except as a matter of expediency'. In the same vein, one response noted how compelling and unsettling it was to watch the disintegration of a comfortable life and marriage which in fact hid guilt, shame and violence. Most responses suggested that the open, enigmatic ending, while leaving many questions unanswered, was finally, in the spirit of the film as a whole. A number however admitted that they had fallen into the "who did it" trap and were a bit let down by the director's refusal to be clear. They found that the open ending belied the powerful tension of the rest of the film. But for one member of the audience, this refusal gave an extra dimension. 'Nothing so easy as an ending - this way you take the menace home with you'.