An epic tale of love, family, jealousy and revenge set in the Canadian Arctic. Based on an Inuit legend, the film is at times brutal but with magic mixed in. The Arctic light and landscapes add a stark beauty. 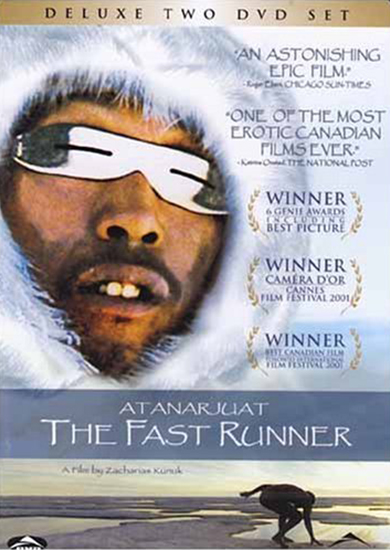 Atarnajuat - the Fast Runner, the remarkable Canadian Inuit film that won the Cannes d'Or at the 2001 Cannes Film Festival, takes place in the island community of Igloolik, a stretch of snowy tundra surrounded by ocean and ice, bathed in a clear amber light. This film is made from deep inside Inuit culture by Inuit storytellers and filmmakers. We are plunged into a chronicle, centuries old, of jealousy, murder and savage justice; of an evil tribal chief's son who tries to kill two Inuit brothers in order to steal a wife and how one brother, Atarnajuat, survives, runsfast and fights back. It's a compelling story that has enthralled Inuit tribes for generations, here potently distilled and embroidered by the screenwriter, the late Paul Apak Angilirq. This is a film of epic beauty and pulse-racing adventure. It's the Inuit equivalent of Great Britain's Robin Hood or the Icelandic sagas that inspired Tolkein's Lord of the Rings. This is a landmark movie that becomes a priceless entry into a distant land and its people.
Chicago Tribune - 2001
The first ever feature film to be made in the Inuktitut (Canadian Eskimo) language this epic tale recounts the ancient Inuit legend of Atarnajuat. Set some thousand years ago in the settlement of Igloolik near the Arctic Circle, Atarnajuat relates how shamanic forces spark deep divisions within a community of nomadic Inuit. Robustly acted by its Inuit cast, the film succeeds as a mythic drama of good versus evil. Yet it is also an impressively vivid and detailed depiction of a particular way of life; shelter is provided by carefully constructed igloos, clothes are fashioned from animal skins, transport consists of husky drawn sleds, whilst the staple food is walrus or seal meat. The remarkable cinematography and Arctic light capture the forbidding expanse of the tundra landscapes. The film soon settles into its own rhythm and the chase sequence, involving the naked Atarnajuat being pursued on foot across the ice floes, is genuinely extraordinary.
BBC Film Review - 2001

What you thought about Atanarjuat: The Fast Runner

There was a good response to this unusual but very long film. The quality of the acting, direction and cinematography was very widely praised, particularly the power of the lead characters, Atanarjuat, Oki and Atuat, and the bleak, beautiful vision of the arctic tundra. The 'elemental quality', and the insights into a very different culture and way of life also drew positive comment. It was a 'very humane story of an extraordinary people', 'a privileged access into a very different culture'. Several responses said that they had learned a great deal about Inuit culture and that, story apart, the film was fascinating on a documentary level, showing the bleakness and hardship of the way of life. Some of you found the pace a bit slow to start with and the time shift at the start of the film, and similarities in the appearance of some of the male actors , confusing. It was, wrote one viewer, 'epic in length, but not in substance'. So, at its worst it was, 'boring and incomprehensible'; at its best 'gripping from the first shot of the ice to the heartwarming conclusion'.