Blame it on Fidel 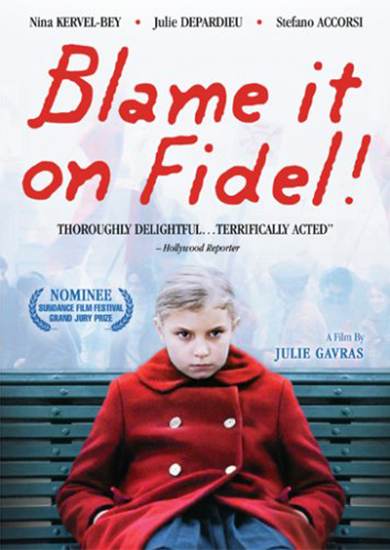 Life is sweet for nine-year-old Anna (Nina Kervell), living a very bourgeois life in turn of the 1970's France. She's immaculate, fiercely intelligent and a bit of a snob. So when her parents, Spanish lawyer Fernando and French journalist Marie, decide that selling up, scaling down and making friends with lots of bearded radical socialists, is the way forward, their little dyed-in-the-wool conservative, digs her heels in. Grappling with what exactly is going on as her life turns into a turmoil, Anna takes snippets of information from here and there including the idea from her father that Mickey Mouse is a fascist. In one stunning scene we see a political demonstration from her point of view, down by the elbows of the crowd. As precocious as she is, Anna is just trying to piece together the reasons for this new and definitely not improved life that's been inflicted on her. What makes this film a real gem is Kervel's brilliant performance, personifying this stage of growing up with a perfect balance of brattishness, bright intellect, humour and innocence.
BBC Movies Review - October 2007
First time director, Julie Gavras, has made a delightfully supple comedy in this early 70's story not only from the tantrum-throwing heroine's uneasy adjustment to newly radicalised priorities, but from her instinctive probing of mum and dad's sometimes woolly self-justification. The film belongs to Nina Kervel's Anna, little Miss Unimpressed, a pouting terror in school uniform. Julie Gavras has managed the rare trick of making an essentially serious movie with the lightest of touch. A deft, original, entertaining and thoughtful look at that moment when we realise the world's just that bit more complicated than we thought.
Time Out - October 2007

What you thought about Blame it on Fidel

Despite the somewhat depleted number of the audience because of the weather there was no doubting the pleasure that this 'well-observed and thought-provoking film' gave. Several comments picked out 'subtlety' and 'sensitivity', as central factors, as well as the wit and tenderness in the portrayal of relationships within the family with the understanding of the 'difficulties of communication between the child's and the adult world'. Nina Kervell's performance as the precocious, intelligent and innocent Anna, was, for almost all the audience, both remarkable and moving - 'excellent', 'brilliant', 'totally believable', 'wonderful', 'superb'. Stemming from this striking central performance was appreciation of some of the wider issues in the film - 'how the children adapted to change in different ways', 'the way the story presents political activism through a child's eyes', 'how to tell a political story in different and original ways', and 'how to make the best of uncertainties - a coming of age'. It is clear that it was worthwhile negotiating the snowy streets for this 'wise, witty and moving film'.