Ken, a hitman with a history, and new-to-the-profession Ray are sent to Bruges after Ray's bullets claim an innocent victim. Black comedy with unique humour and a real sense of surprise. 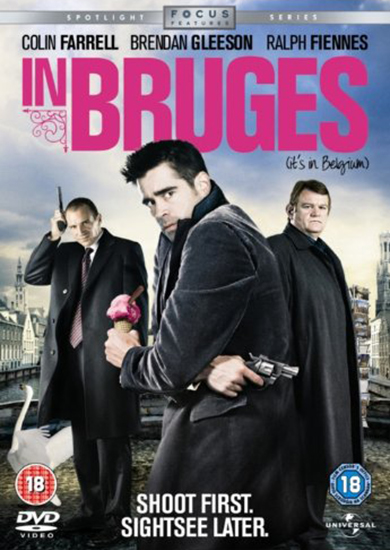 Martin McDonagh is famous for ultra-violent plays that are as fashionable as they are bloody. His theatrical work is often called 'subversive' and for his first film feature the director plays around with some populist presumptions, such as Bruges being boring and professional killing being a glamorous lifestyle choice. The dialogue is laugh-out-loud funny and it will be pigeon-holed enthusiastically as a black comedy although this definition doesn't quite fit. The humour is unique, overlaying an odd-couple set up with a real sense of surprise. It is refreshing in its tastelessness, but its supported by compassionate humanity. Ray (Farrell) and Ken (Gleeson) are not monsters, but complex human beings, whose secrets, motivations and regrets are revealed piecemeal.
Film Four - April 2008
Ex-theatre wunderkind Martin McDonagh has made a clever, savvy and enjoyable revamp of the odd couple gangster caper, a genre picture, confident in its own verbal sparrings, joke-enabling moral sophistry and tongue-in-cheek classical and cinematic borrowings. Its mock-artistic thriller trappings notwithstanding, In Bruges is basically a funny tragicomic two-hander, with the casting of Farrell alongside Gleeson, enabling a pleasing Irish inflection. McDonagh adeptly milks the situation comedy of the mismatched pair with the clock running down - lacing his drama with cheeky racist dwarf joke and dextrous set pieces. But the film's real pleasure is in McDonagh's verbal felicity - the naturalistic dialogue is a breath of fresh air - while Farrell struggles to juggle his humorous 'thick' persona with romantic pathos. Gleeson excels in his role of the weary gangster, pondering the possibilities of his own redemption.
Time Out - April 2008

What you thought about In Bruges

This 'bleakest of black comedies' was for many of you 'far too good to miss'. 'This stunning off-beat film', 'a real roller coaster', with the 'brutal violence' set against 'the tranquillity and beauty of Bruges' was for many of you a film of challenging contrasts. 'Genuinely funny with its own bizarre coherence', 'I was thrown between giggling at bizarre dialogue and bloody, very violent murders', 'funny, surprising and unsettling'. The complexity of characters and situation also appealed. 'A very clever exploration of twisted morality aided and not debased by the humour', 'mad, gripping, hard-hitting, wonderful', 'a clearly recognisable Anglo-Irish ethos, laced with thuggish refinements'. This was summed up by one response which saw the film as 'an amazing interplay of opposites, mirrored by my being repulsed and also entertained. Very cleverly constructed'. The performance of Colin Farrell, Brendan Gleeson and Ralph Fiennes received tributes from many of you: 'beautifully acted', 'the leads were brilliant', 'brilliantly acted', 'superb characterisation' 'excellent acting with great humour', 'the acting was superb - to make us empathise with cold-blooded killers takes some doing'. There was also praise for the 'sharp crackling dialogue' and the way it revealed the 'inner conflicts of conscience'. The reservations you had, not surprisingly, were abut the levels of violence in the film; 'too much gratuitous violence', 'too violent for my taste', 'so much brutality', 'the film slipped into a welter of gore', 'unpleasant, unbelievable, sadistic'. There was a view, also that the ending was 'too protracted', 'predictable', 'the climactic chase was the weakest bit of the film'. However, one response sums up concisely the pervading tone of all the responses, 'brilliant, stylishly violent, anarchically comic, with wonderful music, cinematography and acting'.