'Mockumentary from Oz. about a philosophical chap who's in the toilets rental business. A comedy and a very sweet one. 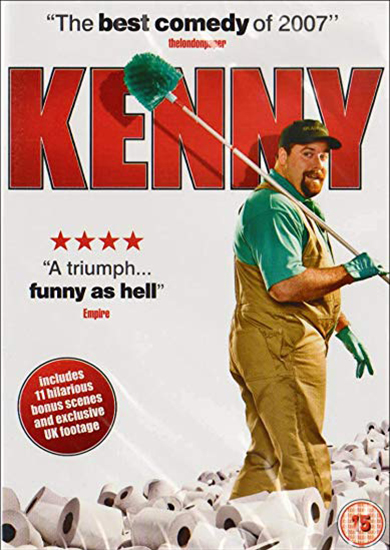 Kenny is an unexpectedly charming and bitingly funny mock documentary concerning the ins and outs of a rotund, lisping, portable-toilet attendant. A smash hit in its native Australia, the film follows Kenny and his 'Splashdown' crew to his numerous music festivals and sporting events. In recognition of his good work for the company, he is sent off to the Pumper and Cleaner Expo in Nashville, Tennessee, where he strikes up a bond with a lonely air-hostess. Full of deft character turns and some delightfully outré (though never crude) comic touches in the script, the finely-textured humour and a torrent of quality one-liners will keep you smiling from ear to ear.

Yes , this is a movie about Portaloos. A comedy and a very sweet one too, against the odds. This is down, in large part, to Shane Jacobson, who makes Aussie plumber Kenny Smyth such a likeable, decent down-to earth guy. The film is a unique endeavour, a 'mockumentary' that treads a fine line between fiction and reality, that is hilarious, but doesn't ridicule its subjects or subject matter that makes a hero of an ordinary working man, who's working with something most of us shy away from. Shane Jacobson is spot-on with his performance as Kenny; Clayton Jacobson, the director, is so discreet and subtle with the film's construction. Together they handle the material with such aplomb that Kenny is a modest, low-budget cracker!

What you thought about Kenny

There was clearly plenty to enjoy for the majority of the audience from the 'great one-liners', to the 'poignant and moving characterisation' in the film. There was considerable appreciation of the nature, determination, kindness, innocence and generosity of Kenny himself, 'what a lovely man', and the way the film communicated warmth 'a warm glow which will last for days'. Several comments focussed on the pleasure of the documentary format and the convincing reality of events and personalities it created, together with a sense of humour and pathos. It was, not surprisingly, frequently described as 'earthy', or down-to-earth, but other responses detected subtle philosophical overtones and meanings together with a convincing and satirical portrait of the spectrum of Australian life. The acting was praised for its restraint and insight, adding effectively to the overall quality of the film. Some responses found the film too long , rather episodic and slow. Almost universally criticised in all responses, however, was the poor sound quality, both in volume and clarity, which actively inhibited full enjoyment for many of the audience