Witty and heartfelt animations set during the Islamic revolution in Iran. A country tears itself apart seen through the eyes of precocious and outspoken young girl. 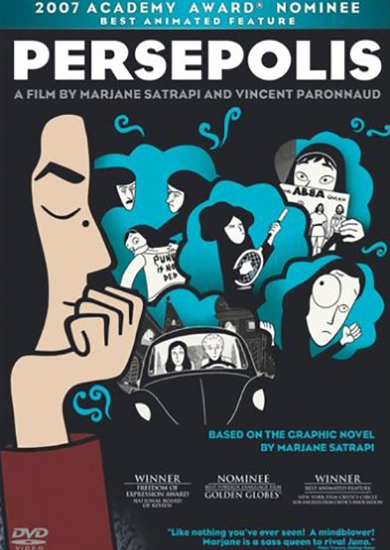 In an era when the understanding - or lack of it - between the West and the Middle East is dominated by warfare and new stories of violence, Marjane Satrapi's 'Persepolis' graphic novel is a breath of fresh air. The film draws very closely from her autobiographical book and enhances the visual style. Although Satrapi's story inevitably includes elements of tragedy, as family members succumb to the brutality of changing political regimes in Iran, her character, Marjane, is easy to relate to. When the teenage Marjane is in Austria, she pretends to be French, sick of people assuming all Iranians are 'violent bloodthirsty fanatics'. Her story emphasises the message that they are not. The story humanises Iranians and demonstrates how Marjane's experiences are similar to those of any other teenage girl. After the success of the book, Satrapi told the New York Times 'This is a universal story. I want to show that all dictatorships, no matter if its Chile, the cultural revolution in China or communist Poland, it is the same schematic. Here in the West, we judge them because we are so used to democracy, believing that if we have something, it is because we deserve it, because we chose it. Political changes turn your life completely upside down, not because you are crazy, but because you don't have any way out.
Channel 4 Film - 2008
The original French version of Marjane Satrapi's sensitive and sharp autobiographical graphic novel won the Prix du Jury at last year's Cannes Festival. Now there's an English language version. It's not the voices (Sean Penn as Marjane's father, Chiara Mastroianni as Marjane, Gena Rowlands as the worldly-wise grandmother, Iggy Pop as the radical uncle) that make Satrapi's film so distinctive; that honour goes to her soft black and white drawings of characters and foregrounds and her charcoal backgrounds of Tehran, Vienna or Paris. Also distinctive is her precocious, child-turned, reflective adult's eye view of the people around her and the changing fortunes of Iran, from the Shah, through revolution to Islamic state. 'Persepolis' is realism seen through special eyes. The animation allows her to stress the warmth of her family, while suddenly lunging into a mood of claustrophobia caused by Iran's moral police or leering men on the street. This is a delightful curious film that is concerned with the personal and political and provides a history of modern Iran, through one woman's experience.
Time Out - April 2008

What you thought about Persepolis

Overall there was a very good reaction to this film - particularly to the quality of the animation, the sadness of the story and the humour. 'I have wanted to see this film for some time.' 'Animation was fantastic - the story line less than cheery - but I understand why it was award winning.' 'A "one off" film genre.' 'Beautifully made - very effective sound effects and visuals.' 'Original.' 'Extraordinary animation.' 'Well made - its simplicity matched the story telling.' 'Thoughtful, melancholic, beautifully drawn.' 'The animation was very effective (amazing) but seemed to make the film longer than it really was!' 'Entirely engaging; very well made; unusual treatment of a serious subject. Really enjoyed it.' 'Clever animation. Clever narrative but too long!' 'Gripping, moving and funny.' 'Unique animation - kept my interest throughout.' 'The quality of the animation compensated for weaknesses in the overall thrust of the film; some delightful humour.' 'Good mix of sensitive stuff with touches of humour and humanity.' 'Slow to pull you into the story but got you there.' 'A good way to tell a difficult story.' 'Grandma' attracted particular comment: 'The grandma was attractive and well portrayed - she embodied hope and optimism.' However, the historical reality that underpinned the film was unavoidable. 'So enlightening and so chilling - a thoughtful depiction of Marjanne's alienation both within and outside Iran.' 'A very skilful autobiography.' 'Well painted historical account; the responsibilities of the West were clearly expressed.' 'Distressing - yet this is what life is like for so many people around the world.' 'A reminder of Iran's tragic recent past.' 'Fascinating insight into life in Iran.' 'Thought provoking, distressing, special.' 'Interesting collage of Iranian survival.' 'Sad and tragic.' 'Very sad; the film really educates and informs; what a medium to use to do this.' 'The tension was well done when the moral police were involved.' And yet there were some strongly stated reservations concerning the central character of the film, the Americanisation of the script and the length of the film! 'Too long.' 'Over long.' 'Slow to start.' 'Inconclusive and laboured in parts.' 'Excellent animation but an unsympathetic central character.' 'Central character interesting but self indulgent.' 'The film cast some light on life for the middle classes in post revolution Iran, but an irritating and unsympathetic main character and an appalling American dialogue spoilt this film.' 'Simplistic parable.' 'Did I learn anything new? Too childish in visual and linguistic form - the Americanisms sounded corny and the moralising became tiresome.' 'I did not like the American dialogue - would have preferred the original French with sub-titles.' 'Like watching a teaching resource for 12 year olds!' 'Not just visually but intellectually awful!' A final comment: 'An outstanding evening - 'Gone Fishing' was a treat and 'Persepolis' a very sad, witty film.'

Writer and Director: Chris Jones 'Lovely - but I was one of those who didn't know who had died!' 'Loved it - and the chance to listen to the director.' 'I liked having the short to start the evening.' 'Chris Jones deserves an Oscar for a wonderfully effective and touching story.' There was a very positive audience response to the short - both the film and the talk. We will try to put on some more!