A Dublin busker falls for the naïve charms of a Czech immigrant in this lyrical love story. An innovative piece of musical cinema. Captivating and lovely to watch. 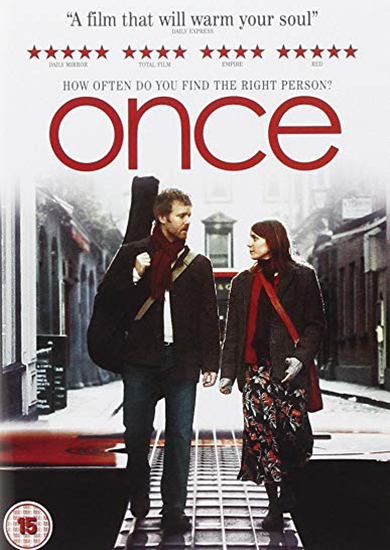 Winner of the Audience Award at this year's Sundance Festival, John Carney's poignant, modern day love story set on the streets of Dublin offers a brooding alternative to the traditional conventions of the musical. Starring musicians Glen Hansard and Marketa Irglova as the unmarried leads, the film centres on their unlikely relationship when the 'Girl' an immigrant pianist, helps the 'Guy', a street busker, to make a demo to take to London. Attracted by their mutual adoration for music, a hesitant but empathetic relationship develops swiftly as they come to terms with past loves, through the delicately veiled metaphors of lyrics that are subtly woven into the narrative. Shot on DV, Carney's highly charged, urban mise-en-scene with its blinking streetlamps, vacant shops and dishevelled bed-sits provides ample poetic backdrop for the lengthy tracking shots. With outstanding performances from Hansard and newcomer Irglova, Carney has created a sublime visual album of unassuming and self-assured elegance.
Time Out - 2007
Writer and director John Carney says he wanted to make a 'visual album' with 'Once' and the result is an innovative piece of musical cinema. Casting musicians rather than actors in the main roles, and telling the story for the most part with songs, rather than dialogue, he ties film and music together to make something that looks and sounds nothing like a conventional musical. A Dublin busker with a sad song in his heart and holes in his guitar meets a nameless immigrant girl and befriends her. They begin to play music together and a tentative but tender relationship blossoms. Hansard and Irglova carry the film off with captivating charm. There is a happy naivety to their acting that makes it clear they are not professionals and the pair make a virtue of their obvious inexperience. The film is so naturally and effortlessly performed by both actors that it appears strangely unaffected and lovely to watch.
Channel 4 Film - 2007

What you thought about Once

The majority of you felt that the film presented an optimistic story supported by good acting, excellent photography and impressive music. Beautifully acted, great photography and the music! Grand - very sweet; Touching and uplifting with a soundtrack I shall be hunting for; Real characters and some beautiful music; A relationship brought about by music and creativity - a whole in itself; Delightfully off-beat film; Beautifully presented - a different way to communicate a story; Bloody brilliant; Lovely, slow moving, enjoyable film; Really poetic in parts - I could have watched the girl all night; Sweet film although a touch self indulgent; Wonderful - resilience of the human spirit - deeply moving; Doesn't fall into the trap of tying all the ends neatly together. Off beat, charming - full of unexpected warmth; Absolutely loved the story and the music; Loved the lyrics and lightness of touch; Hopeful, refreshing, magical film - mutual support through self belief and belief in others; Unusual and creative; Very grounded, romantic and sweet but real; Street theatre; Excellent camera work; Wonderful story telling through the music; Low budget film with a very good touch; Excellent use of the camera angle and tracking shots. For others it was too long, became repetitive and was just too good to be true! Would have benefited from a touch more editing; Plot had holes - but hey! - musical plots usually do; Good music - a little too long; Music OK the first time but repetitive; What started as wonderful music grated towards the end; Music somewhat repetitive; The music perhaps too much; Laboured in places; Long drawn out. Of course it is an Irish film shot in an Irish location with accents that are difficult for those living on the other side of the Irish Sea. Oh - the charm of the Irish!! Beautifully portrayed, haunting music; Nice to see Dublin; Hard film to watch if you don't like the music! Sweet antidote to the X-factor culture; Lovely to see the joy of (musicians) playing together; A bit self indulgent but very natural - the 'girl' was lovely; Subtle humour; Hard to understand the language; Haunting songs - pity I couldn't hear the lyrics clearly as they told the story; Sound track (speech) was often difficult to follow. For a few the film was not a pleasant experience at all! Too much music for me; Boring story although some good scenes; Obvious love story but I could not get into it; Very disappointing - I could not follow the dialogue; Boring load of rubbish with awful whiney songs!