Danish émigré Jacob Petersen runs an orphanage helping street children in India which is threatened with closure. A businessman offers a lifeline gift of 4 million dollars but only if Jacob attends his daughter's wedding in Denmark. This innocent request throws Jacob into a collision between past and future. 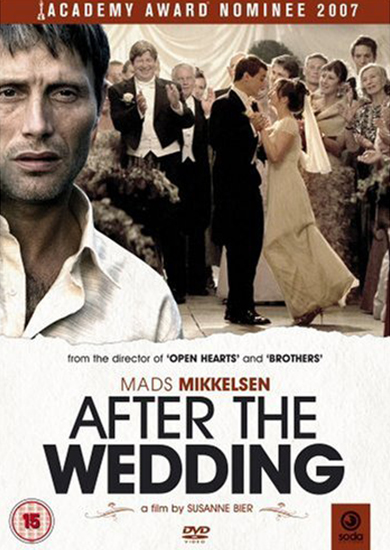 As Susanne Bier's latest movie came to an end last night, nearly every member of the audience cast their eye's downward, stunned, I believe by one of the most heartbreaking emotional films ever witnessed on screen. The basic setup is that Jacob ( Mads Mickklelsen), a Danish man, runs an orphanage in India. The orphanage is going under but a wealthy Danish businessman is promising to donate money, if Jacob will come back to Denmark to meet him. The opening scenes are tough to watch; the poverty of India is contrasted with the clean, luxurious life in Denmark. Jacob has lived for years in a simple environment and the opulence of his hotel room seems ludicrous. The beginning of the movie is interesting enough, but then Bier's film takes a steep nosedive plunge and veers off into a new territory. In fact, the wedding takes up about 55 seconds of screentime. What happens 'after the wedding', is when all semblance of normality departs the building and the emotional pain begins. The raw emotional delivery of the scenes is shown perfectly by the uncompromising cast - working with such intensity you might forget to breathe. After the Wedding is a superb film, a magnificent delivery of raw emotion, with the reality of the film heightened by intense powerful direction.
20/20 Filmsight - August 2007
'Champagne is poured, secrets are spilled', warns the poster for After the Wedding, the latest collaboration from director Susanne Bier and screenwriter Anders Thomas. With a hook like that you might be forgiven for thinking that this is another story of family secrets and lies. It is something more, an enjoyable intelligent drama. Jacob is a charity worker in India who receives a mysterious offer from a Copenhagen businessman to make a substantial donation to the beleaguered orphanage where he works. Arriving back in his homeland, Jacob suspects his wealthy benefactor is playing power games. Then he discovers that the businessman's wife is his ex-girlfriend, and that Anna may well be the daughter he never knew he had. Struggling to cope with the past as it erupts into the present, Jacob finds himself torn between his life in India and his new found family in Denmark.
Channel 4 Film - August 2007

What you thought about After the Wedding

There was clearly substantial pleasure in and approval of our first film of the season. Many of you were completely involved in the 'compelling emotional quality', 'the powerful simple cinematography' and the 'convincing sensitivity of characterisation'. The 'sensitive and intelligent direction' was a key for many of you to the absorbing quality of the gradual unfolding of the action and motive and the choices to be made. Part of the fascination for some of the audience was the careful construction of a possible direction of events, then taken in a different and unexpected way. The 'complexity of the moral choices and the unpredictable paths taken', were a tribute to the film's thoughtful awareness of how individuals behave. The sense of 'generosity of spirit' in the film further added to its appeal and understanding. Several responses found 'great integrity' in the acting and direction, as well as sensitivity, which contributed further to the 'engrossing emotional quality' of the film. There were also a number of appreciative comments about the quality of the accompanying music. There were some reservations. One or two responses found the action melodramatic and too long, with a ponderous ending. There was a sense too, that the dramatic turns were a bit contrived and sometimes disjointed. One response wants 'less Denmark and more India'. Another, while enjoying the film overall, found the direction 'self-indulgent'. Nevertheless, there was overwhelming pleasure in the emotional power, subtle and intelligent acting and human insight of the film, and a clear view that it made an excellent start to the season.