A daring and inspiring film about the end of Pinochet's dictatorship in Chile. Against all odds and with scant resources, the opposition leaders devise an audacious plan to set Chile free. 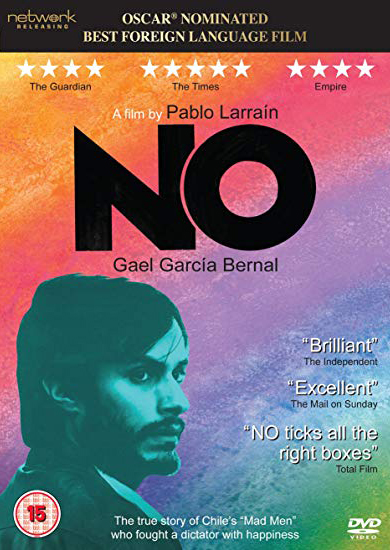 A simple vote ‘Yes’ or ‘No’. It’s 1988 and Chilean President, Augusto Pinochet, agrees to a referendum. If the nation votes ‘Yes’, he remains in power. Ad-man Rene (Gael Garcia Bernal) leads the team campaigning for ‘No’, using the marketing strategies of the American Cola Wars. To complicate matters. His boss (Alfredo Castro) heads the ‘Yes’ team. The rules are that each night, each side receives 15 minutes of airtime on national television to present its case. The ‘No’ movement assumes that the election is fixed in the dictator’s favour. They focus on raising awareness of the government’s atrocities. The problem is that this negative approach generates fear, which leads to voter abstention which further helps Pinochet. So Rene pushes for happiness – and presents a plan to speak of sunlight and hope. He has to convince lifelong, hardened protesters to give up their black and white political rhetoric and embrace a campaign with dancing rainbows, horses and picnics. The film becomes a kind of boxing match, getting more intense with each round and building to an exciting finish. Chronicling this fictional fight for the sons of Chile, the film reveals itself as an underdog story, pitting youthful optimism against aging tyranny, hope against repression.
Roger Ebert – New Movie Review - 2013
Marshall McLuhan called advertising the greatest art form of the 20th century. In ‘No’, Pablo Larrain’s smart, sly, fictionalised tale about the art of selling in a fraught period in Chilean history, advertising is a way of life. The story takes place in 1988 when political repression was the cruel law in Chile. That year, a national referendum was held to determine whether Pinochet would remain in power. The movie tracks Rene as he wrangles with the idealists running the ‘No’ campaign. For them, the campaign promises an end to tyranny and a democratic future. For Rene the ‘No’ vote is a consumer product – with rainbows, white-faced mimes, dancing girls, smiling children, a basket of baguettes and a catchy jingle. Rene is at times comically self-regarding and the movie is playful about his limitations. He is one of those compromised characters who is recognisably real, uncomfortably imperfect, not a politically correct prop. Rene is a master marketer. He pulls out a rainbow and the movie takes off like a shot.
Manohla Dargis – The New York Times - 2013

What you thought about No

The audience reacted warmly to Pablo Larrain’s film about the overthrow of a repressive dictatorship by that most modern of techniques – clever advertising. You found this “tour de force” on the theme of “we shall overcome”, “compelling and fascinating”. You thought that the film “generated great tension” as the advertising campaign escalated, a tension maintained for many in the audience by “clever documentary-style direction” despite the actual outcome of the referendum being already known. It was “this simplicity of filming and the thread of fear running through it”, which created “very well put-together emotional tension”. Several in the audience found the film a “salutary reminder of the horrors of the Pinochet regime” and were “heartened and to an extent, amazed” at the way the dictator was got rid of. Many of you appreciated the conflict on the ‘No’ side between the traditionalists and their outrage against repression and the slicker but much more effective marketing techniques to associate ‘No’ with general happiness. This led some to “ponder on the ambivalence” both of the techniques themselves and on the central character, and how far “he was actually committed to political change”. Several responses praised the performance of the lead actor because he was so able “to communicate a kind of professional detachment” from day-to-day events. One response wondered about “the contrast between the apparently detached, solitary pragmatic central character and his estranged, politically active wife”, admired it for its complexity but was disappointed by its lack of resolution. The “perceptiveness and sensitivity” of the filming, gave pleasure to many and there was a general sense of “palpable relief” when the ‘No’ campaign won, despite apparent attempts to gerrymander the results. Within this overall positive response to the film there were dissenting voices. For some it was “too long, a bit padded out” and despite being a “momentous time for Chile”, “failed to engage as a film”. There was a view that it was “too fragmented and did not flow easily” and that it was “one dimensional and lacked human empathy”, partly because “the documentary style of the film meant that the characters were superficial and lacked context”. For some “the conception was good but the execution lacked power – too wordy”. One or two responses made the point that the film worked well as a political record but lacked a human dimension and would have welcomed a greater exploration of Rene’s motivation and his relationship with his wife and son, to “put the politics in a more human context”.