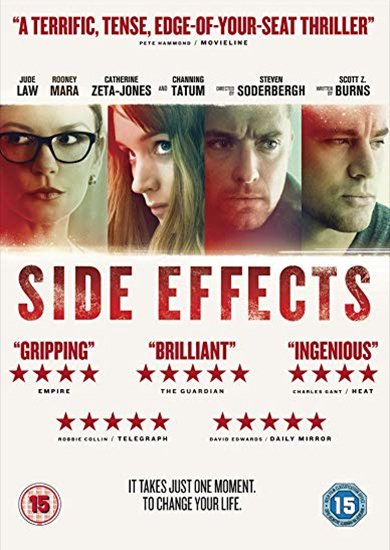 ‘Side Effects’ is brilliant: a ‘noir’ psychological thriller, that is also an acid satire on big Pharma, the mental health profession and its powerful, priestly caste of doctors. There is a compelling lead performance from Rooney Mara. She demonstrates a potent Hitchcockian combination: an ability to be scared and scary at the same time and Soderbergh’s film manages to introduce its effects in an insidious, almost intravenous, way. The smart script is elevated to something else in Soderbergh’s hands. He contrives some eerily powerful images, elegantly framed. The simplest scenes – a doctor’s office, a subway station, a bar – look like scenes from a nightmare. Jude Law gives a superb performance playing Dr. Jonathan Banks, an ambitious and fashionable Manhattan psychiatrist. He is more than ready to consider the blandishments of the pharmaceutical industry, who are prepared to pay him big bucks to prescribe some of the hi-tech anti-depression drugs they are developing. The destiny of Dr. Banks intersects with that of a troubled and beautiful young woman, Emily, played by Rooney Mara. After a strangely needless car accident, Emily comes under the care of Dr. Banks who suspects that she is trying to hurt herself. After some false starts with conventional medication, he puts her on the very latest in prescription drugs. ‘Side Effects’ has the compelling quality of a bad dream, anchored in what is recognisable reality with Jude Law as the perfect embodiment of big pharma. He is self-possessed, credibly human and flawed but also greedy and vain. What a gripping and disturbing thriller this is.
Peter Bradshaw – The Guardian - 2013
‘Side Effects’ is a highly watchable Hitchcockian thriller – with conscious misdirections, as you think the story is going one way when actually it is going another. It lures you into making assumptions, then requires you to reverse them all. As a viewer, you have to extricate yourself from your mistakes. As the film opens, we’re taken back three months and see a pretty young woman (Rooney Mara) visiting her husband in prison, jailed for insider trading. After his release, he promises to make it all up to her but in the next scene, she drives her car fast into a wall marked ‘exit’. Then we are in hospital and a cultivated, confident psychiatrist Dr. Jonathan Banks (Jude Law) is talking to her sympathetically and prescribing drugs for depression. In this world, everyone is popping pills, trying to find the one without too many side effects… It’s extremely controlled and adroit throughout, with compelling performances from Rooney Mara and Jude Law.
David Sexton – London Evening Standard - 2013

What you thought about Side Effects

Plenty of positive responses to the gripping “deals and double deals” of the first film of the season, Steven Soderbergh’s, ‘Side Effects’. Many responses showed an audience “caught in the atmosphere”, “held in the unfolding of events from the opening shot” and “enmeshed in illusion and deceit in a subtle psychological thriller”. Some of you found “hints of doubt and duplicity” in the characters from quite early on, others were “baffled and mesmerised into accepting what appeared to be the truth”, until quite late in the film’s narrative. Several comments paid tribute to the clever direction and manipulation of the audience’s responses and the “subtleties of the camera work” to position the audience. One or two in the audience felt a dramatic uncertainty “about whose side to be on” and enjoyed the film greatly as a consequence. There was a stream of praise for the central performances, particularly Rooney Mara and Jude Law, and for the “claustrophobic atmosphere of wealthy New York” as captured by the film. Several comments showed that the satirical jibes at the American pharmaceutical industry and the readiness of doctors to prescribe whatever was advertised on TV, added both to the success of the film and the tension and plausibility of unfolding events. Some in the audience enjoyed the pace of the film “plenty of tension, but not too hectic” Nevertheless, while many members enjoyed the “tangled web of events and personalities” there were some critical and dissenting voices. For some, it was “too complicated”, “lacked a clear narrative exposition” and gave too few clues about what was really going on. One member of the audience felt that “the opening third of the film was too slow and ponderous” and one or two others felt the denouement was “crass” and “unbelievable” and hence “a disappointment”. Clearly, however, the film was a considerable success with a good majority in the audience and many of you felt it was a very good start to the season, particularly with the enhanced visual and audio qualities of the “new technology”.