A horrific car accident connects three stories, each involving characters dealing with loss, regret and life's harsh realities all in the name of love. 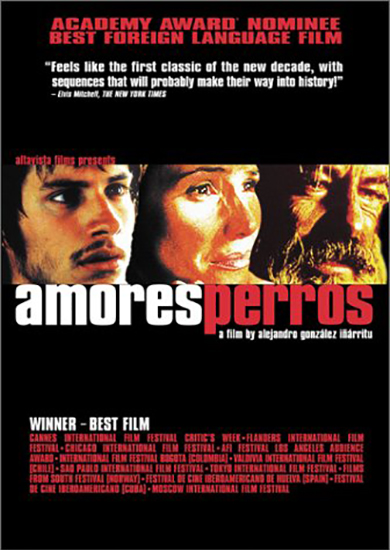 In this striking new Mexican movie, one character offers up the aphorism “to make God laugh, tell him your plans”. The film, whose title translates roughly as ‘Love is a Bitch’, brings out the elemental quality of life with a comprehensiveness and reach, so that Mexico City itself becomes a seething central character, the source of passion and a million miseries. It is structured as a time-shifting triptych of overlapping dramas and the effect is of a dizzying reality. The movie opens with a furious car chase and crash, which serves as the focal point for the three narratives that follow. The association of people with their dogs takes on a mystical specialness in ‘Amores Perros’. The curs, toys and strays are like emissaries of human folly. They suffer their lives in sympathy with their masters, whose own lives are full of uncontrollable suffering. The gallery of faces in this film is extraordinary, the shape of the drama itself, in all its tragic aspects. Without being explicit about it, Inarritu has fashioned an intensely moral fable, where lessons and epiphanies resound. Though bleak, the film is never nihilistic – it has an abiding faith in penance and retribution.
Peter Rainer – New York Magazine - 2000
The most populous sprawl on earth proves a vivid barometer for the state of 21st century civilisation in this feverish Mexico City triptych. This Rottweiler of a movie slams street level toughs up against high society celebrity and then picks up the carnage. In the first story, lovelorn Octavio (Garcia) turns to dogfighting to scrape enough money to steal his brother’s wife. In the second, a magazine editor leaves his family for beautiful model Valeria, just as an accident lands her in a wheelchair. The final story centres on an ex-Communist revolutionary (Echevarria) who prefers the companionship of mutts to people. Recalling ‘Resevoir Dogs’ and ‘Pulp Fiction’ but edgier than both, this is a tremendous first film. For all its bone-crunching savagery, it’s a fundamentally moral work.
Time Out - 2000

What you thought about Amores Perros

A mixed and thoughtful response from a smaller Saturday night audience, to the “compelling but harrowing” ‘Amores Perros’. The first reaction of many of you was to recoil from the brutal violence of the dog-fights in the early sequences, but there was recognition of and respect for the way this was a “central metaphor for the violence and cruelty of life in Mexico City”. “Bone-crunching savagery” apart, many of you admired the “skill and intricacy of the story“ and the “powerful technique of filming”, “the quality of engagement in action and event”, “the strikingly interwoven plots” and the sense of “a powerful and visceral tragedy”. There was recognition too, of some “instinctively naturalistic performances” by the main characters and the way they conveyed a realistic sense of “punishment and retribution” at the end of the film. These “gritty and exciting performances” were at the heart of the impact of the film for several of you. “An uncompromising and brave film” one responder remarked and especially so for a first film by the director. “I found myself cringing from time-to-time but I was never bored” wrote one viewer, “largely because of the interconnections between the three stories”. Amongst several responses was an awareness of the “central moral purpose” of the film which had considerable impact. There were, of course, some reservations about this “raw and uncomfortable viewing”. Several in the audience found it a compelling idea but far too long and badly in need of “tighter artistic editing”. Others felt a “sense of connection with the characters” but alienated from some of the violence and brutality and its “shocking impact”. In one response, the point was made that the characters were “too soap-opera” but the film was “intriguing and entertaining”. Another member of the audience felt that the film was “over-ambitious” in trying to link the three stories together and that “lack of clear directorial purpose” showed in the “lack of resolution of ideas and characters”. Probably, the most critical comment was also the most succinct: “disjointed and boring”. Nevertheless, praise for and pleasure in the film was the clear response of the majority of comments received.