Set in germany in 1945. Lore and her four younger siblings are left to fend for themselves when their Nazi/SS parents are arrested. A traumatic journey across war-ravaged Germany follows. 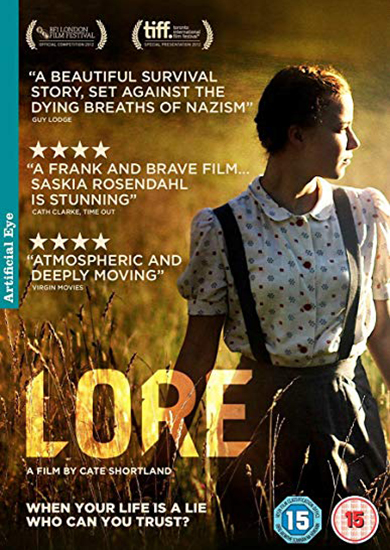 Australian director, Cate Shortland, has made a stunning film about the collapse of Nazi Germany, seen not from a Berlin bunker but through the eyes of a 14 yr. old girl, whose S.S. father and mother, complicit in war atrocities, have disappeared to face the music. Lore (Saskia Rosendahl), now in loco parentis, must conduct her four young siblings from the family home in Bavaria, to their grandmother’s farm, 500 miles to the north, outside Hamburg. Travelling on foot through a countryside littered with corpses and scavenged by starving natives like themselves, the children survive by trading their parents’ jewellery for food, ever mindful of the occupying forces, - Russian and American – closing in. The film superbly reveals a nation in denial of it’s crimes, such as the scene in which an old German matron stares at a portrait of the late Fuhrer and says “ we broke his heart… he loved us so much”. In Lore herself, this devotion to the fatherland fights with a dawning awareness of the colossal infamies committed in its name. Only when a Jewish survivor of the camps, Thomas, attaches himself to the family, do we see how madly divided Lore is, contemptuous and clinging at once. Cate Shortland directs with a rigorous honesty and prospers from at least three vital decisions: first to film the script in German; second, to hire the brilliant cinematographer, Adam Arkapaw; and third, to have chosen the remarkable Saskia Rosendahl to play the lead, an unsympathetic character yet fiercely and fallibly human to her fingertips. This is an outstanding piece of work.
Anthony Quinn – The Independent - February 2013
Her name is Lore (pronounced like Laura) and from all appearances she is your typical petulant 14 yr. old. But then reality sets in. Lore is an adolescent in 1945 Germany. The war is coming to an end and the American and Russian occupations are beginning, which means that her S.S. father and her similarly connected mother are about to be arrested. Lore must shepherd her four siblings across the country to her grandmother’s home. It’s a journey fraught with danger, starvation and illness. Lore is stolid and angry, unhappy with the responsibility but unwilling to shirk it. She quickly realises what she’s up against. Other Germans aren’t going to give any help, seeing the youngsters either as a burden or potential prey. Her only ally turns out to be Thomas, who joins them and ends up leading them. He’s a good-looking teen, a little older than Lore – but Thomas has a number tattooed on his arm and carries identity papers with a sewn yellow star. He is a Jew – escaped from a concentration camp. So Lore takes an immediate dislike to him – she’s spent all her life having anti-Semitism inculcated into her. Now the reviled Jews are not just seen as a plague on society but they have become a source of national shame through their very victimhood. Saskia Rosendahl is a stunning young actress, who does a lot with a little – her face set in scowl, fear or a sense of confusion. Rosendahl shows us an unformed soul – a teenager at the point where she thinks she understands the world just as it’s turned inside out. She captures the sense of someone drawing on reserves of strength heretofore unrealised.
Marshall Fine – The Huffington Post - February 2013

What you thought about Lore

There was a general sense across your responses that this was a film to be admired but not necessarily to be enjoyed! ‘Disturbing but well worth the effort’; ’Harrowing yet extremely memorable’; ‘A very good film albeit with a somewhat odd ending’; ‘A very good film – but I didn’t like it’; ‘I was glad when it finished’; ‘Terrifying’; ‘Not fun viewing but very powerful’; ‘Grim but very interesting’; ‘All the characters are understandable but none are likeable’; For some, the film was almost too much to bear: ‘Gruelling’; ‘I’m exhausted after the film’; ‘Depressing, sad story’; ‘Disturbing’; ‘The despair oozed out of my soul’; ‘So sad and so moving’; ‘Thought provoking and very moving’; ‘Unremitting gloom’; ‘Sad world’; ‘Grim, grim, grim – I hated the whole film – so distressing’; ‘Emotionally draining’; For many, however, the film had considerable merit: ‘Brilliant’; ‘Beautiful’; ‘Utterly gripping’; ‘Beautifully acted portrayal of a traumatised, confused teenager faced with enormous responsibility’; ‘Superb actors’; ‘Remarkable performances’; ‘Gripping with very strong performances’; The subject …: ‘Captured a time when Germany was coming to terms with what Hitler had done’; ‘A subject rarely explored’; ‘Well reflected the confusion of the times‘; End of innocence told with grace and power’; ‘A tale of an impossible journey – both mental and physical’; What a story – beautifully filmed with lots of twists’; And the production…: ‘Exceptional camera work’; ‘Beautiful cinematography’; ‘Camera work was best bit’; ‘Beautiful, elliptic imagery’; ‘Excellent background music’; ‘ Natural sounds balanced with fabulous music’; ‘Superb photography and tension throughout and clever use of music’; But, for one person: ‘Too many over-close shots with hand held cameras – made me feel ill!’ And for others: ‘A bit long’; ‘A rather boring film’; ‘Not altogether convincing’; ‘Rather boring and predictable’; Also, there were clearly issues concerning continuity and realism: ‘Poor continuity and progression’; ‘Why so much eye make-up’; ‘The continuity director didn’t focus on the details – no beard, always had cigarettes, no boots – and then shoes’; ‘Totally unrealistic for post war Germany – actors too plump. Rather like a Duke of Edinburgh excursion’; …. And recognisably, there was a resonance with today’s world events: ‘Another “harrowing” in the Borough Hall – we know it happened “then’ and is still with us in Syria today’; ‘Similar tales continue across the world in spite of our experience’; Final comments: ‘Far too good for the Oscars!’; ‘I think we know why it didn’t get an Oscar!’; … a not uncommon perspective from a GFS audience.