A stirring story of 10 year old Wadjda, a girl whose indomitable spirit is pitted against the forces of a highly conservative culture. First feature film from a Saudi woman director. 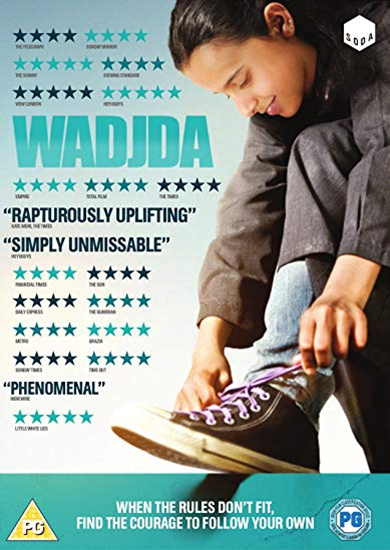 As a narrative ‘Wadjda’ has an earnest but gentle comic tone of the style of a ‘kid’s compete’ documentary. It merits recognition for its freshness and as the first feature film ever to have been entirely shot in Saudi Arabia and by a female director at that, Ten-year-old Wadjda is a rebel - wears jeans and baseball boots under her abaya, listens to western pop music on the radio, hangs out with a boy, Abdullah and has her own small business, selling plaited friendship bracelets to her friends. When Abdullah crows about having a bicycle, Wadjda is inspired to try to raise the money to buy one for herself. As in ‘Bicycle Thieves’, a bike symbolises freedom, with the added potency that the riding of one by a woman is widely frowned upon. The limitations and humiliations conferred by her sex confront Wadjda everywhere but she is astute enough to realise that she can by-pass social or religious approval if she is financially undependent. In the midst of patriarchal dominance and her mother’s fraught marriage, Wadjda is a wish fulfilment figure, a tomboy super-heroine, who answers back to bullies and makes rakish little gestures of defiance. There is a sense of optimism in her indefatigability. This film makes clear certain realities of female life experience in Saudi Arabia while also proffering comfort in the form of hope for a fairer future.
Hannah McGill – Sight and Sound (BFI) - August 2013
You’d need a heart of stone not to be won over by ‘Wadjda’, a rebel yell with a spoonful of sugar and a pungent sense of Riyadh society, split between the home, the madrasa and the shopping mall. Waad Mohammed plays the 10 yr. old heroine who enters a Qu’ran reading competition to raise funds to buy a bike – much to the horror of her imperilled mother and imperious teacher. In conservative Ryadh, we are told; girls do not ride bikes and are barely even permitted to laugh out of doors. As the first woman ever to shoot a Saudi Arabian feature film, writer/director Haifaa Al Mansour has already assured herself of a small place in history. And yet, ‘Wadjda’ stands on its own merits. The road through is dusty, bumpy and fraught with danger. But up ahead lies the scent of a happy ending. Wadjda knows it is there and bears down on the pedals.
Xan Brooks – The Guardian - July 2013

What you thought about Wadjda

Clearly this was a film that was much appreciated by the vast majority of the audience. With a particularly high number of responses from an audience of some 135, the number of ‘Excellent’ and ‘Good’ scores is remarkable. The variety of descriptors used is worth noting: Wonderful, delightful, gentle, extraordinary, sensitive, insightful, moving, heart warming, informative, courageous, fascinating, charming, edifying, poignant, educational, empowering, brilliant, authentic, first class, touching, marvellous, thought provoking, gently charming – a miracle! The contrast between the values that are common to our society and those of Saudi Arabia were immediately apparent: “Depressing treatment of women”; “pulls no punches about the culture”; “a great insight”; “an intriguing presentation of life there and the treatment of women”; “put the many issues across without prejudice”; “most of us are probably quite ignorant of (middle class) life in Saudi and indoctrination into the teachings of the Koran”; “a glimpse of Saudi life that, as a visitor to Riyadh, I have never seen”; “interesting exposure of an interface between Western culture and Islam”; “showed the hypocrisy and tragedy of the life that people live in other parts of the world”. That the film was made at all – and by a female director was a significance that many acknowledged: “Very surprised that the film was allowed to be made”; “behind the scenes, things are changing but very slowly – here is a spark of hope for the future”; “sadness and hope entangled”; “great to hear that it may already have changed attitudes to cinema and women riding bikes”! Many of you commented on the quality of the acting and direction: “Given the lack of experience of the cast, this was a very believable performance”; “amazing young actress”; “loved the comical elements, the high quality of the acting and the production as a whole”; “a bravely told story”; “some lovely characters that do not fit a Western perception of the Arab World”; “a bit like Jane Austen – but people of substance”; “plenty of feel good factors”; “astonishing in all departments especially given the number of ‘firsts’ involved”; “may it win! The first of many I hope”; “the courage of Haifaa Mansour in making the film deserves an Oscar”; “it seems almost impossible for it to have been made openly”. Some more general observations: “A most interesting and important social document – a lot to think about”; “reminds us all of the things we take for granted”; “this film will resonate”; “and we think we have something to complain about”? There were some reservations however: “Interesting but rather slow moving”; “over simplistic”; “over stretched for a ‘slight’ plot – but some wonderful moments”; “a little long”; “very, very slow in parts”. Some final comments: “A refreshing lack of incidental music”; “a lovely ending”; “7 years old – and a ‘wife’! Can this be true”?; “is ‘Abdulla’ a ‘hope’ for change for the better”?; “a very plucky young girl”; “I hope that they did marry”!; “nice to know that teenage girls are the same the world over”! (Quote from a father of 3 girls); “exactly the sort of film that a film society should be showing”.