Master chef, Chu, lovingly cooks large Sunday dinners for his three daughters. Full of delight in food and the fascinating and surprising complexity of family relationships. 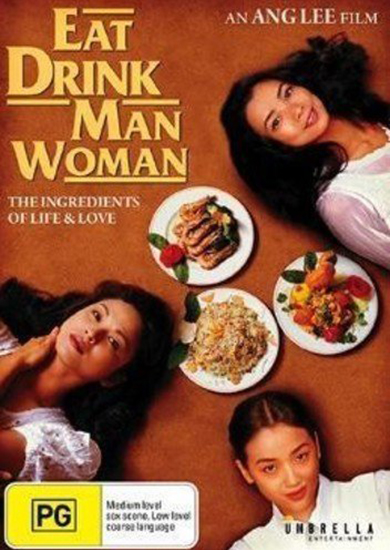 On the heels of his recent international success, Ang Lee has directed the ambitious and entertaining ‘Eat Drink Man Woman’. Again his focus is on the family and his themes are universal. The tale centres on Chin, a master chef, who’s literally lost his sense of taste. The widower lives in Taipei with his three adult daughters, each of whom, consciously or otherwise, is itching to leave the nest. The tangle of relationships of the three daughters and of Chu with Madame Liang next door becomes extremely dense. While the essential components of the film are serious, Lee’s touch is light and his approach anecdotal. There is a leisurely laying out of the emotional geography. As one of the daughters notes “he communicates by eating”. In fact the ritual of preparing food is a means to avoid interaction. The script is steeped in food metaphors and illusion but neither food nor love is finally enough. It’s the former that prevails and allows the crushing aspects of life to be unburdened. In one climactic scene, the effect is refreshingly hilarious and that insight into humanity is what makes ‘Eat Drink Man Woman’ such a winning recipe.
Leonard Klady – Variety - May 1994
‘Eat Drink Man Woman’, directed by Ang Lee, has a beautiful balance of elements. Mellow, harmonious and poignantly funny, the film uses the prism of the old man’s artistry to examine his life and his relationships with his three headstrong daughters. A prickly widower who keeps a careful check on his emotions, Chu has begun to question the meaning of his life. His daughters, all three of whom still live at home, don’t do much to raise his spirits. Though the father and the daughters share the same house, their paths seldom cross except on Sundays when Chu whips up a feast for their family gathering. For Chu, food is a means of expression of the feelings of love and affection he can’t otherwise articulate. As the relationships evolve and deepen, there is a surprise round every corner. Yet we become involved with these people and the fullness we feel at the end is far more rich and complex than the most extravagant meal. ‘Eat Drink Man Woman’ is something like food for the heart.
Hal Hinton – Washington Post - August 1994

What you thought about Eat Drink Man Woman

There was a warm and appreciative response to Ang Lee’s “festive food and film feast” about the master chef and his three daughters. Many of you enjoyed the fact that it “was full of humour in ordinary situations” and that it was a “delicate, sensitive and wryly amusing portrayal of a real family”. The gentle pace of the film and its absorption in food also gave the audience pleasure, offering insights into a way of life “so very different from our own”. It was, for a great many of you, “beautifully made, with food beautifully depicted” and there was a range of tributes to the director’s skill with the photography and the slow and careful exposition of daily events – “a master of the film medium”. There was pleasure too, for many in the audience, in the “gentleness and kindness” at the heart of the film, which some of you felt was all too lacking in many films today. The filming of the cooking sequences was “a great delight – one could almost smell and taste the dishes”. The respective journeys of all the characters, in the course of the film carried “all the imperfections and happiness of normal people’s lives” and this rooted the film in “a reality as tangible as the amazing cooking and preparation scenes”. The film was memorable and refreshing in marked contrast to the “wall-to-wall Christmas fare being served up on TV at present”. It held many in the audience by “its poignancy, emotional interplay and gentle intimacy” which together with “beautiful acting” made a “very moving film”. It was, as one response put it, “able to be sentimental but not saccharine” and the “ingenious exploitation of the metaphor of food” gave the film “depth and dramatic momentum”. For one viewer it had “something of the fairy tale about it”, particularly in the way it portrayed the mutual relationships of parents and children in the particulars of everyday life. There was barely a dissenting phrase in all the praise for the film, except a sense for some that it was “rather long”. Overall, however, the verdict was that the film was “subtle, unusual and compelling” and a joy to watch.