The Lost Honour of Katharina Blum

A young woman's life is scrutinised by police and the tabloid press after she spends the night with a suspected terrorist. Adapted from the novel by Heinrich Boll. 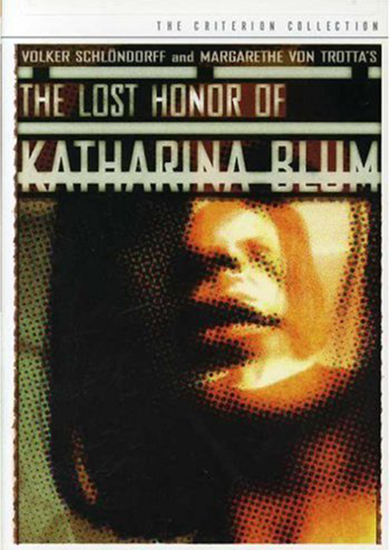 West Germany 1971: At the height of the scare over the terrorism of the Baader Meinhof gang, a bank was robbed and a guard killed. The next day, without evidence, the nation’s largest newspaper blamed the gang for the crimes. Heinrich Boll, the Nobel-winning novelist, condemned this trial by headline and wrote the best-seller ‘The Lost Honor of Katharina Blum’ as a result. It has now been turned into an intelligent film. Katharina Blum, a young girl, a maid in the home of a prosperous attorney, meets a terrorist who is hiding from the police, something he neglects to tell her. She spends the night with him, is arrested after he escapes and is immediately branded by the press as a terrorist and worse. Her apartment is ransacked, she’s handled roughly and her personal life is combed for clues. The experience is degrading but the police, at least, are doing their job. What she can’t stand is the treatment of her case in the popular press. They spy on her, invent quotes and episodes out of thin air. Her picture is on the front pages day after day, with lurid accounts of her sex life, her politics and her morals. She was a quiet, perhaps even dull, young woman; now she’s notorious and hated by strangers. Katharina Blum is played with a mixture of shyness and fire by Angela Winkler. The character development is sensitive; all sorts of little touches are painted in, making an essentially human story.
Roger Ebert – Movie review - October 1976
‘The Lost Honor of Katharina Blum’ is about the victimisation of a poor but proud young woman who works as a housekeeper and who has the bad luck, to pick up and take home from a party, a young man who is suspected by the police of being a terrorist. In a period of several days, Katharina’s privacy and particularly her honour are destroyed. First by the police, who terrorise her and then by the gutter press, which creates, in her name the image of a politicised Bonnie Parker, beautiful, heartless and on fire for the communist cause. Though Katharina is quite quickly cleared, her life has been ruined. The film sees Katharina close up. The mystery of her passion and her resolve is maintained by the carefully controlled, implacable performance of Angela Winkler.
Vincent Canby – New York Times - October 1975

What you thought about The Lost Honour of Katharina Blum

There was an appreciatively thoughtful response to Scholondorff and von Trotta’s classic German political drama from the 1970s. There was a strong sense of “engagement combined with a huge sense of injustice” at the events surrounding Katharina Blum, generated by “the power of the way the story unfolded” and “an outstanding”, “riveting”, “remarkable” “powerful and burning” performance by Angela Winkler as Katharina. The topicality of the piece struck many of you: an “irresponsible”, “sensational”, “heartless and intrusive” national press which was at the centre of the film, rang many “contemporary and current concerns” in the context of recent press events in the UK. This “chilling and powerful” factor contributed to the power of the film for many. The sentiment of “what goes round comes round” or “plus ca change……” struck many of you. One member of the audience expressed it as “no ‘News of the World’ is good news”. The film was perceived as “timelessly relevant, forty years on”. Linked to the theme of the press alone, was a sense of “an ominous collusion” between a “dubious police force” and the press, which struck several of you as “powerfully prescient” about current concerns about police integrity. The skills of the directors received general praise in the way the story was told and the sense in which there was an “immediate and enduring identification with and sympathy” for Katharina herself. For one member of the audience there was “delight in her revenge”, for another “a sense of outrage at the emotional violation of the central character, so “cleverly communicated” by the camera work. Within the context of this general praise there were some reservations. One or two responses thought that the film was “overlong” and “too complicated in the story-telling” and sometimes “a bit disjointed”. One opinion was that the whole “gentleman friend” events were “a distraction” from the central impact of the film. There was the view also that it was “stilted and awkward at times”, despite “thought-provoking” issues and that the portrayal of the gutter press was “a bit over the top”. Some of the points made were “a bit heavy-handed”; one viewer felt “bludgeoned into a response” and a couple of others felt that the epilogue was a “clumsy and unnecessary addition” as the points had been made with greater subtlety in the film itself.