Electrifying drama with masterly control. Lucas, a much loved kindergarten teacher, has his world shattered when facing an accusation from a girl in his class. Heartstopping tension and great intelligence. 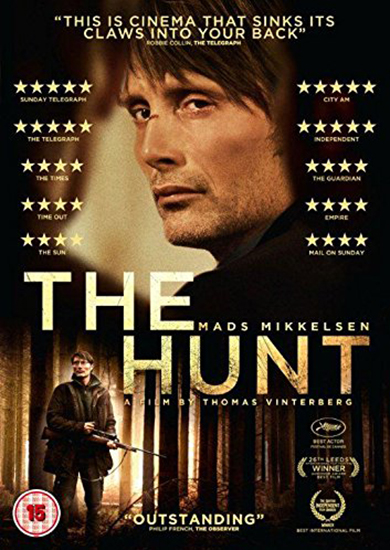 This outstanding film ‘The Hunt’, scripted by Vinterberg and Tobias Lindholm, is set in idyllic rural Denmark, in a small tight-knit lower middle class community, with child abuse and the effect of its revelation the key issue. In this film, the alleged perpetrator is shown from the start to be innocent, with the embattled hero, Lucas, a victim of something deeply angry in Denmark’s complacent society and the dangerous little lies told by an innocent child. As shown by excellent photography, the time is late autumn, the nights are drawing in and there are both falling leaves and a few odd snowflakes in the air. Lucas is going cheerfully about his temporary job at a small nursery school, after fighting a bitter battle with his ex-wife over the custody of their teenage son. Things are looking up, personally and professionally, when a little girl, Klara, tells the school administrator that Lucas has exposed himself to her. First slowly, then rapidly, Lucas is buried in an avalanche of suspicion, the very weight of which turns accusation into conviction. Lucas, the decent man, marginalised by social change, is transformed into a threat to the community, a dangerous figure, someone to be ganged up against. Only his son and the boy’s godfather stand beside him. It’s a frightening and all too convincing story that has its parallels in current events in Britain where deep waters are being plumbed by the Jimmy Savile affair. Eventually the movie comes to a climax during a Christmas Eve service in the local church, where the whole community is confronted by Lucas and they are forced to confront themselves.
Philip French – The Observer - 2012
In ‘The Hunt’, Lucas (Mads Mikkelsen) a disgraced kindergarten teacher suspected of being a paedophile, naively believes his true nature will reveal itself: in this case his innocence. But this nightmarish story of an innocent man who becomes the victim of a small town witch hunt results in a strong and gripping film. The life of Lucas, a much-loved teacher, begins to fall apart when a little girl vaguely intimates to a teacher that Lucas exposed himself to her. Before long other children, responding to grown-up suggestions, help to build up a case against Lucas as predator. Villagers are convinced of his guilt and his life is in danger. ‘The Hunt’ is a merciless examination of the fear and savagery boiling just below the surface of bourgeois life – an undercurrent of potentially explosive violence. The self-righteousness of those eager to believe the worst is as galling as it is believable. Why do adults so readily believe the words of confused young children?
Stephen Holden – The New York Times - 2012

What you thought about The Hunt

There was an appreciative, thoughtful and concerned response to Thomas Vinterburg’s troubling film, “very much a film for the times” as one response put it. This “highly charged”, “emotional” and “harrowing” film, with its portrayal of “social cruelty”, “bigotry” and “dangerous ignorance” reminded several in the audience of Arthur Miller’s ‘The Crucible’ with its concentration on a witch hunt and social hysteria. Several responses made the point about “how easy it is for an unfounded allegation to escalate into anger, violence and social ostracism” and “how frightening it is that an apparently ordered and peaceful town could descend into primitive barbarism” so quickly. For another member of the audience ‘the statement about the evil within us’ made by the film was “troubling and disturbing”. This “intense and hard-hitting film” was powerful because of its “all too believable portrayal of the way normality can descend into horror of group think”. Several responses commented on the “excellent cinematography” and the use of the autumn landscape and the onset of winter to “provide an emotional context for the unfolding of events”. The power of the acting, particularly Mads Mikkelson as Lucas and the little girl who played Klara, was highly praised. The ending of the film divided the audience’s opinion. For some it was “perfectly judged”, “a reminder that evil lurks in the darkness despite apparent social resolution”; for others, it was “confusing” and “ran counter to the moral bearings of the film”. A small number of responders were less impressed than the majority of the audience. The film was “harrowing but unconvincing and easy to pull to pieces” and “an unedifying story, albeit well told”.