A deft comedy with one of the most interesting female characters in Japanese cinema. Penniless and pregnant, Mitsuko, back in Tokyo, returns to her former landlady in a tumbledown alleyway, full of downtrodden characters. Headstrong Mitsuko starts to take local matters in hand. 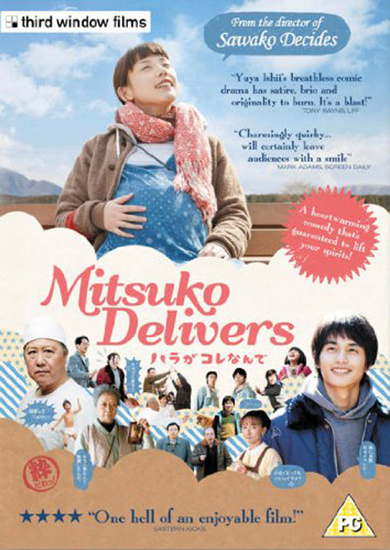 In this film, the prolific Japanese independent director introduces a relentlessly upbeat heroine who forces the saddest losers around her to adopt her optimism. At 24, Mitsuko is jobless, penniless, pregnant and abandoned by the African American boyfriend she followed to California. More overcome by the plight of a laid-off worker on TV than by her own situation, she follows a philosophy of “wait until the wind blows and then go with it”. Mitsuko returns to her childhood neighbourhood and proceeds to organise everyone’s lives, from her bedridden landlady to her childhood sweetheart and browbeats a friend to declare his long-hidden love of a café owner. Through scenes from Mitsuko’s childhood, the director traces how her attitudes came from the landlady and her determined optimism. Through this central, delightful but infuriating heroine, Ishii presents spontaneity and fearlessness in the light of the unknown – an anomaly in mainstream Japanese culture, where the pressure is to plan everything and follow the herd. All this is fine, light-hearted fare, boosted by witty dialogue and good characterisation.
Maggie Lee – Hollywood Reporter - October 2011
The director, Yuya Ishii, is known for his dead pan humour and social compassion and his new film ‘Mitsuko Delivers’ is similarly themed. This low-budget film enables Ishii to make pointed observations about wider social concerns, seen through the eyes of a young woman facing her own personal crisis. Mitsuko is a 24 year-old mother-to-be, left pregnant and dumped by an uninterested ex-boyfriend. She has returned to Tokyo to the rundown area where she spent a few years as a young girl. Here she reconnects with her old landlady and a former boyfriend struggling to run a restaurant. Her overbearing parents are unaware of her return and her pregnancy. Mitsuko displays a confidence and resolve that puts the worries of those around her to shame. Riisa Naka is dazzling in the title role, anchoring the film’s farcical tendencies with a strong, funny, compassionate performance which shows she’s much more than a pretty face. On a wider level, the director sets his sight on economic hardship and tough times and their impact on ordinary people.
Eat, Sleep, Live, Film - May 2012

What you thought about Mitsuko Delivers

An unusual feature in these responses was that the largest category was ‘average’ suggesting a mix of pleasure and perplexity in Yuya Ishii’s film. Several responses noted the ‘gentleness, humour and kindness’ of the film ‘unusual humour which felt uncomfortable’ and ‘full of philosophical platitudes’ about following the winds and the clouds. There was plenty of praise for the ‘strong performances’ particularly Riisa Naka who was mesmerising as Mitsuko, but for many the film remained ‘baffling, strange’ and, as one respondent put it ‘like a comic strip with actors’. But there was a range of stronger and more appreciative comment beyond the somewhat cautious middle ground. ‘Fantastic characters’, ‘a sensitive and courageous film about kindness and generosity’, ‘full of crazy humour’ and serious about ‘the redemptive power of optimism’ were noted as central to the film’s impact and purpose. The director was congratulated for making a film about ‘goodness and kindness’ that was pitched at ‘everyday difficulty and poverty’ and ‘never became sweet and self regarding’ nor glossed over hard economic times. One member of the audience enjoyed ‘being blown in all directions by the spirit of the film’ and several others valued the ‘insights into what is often an inscrutable Japanese culture’ and felt that the film exposed ‘huge differences’ between Japanese and British societies. Several in the audience warmed to the ‘get on with it’ optimism of the central character and were left with the sense of an ‘extraordinary and delightful film’. Those who disliked the film recognised the quality of the performances but found the film ‘culturally at odds with Western values’, ‘far too long’ and ‘totally unJapanese’. It was ‘boring and pointless’ ‘like an unfunny Laurel and Hardy’ and ‘confusing in the time shifts between generations and events’ and, as one comment put it, ‘it took far too long for the wind to blow’. Lively responses depend upon mixed reactions and this film certainly provoked different opinions. One response summed up the ambiguities of the film neatly –‘It was Mike Leigh meets Brian Rix’.