Delicate, considered and complex family drama about a divided Japanese family and two brothers who long for family unity. A rich and fascinating narrative. 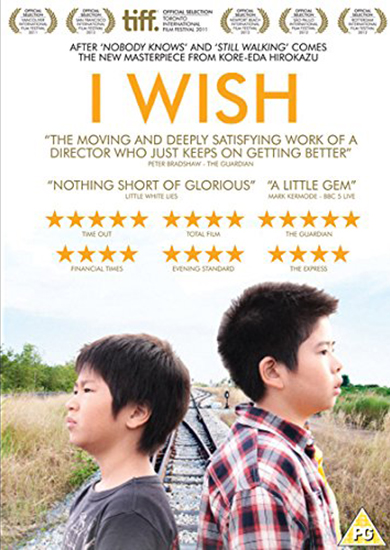 One of the year’s best films has arrived quietly, unnoticed by the awards-season cheerleaders. In its delicacy and complexity, it puts many films to shame and although it has taken two years to reach the U.K. it has been more than worth the wait. This is a deeply considered Japanese family drama about the powerful imperative of family unity but also about the inevitability of families finally disintegrating and allowing everyone a painful kind of freedom. A miracle is longed for by two brothers, around 9 or 10 yrs. Old. Their mum and dad have broken up: Nozomi has returned to live with her parents and taken a demeaning job in a supermarket. Meanwhile, the father Kenji stays in Osaka where he pursues the laid-back slacker life-style that so infuriated his wife. The difficult and upsetting thing about this arrangement is that the warring parents have taken a child each. Withdrawn, thoughtful Koichi has gone to his mother and grandparents; easygoing and smiley Ryunosuke has gone to live with his dad. As this supposed temporary arrangement hardens into permanence, Koichi hatches a strange and poignant plan. He has heard that two newly-built bullet trains create a supernatural energy at the point where they pass each other. If the boys can contrive to be together and make a wish at this focal point, their happiness can be restored. Part of the film’s wisdom resides in declining to take a view. There is a resolution of sorts. Koreeda has established himself as a supremely intelligent and valuable film maker. ‘I Wish’ is the moving and deeply satisfying work of a director who just keeps getting better.
Peter Bradshaw – The Guardian - February 2013
Hirokazu Koreeda’s new film ‘I Wish’ is a bittersweet tribute to the dreams and hopes of childhood. The story centres round two brothers who have been separated by their parents’ divorce. Koichi is with his mother and grandparents in a sleepy town. Ryun is 150 miles away with his father, a teenager in a man’s body, still clinging to his dreams of becoming a rockstar. Koichi wants nothing more than his family to reunite, while the more carefree Ryun is less keen as he still remembers their parents’ arguments. One day at school, Koichi learns of an urban legend claiming that anyone who witnesses two bullet trains crossing will have their wish fulfilled. Within the journey, as the boys and their friends get to that point, Koreeda allows so much warmth and wonderful moments, as they are perfectly fitted together to feel like authentic slices of life. The film has bags of pathos and insights about life and childhood that ring true. It is a humble masterpiece of a movie and Koreeda’s reputation continues to flourish.
Jean De Vaux – London Film Review - 2012

What you thought about I Wish

Another well received film: “A wonderful, gently paced, sensitive film to languish in”; “delightful”; “amazing”; “moving”; “powerful”; “touching”; “loved this gentle and moving film”; ”a memorable film”;” totally absorbing”; “a lovely warm film”;” sensitive and compelling; sweet”; “charming little tale of hope and acceptance.” – although a few found it a rather too sentimental: “Nearly edged into ‘saccharine’; too cutesy.” The subject matter was quite compelling: “A beautiful film about childhood and dealing with split families”; “delightful capture of childhood – friendships, loyalty, sense of adventure”; “a rare and much appreciated insight into childhood in another culture”; “beautifully observed portrait of childhood and growing up”; “illustrated that children are the same the world over”; “ultimately a film about coming to terms with reality”; “I enjoyed the ‘innocence’”; “gave a child’s perspective – bittersweet.” …. And the discipline and self-reliance of the children was noted: “A subtle film contrasting the discipline expected of children with their feckless parents”. (Probably the reason it is not popular in Japan!)” Some were rather surprised that the film held there attention so well: “Slow start that developed into a great story”; “considering that the film was 2 hours long and very little happened, surprisingly, I was engrossed the whole time because the child actors were so engaging.” It is pleasing that some members of the audience were able to comment on the ‘reliability’ of the film’s ‘context’: “Kochi beautifully portrayed”; “nicely depicted ordinary lives in provincial cities in Japan”; “showed real daily family life in Japan”; “revived memories of 40 years ago of the bullet train.” Significantly, however, it was the children’s remarkable performances that impressed: “Sensational performances from the children”; “child actors were amazingly good”; “beautiful portrayal of a mixed bunch of youngsters and the way they interacted”; “hard to believe that the children were acting at all;.” And: “The title of the film should be ‘Eating and Running’”; “felt exhausted with all the running”; “loved the way the kids ran everywhere.” By the way: “The ‘brothers’ are real brothers and a popular pair of comedians!” Comments on the overall approach to the film were also positive: “I liked the humour”; “very funny; lot of fun”; “I watched most of it with a smile on my face”; “gentle music”; “lovely and unobtrusive music”; “music was interesting”; “lovely soundtrack”; “photography and direction was exemplary”; “beautifully filmed”; “a rather fragmented approach but touching”; “really enjoyable – a charming set of vignettes held together by a simple story line”; “an imaginative scenario – very unusual” However, the film was criticised by many for its length: “It was too long”! “Plenty of humour but far too long”; “slow”; “lyrical but uneventful”; “better if it were 30 minutes shorter”; “too long and rambling”; “fragmented and over long”; “boring in places.” Final comment: “A Japanese 'Railway Children’ perhaps?”