A private detective stumbles on a murder. Superb cinematography and stunning performances from Faye Dunaway and Jack Nicholson. 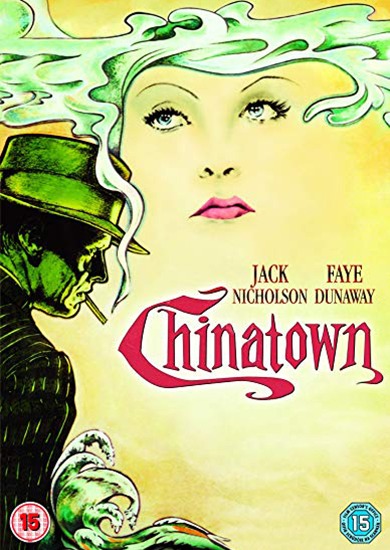 “Politicians, ugly buildings and whores all get respectable if they last long enough” says John Huston’s crooked construction magnate Noah Cross, in this remarkable film by Roman Polanski, now nationally re-released. What the passage of time has done for this superlative 1974 film is progressively lessen our sense of its being a modern pastiche of a 30’s gumshoe thriller. The time-gap has narrowed and it now looks like a classic, in a direct line of succession to those earlier pictures. Jack Nicholson has the Bogartian role of Jake Gittes, the L A private investigator who sticks his nose into a corrupt conspiracy in the state’s Department of Water and Power. The plan is to create a drought in California, sending farmland prices into a dustbowl slump, so that it can be bought cheap and made the site of a colossal new dam, to be sold back to the taxpayer at a huge profit. Jake finds himself falling in love with the mysterious Mrs Evelyn Mulwray (Faye Dunaway) at the centre of the murky plot. The dialogue is crackling (“Are you alone?” – “Isn’t everyone?”) and the set pieces are just superb. Polanski brilliantly shows that money and power are not what’s motivating everyone after all. There’s a lower stratum of sexual dysfunction and fear at work, which is difficult, if not impossible, to understand the ultimate meaning of the chaotic ‘Chinatown’ of the title. Unmissable!
Peter Bradshaw – The Guardian - January 2013
The season of Roman Polanski’s films at the BFI kicks off with his very greatest, a Californian ‘noir’ about water and power with a strong undertow of Greek tragedy. “Forget it, Jake – it’s Chinatown” goes the famous last line, yet everything about ‘Chinatown’ is memorable, starting with Robert Towne’s Oscar-winning script, Jack Nicholson’s most nuanced performance, Richard Sylbert’s exquisite production design, John Alonzoz’s burnished photography and Jerry Goldsmith’s tense mournful score. It all clicks together with the precision of a Swiss watch. Polanski appears himself as a malevolent knife man who cuts Nicholson’s nose to spite his face – and even the bandage put across it became unforgettable.
Antony Quinn – The Independent - January 2013

What you thought about Chinatown

There was a warmly enthusiastic audience response to Roman Polanski’s 1974 Californian noir thriller ‘Chinatown’. From your responses it clearly merited its ‘classic status’. There was a great deal to enjoy; “dramatic pace and tension from the beginning”, “a sense of corruption and mystery”, “darkness lurking beneath the surface”; “stylish and taut with tension from the very beginning”. The director involved the audience through an “excellent atmosphere and haunting music”, and maintained “dark and increasingly corrupt sequence of events with a consummately skilful hand” and was “not afraid to take his time, without ever sacrificing the excitement”. There was a series of superlatives for the two central acting performances from Jack Nicholson and Faye Dunaway”, “electric and powerful”, “subtle, full of nuances and thoroughly convincing”, “a brilliant evocation of mystery and deception”, “Jack Nicholson at his triumphant best”, “riveting acting, compelling and absorbing”. Many of the responses praised the “tense and atmospheric score” and its dramatic contribution to the action and events as they unfolded. Several of you praised the “clever and intelligent control” of the director and the “stylish skill and panache” that the photography and production design contributed. All in all, there was almost no dissenting voice from the feeling that the film was a remarkable combination of elements which constitute a ‘timeless classic’.