A Cat in Paris

Whimsical and attractive animation; the tale of a little girl and her very intelligent cat in a world of cops and robbers. Beautiful visual style, with rooftop chases over and around the Parisian skyline. 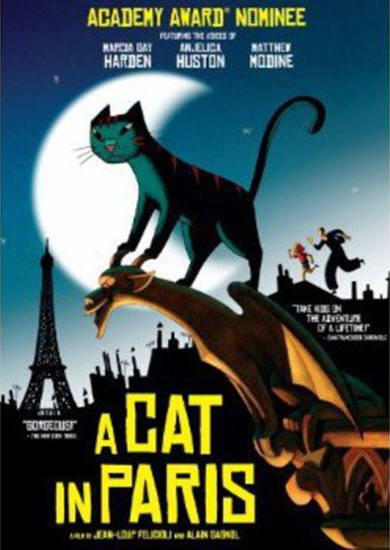 ‘A Cat in Paris’ is a slick entertainment in which blustery gangsters, intrepid detectives, cat burglars (one of them literally feline) and a little girl named Zoe, scamper across night-time rooftops unravelling a pleasantly tangled plot. The director and writer Jean-Loup Felicioli and Alain Gagnol take splendid advantage of the freedom that animation can offer to the hand, the eye and the imagination. Amidst the anarchy of delightfully off-kilter images, there is also an attention to emotional nuance and narrative detail which make the film satisfying as well as charming.

What you thought about A Cat in Paris

The French animation gave great pleasure to the majority in the audience. You admired the “delicate visual dimensions”, “the stunning point of view of the Paris rooftops” and the “cleverly plotted, not entirely serious, crime-chase storyline”. It was “a film for all ages, engaging, entertaining and strangely believable”, “so clever in its depiction of the little girl and her relationship with her cat and later the cat-burglar”. The film had a “paradoxical charm”, because “it combined dark elements with a fairy-tale energy for good” and managed to be “whimsical, but eminently watchable all the way through”. One viewer was touched by the “subtlety and delivery of the cat’s relationship with the little girl”, particularly as it played on the loss of her father and the way her mother was getting it all wrong. The director and the animators had “a direct and tender insight into childhood” and several of you commented on the moment when hitherto mute Zoe “exploded into talk” at the end of the film. One response summed it up” a delight…….French high humour, well filmed, excellent animation and a happy ending”.