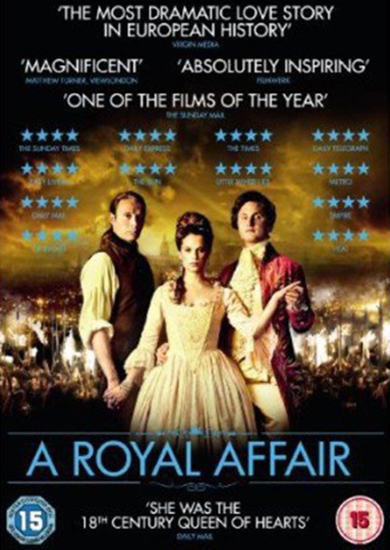 The film begins with a woman named Caroline composing a letter to her children about her lover, Johann. “I have to tell you about him. About us. Why we did the things we did” The story then flashes back to 1766, as Caroline is chosen to become the new Queen of Denmark. She is forced into marrying King Christian V11, a young and immature leader, whose love of acting is only eclipsed by his flair for making a scene. Over dramatic and childish, the King quickly undercuts the new Queen, on their first evening together. “Don’t steal my light” he tells her, warning her that he must be the main attraction in any room. The King continues to drive everyone around him crazy with his demands and outrageous mood swings and while he is travelling around Europe, his distraught advisers enlist the aid of Dr. Johann Struensee, to care for the foolish King. Struensee, a doctor who supports the enlightenment is pushed into a position of power in a nation ruled by reactionary nobility and religion. Gradually, Johann gives the King confidence to make leadership decisions and to adopt more liberal political choices. In the midst of this story, however, Johann and Caroline, the disengaged Queen, began an illicit affair under the eyes of the naïve King. The film is based on a true story and gains great strength from the impact and effectiveness of the three central characters, all of whom are able to earn our sympathies. It is a well-told story about three people who ultimately change the future of Denmark for ever.
John Hanlon – Big Hollywood - November 2012
The principles of the Enlightenment, first took practical shape in Denmark in the 18th C. The ideas of Voltaire and Rousseau arrived there under the arm of Dr.Johann Struensee, a German physician hired to take care of young King Christian V11 and eventually took very good care of his new Queen from Britain, Queen Caroline Mathilde. Their risky love affair and clandestine guidance of Danish politics provide rich material for ‘A Royal Affair’. Dr. Struensee finds the infantile King to be putty in his hands and when they return to Copenhagen, Caroline in love with the doctor and with his radical and advanced ideas, uses her influence with the King to change the nation’s history. The Doctor persuades the King to take command of his Kingdom and one reform follows another to the consternation of the suddenly powerless court. The film makes excellent use of locations in Prague, but the film goes beyond historical romance, revealing the tensions and dangers experienced by the brave young Queen.
Roger Ebert – Movie Review - November 2012

What you thought about A Royal Affair

There was overwhelming praise in the responses for the “fascinating and illuminating” Danish film ‘A Royal Affair’, particularly in the “dramatic light” it shone on a “scarcely known” aspect of Danish political history for British viewers. You found the film “engrossing”, “compelling”, “full of dramatic understanding” “hugely skilful” at creating the world of the Danish court and its “politics and unprincipled alliances”.

There was considerable admiration for the way the impact of Europe-wide ‘enlightenment’ ideas was “woven into both character and events”, with several audience members commenting how much they had learned. The dramatic tension in the film was also, for many, a “key ingredient in the film’s success” as “events and conspiratorial reactions unfolded”. “The clash of ideas in a most convincing historical setting” was, for some, “another gripping element in the drama”. “The tragedy and dreadful injustice” of the story struck several in the audience, giving the film “a contemporary relevance and depth” despite the 18th century setting.

This “powerfully told story” was also very widely praised in the responses for its “excellent photography”, “beautiful settings against a range of seasonal changes and convincing evocation of palace life” There was almost universal praise for the central performances of Mads Mikkelson as Dr. Struensee, Alicia Vikander as Queen Caroline and Mickel Boefosgaard as the wayward and delusional King Christian. The acting was “riveting throughout”, “a most convincing blend of passions and reality”, “extraordinarily engaging”, “full of feeling and sincerity” and “marvellous in every way”.

One or two comments suggested that the film was rather long and there was a feeling that more thought could have been given to the readability of the subtitles. Nevertheless, this was clearly a very popular and pleasurable film, given by several the accolade of “the best film of the season” and very widely regarded as “a superb finale to the society’s 2014 programme”.