Sixto Rodriguez, a 70's Detroit folk singer was an inspiration for a generation of musicians in South Africa. Following rumours of his suicide, a few fans in the 1990s set out to discover their hero's fate. Awardwinning documentary. 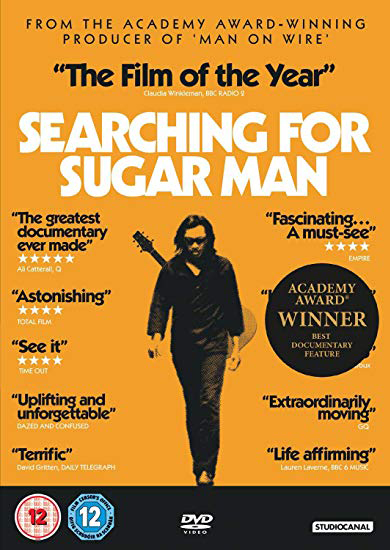 Since the 1970s, two South Africans, Stephen Segerman, a record shop manager and music journalist Craig Bartholomew-Strydom, have been fascinated by the Detroit-based folk-rock singer Sixto Rodriguez, through two LPs recorded in 1970 and 71. They made little impact in the US but had an immense impact in South Africa. Their eloquent attacks on injustice and oppression appealed to young white liberals, who saw in them themes inspired by troubles in 1960’s America, applicable to their own defiance of apartheid. Rodriguez became more popular there than the Stones or Elvis and his records outsold ‘Abbey Road’. Bartholomew and Segerman set out to track him down. Malik Bendjelloul, a documentarist making films on rock musicians for Swedish TV, met the South Africans and made a film of their pursuit, offering insights into the history of popular music, the vagaries of the rock scene and the nature of celebrity. The film is constructed in a teasing way around the hunt for Rodriguez, atmospherically setting up the crumbling Detroit where he lived and the overall elusive shadowy figure. Eventually, he turns up alive and well, via information from his daughter, almost a recluse reluctantly revealing himself in the run-down house he’s lived in for 40 years. It’s a revealing tale about show-business and its operations, of how someone could almost disappear without trace. But the ending is happy without being triumphalist. This modest, talented man didn’t become a star and has been turned into one only by rediscovery.
Philip French – The Observer - July 2012
All you have to know about this surprising and emotive musical documentary is that you should see it. Anyone who enjoyed ‘The Buena Vista Social Club’ will surely go for this too. It tells the unlikely story of Sixto Rodriguez, a gifted but way under-the-radar Detroit-based Hispanic singer/songwriter and it contains a deeply moving idea that an authentic spirit will, somehow, find its way to listeners’ hearts. Part of the strangeness of the story is that he was never a star in the first place. The records disappeared without trace, after their release, except in South Africa, where his music spread like wild fire among a white, liberal middle-class, resistant to apartheid. Rodriguez sold more records in South Africa than Elvis, but fans knew nothing about him beyond bizarre rumours that he’d shot himself on stage. The film asks sharp questions about the construction of the rock canon and offers a disarming take on the meaning of success. Fascinating, unexpected and cherishable.
Trevor Johnston – Time Out - July 2012

What you thought about Searching for Sugarman

Rarely does a documentary elicit such warm responses. Some words just kept repeating on your evaluation slips: “Fascinating, surprising, riveting, heart-warming, moving, amazing, intriguing, beautiful”. However the film was clearly something of a surprise for the majority of the audience: ‘An unusual film that was much better than I was expecting’; ‘A fairly dreary biopic changed into an inspirational and uplifting story’; ‘Bit by bit it is put together beautifully’; ‘An intriguing story told in an unemotional, matter of fact, way’; ‘Glad I didn’t read the notes beforehand – it was a great surprise to find that he is still alive’; (Not so for one member: ‘I really wish I had not read the ’spoiler’ film notes before hand!’) … and it went on from there: ‘Thoroughly enjoyable’; ‘A perfect blend of music and a remarkable story’; ‘Wonderfully photographed as well as excellent music’; ‘Well constructed, feel good documentary’; ‘Superb music – a great film’ Many of you found Sixto Riodriguez an engaging and empathetic personality: ‘A modest, talented and very likeable man’; ‘A remarkable man’; ‘An amazing character whose personality comes through in his music’; ‘What a man – and so humble’; ‘What a waste of talent’. The geographic component did not go unnoticed: ‘Very evocative of the SA that I lived in for two years’; ‘Lovely film with engaging portraits of Detroit and South Africa’; ‘ The atmosphere conveyed of Detroit and Cape Town was superb’ However, there were some reservations: ‘Curious, a nice vignette and a bit of a parable on the uncertainties and vicissitudes of life – although occasionally degenerating into bathetic homespun philosophy’; ‘I found the film slow in places’; ‘Didn’t like some of the ‘out-of-focus’ film and ‘juddery’ filming’; ‘Too long for me!’; ‘Not a fan of the music – prefer Dylan’ … and some outright condemnations: ‘I found the film utterly boring’; ‘The dialogue was so boring and incomprehensible’; ‘Irritatingly bitty – would like to have heard the songs fully’; ‘Terrible film start to finish’; ‘This isn’t a film – it’s a documentary!!’; ‘Monotonous music’ Final comments: ‘The best film of the whole series’; ‘Loved it’; ‘Fantastic – I came away feeling so good!’ ‘I have never heard of him’ – which is the whole point of the film perhaps.