The Wind that Shakes the Barley

An impassioned, politically charged story of Ireland’s fight for independence. Two brothers find themselves on different sides of the civil war in Loach’s controversial and award-winning film. 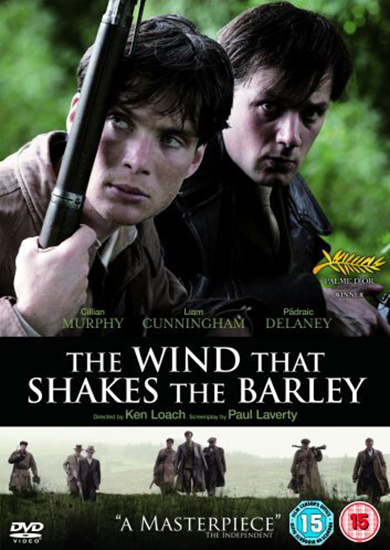 The Wind that Shakes the Barley is possibly veteran director Ken Loach's masterpiece. From its establishing shots of a drizzle-shrouded hurling match (bringing to mind the football sequence in the film that made Loach's name, 1969's Kes) the film is utterly compelling. As befits an event as complex and realistic as revolution, it's a solemn and serious film, but it also engages brilliantly on a human level. Through Damian, brought to life by a thoroughly convincing Cillian Murphy, screen writer Paul Laverty provides us with a guide through the major events in that early Republican struggle in 1920's Ireland. Peace-loving Damian is reluctant to take up arms at first. But, as is so often the way, once converted he becomes an unbending zealot - able to grimly justify not merely the shooting of a British soldier, but unarmed English landlords and the 'traitors' he has known since childhood.
Channel 4 Film Review - 2006
Ken Loach... has crafted an epic, tragic, romantic yet hard-headed thriller about the costs of guerrilla warfare. Set in Ireland in the 1920's, The Wind that Shakes the Barley, stars Cillian Murphy, as Damien, a young medic, whose soccer team-mate is murdered by thuggish British soldiers, in the course of a search for weapons. Radicalised by the atrocity Damien and his brother Teddy (Padraic Delaney) organise an armed IRA cell and stage a series of daring and bloody actions against the occupying forces. The insurgency eventually forces the British Parliament to concede a degree of autonomy to Ireland, that stops well short of complete independence. The compromise inflames latent tensions between the brothers, the pragmatic Teddy embraces it as good enough for the time being while Damien, a zealous socialist vows to fight on for his vision of utopia... Gorgeous cinematography, expansive outdoor settings, full-blooded characterisation, intelligent dialogue... The large ensemble cast is uniformly superb.
Time Out - April 2007
I think what happened in Ireland is a classic story of a fight for independence, to establish a democratic mandate and to resist an occupying army. Yet it was also a fight for a country with a new social structure. The British army in Ireland in 1920-21 did what armies of occupation do the whole world over - adopt a racist attitude towards the people they are attacking and occupying. They destroy people's houses, engage in acts of brutality and generally oppress the people - and in Iraq that's exactly what the British army is doing. In spite of the suffering depicted, the fact still remains that the British marched out of Ireland. There is an element of hope in that.
Ken Loach, Director, in Socialist Worker - June 2006
Why does this man (Ken Loach) loathe his country so much?
Daily Mail - 2006

What you thought about The Wind that Shakes the Barley

Most of you commented on the poor quality of the dialogue - especially at the beginning of the film. Apart from the fact that a rural Irish accent is relatively soft and rapidly spoken, much of the sound was recorded with the deliberate intrusion of background noise presumably to create authenticity. The problem is inherent in the direction of the film. We could screen the film at a much higher volume (as in commercial cinemas) but this would be uncomfortable for many. Perhaps we should use the subtitle facility 'for the hard of hearing' another time. A small sample of your comments on the sound: 'Is it me or are there always problems of lip synch with DVD's?'; 'I needed subtitles'; 'Difficult to understand in places'; 'Would have been excellent if I had understood the dialogue'; 'Difficult to follow especially at the start'; 'I missed most of the dialogue'. Many of you were fulsome in your praise although clearly watching the film was not that easy: 'Wonderfully 'scripted' and technically the photographic skill leaves one breathless'; 'very powerful, totally involving, cinematography excellent'; 'great film'; 'very powerful and thought provoking'; 'beautifully acted'; 'superb visual sequences'; 'very glad to have seen it'; 'grew on me'; 'overwhelming at times'; 'Gillian Murphy was fantastic'; 'a superb film - superb direction and acting'; 'Grim, gritty but well worth watching'; 'over violent in parts, otherwise good'; 'beautiful Irish scenery'; 'very thought provoking'; 'beautiful photography and settings but a tough one to watch'; 'very powerful but left me feeling drained'; 'so stunned I can't comment'; 'harrowing - it left me feeling numb'; 'hard to watch - so emotional - important to see the situation from the other side'; 'heartbreaking! A moving and illuminating film'; 'injustice and heartache just breed injustice and heartache'. For others the historical issues were important: 'The dilemmas and contradictions were well explored but the political analysis of the civil war was faulty. The split was between Collins and De Valera not Collins and Connolly and the socialist element was not at all prominent by this time'; 'thought it was going to be a tirade against the 'Black and Tans' but was a powerful evocation of the dilemmas faced'; 'convincing portrayal of relationships testing personal boundaries of misery, politics, ideals'; 'some fresh insights into the period - particularly the different views held by the Irish and the role some played after the 'peace' treaty. Nice nuances between Nationalistic Idealism and Class warfare - but lets not forget there was a protestant working class as well who eventually came up against the IRA'; 'Fairly one sided view'. For a few the film did not come up to expectations: 'Wish I hadn't come. After such a violent beginning the end was easy and I felt nothing by then'; 'a good script but poorly directed'; 'powerful but somewhat misdirected - perhaps an accurate reflection of reality'; 'characterisation was a bit confusing'; 'was it worthy of the Palme D'Or? I'm not sure'.