The Lives of Others

Drama about the Stasi investigating the political affiliations of a playwright and his lover. With an assured script, superb performances and brooding tone it offers an insight into a society that lacks civil liberties. 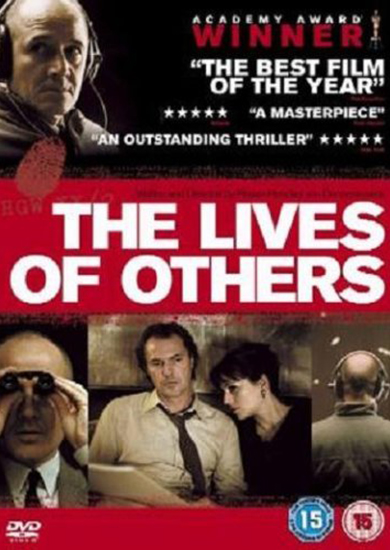 George Orwell would recognise much in The Lives of Others, a gripping and distressing vision of life under the jackboot of state repression. Set in the former East Germany in 1984, its drama takes place under the shadow of the Berlin Wall, in a country ruled by the Secret Police, the Stasi. State Security Captain Gerd Weisler (Muhe) is ordered to monitor one of the country's top playwrights, Georg Dreyman (Koch), and his actress girlfriend Christa-Maria Sieland (Godeck). As the watcher and the watched intertwine, The Lives of Others, shows in the way in which the daily realities of tyranny threatens to dehumanize everyone involved. It's a truly devastating political thriller that invites Germany to grapple with its chequered Cold War past. Adult, intelligent and unwilling to deliver glib answers to the thorny issues of personal morality that it raises, it's a film that slowburns into your consciousness...
Jamie Russell, Channel 4, Film 2007
This fierce and gloomy drama, written and directed by first timer Florian Henkel von Donnersmarck, is an indictment of the sinister brutalities of the Stasi, the GDRs secret police, whose tentacular network of informers was so vast that fully 2% of the entire civilian population was on the payroll - a network of fear and shame worthy of George Orwell's 1984. This intensively crafted liberal tragedy offers a kind of redemption: the possibility that however culpable and corrupt the East German nation became through its complicity with the Stasi, on a tiny but imperishable capacity for decency - even at highest, chilliest levels of the secret police - was what finally consigned the regime to history.
Peter Bradshaw, The Guardian, April 2007
The Lives of Others is a movie about a world where there is no justice. For us, the idea of freedom, however heartfelt, is doomed to abstraction, waved by politicians as if they were shaking a flag. To Germans, even those of Donnersmarck's generation, freedom is all too concrete, defined by its brute opposite: the grey slabs raised in Berlin to keep free souls at bay. It is a tribute to the richness of the film that one cannot say for sure who the hero is. The most prominent is Gerd Wiesler (Ulrich Muhe), yet if you passed him on the street, you wouldn't give him a second glance, or even a first. He would spot you, however, and file you away in a drawer at the back of his mind. Wiesler, based in East Berlin, is a captain in the Stasi - the state security service, which, by the mid nineteen-eighties, employed more than 90,000 personnel. In addition a modest 170,000 East Germans became unofficial employees, called upon to snoop or snitch for the honour or the survival of the state. 'Love thy neighbour as thyself', Jesus said. The GDR offered its own version: watch thy neighbour, then pick up thy phone.
Anthony Lane, The New Yorker, Feb 2007

What you thought about The Lives of Others

This film brought out many common thoughts and reactions amongst you: 'moving', 'terrifying', 'atmospheric', 'absorbing', 'chilling', 'bleak', 'very powerful', 'mesmerising', and 'sinister'. Many of you expanded on the complexity and interwoven nature of your feelings at the end of the film; 'an immensely moving, complex and inspiring film'. 'The cold claustrophobic atmosphere of the closed state was wonderfully realised.but a thread of hope ran through'; 'Beautifully put together, all the main characters real and complex, nothing overdone'; 'a mesmerising film - a gripping story told with great skill showing the extraordinary tentacles of state power and a chillingly accurate depiction of bureaucratic and political pressure'; 'a deeply moving and troubling film which raises so many "what if" questions. Had democracy not survived 1945 how would any of us have behaved?' Amidst these tense and powerful reactions a significant number of you found redemption, hope and a sense of resurgent humanity: 'exuded sadness and the horror of the situation, but on reflection offers hope as well'; 'most worthwhile although extremely demanding. It is a commentary on the hope that human nature will ultimately choose good'; 'gripping throughout, very relieved by the redeeming end. Very bittersweet.' A German guest wrote 'sehr traung aber die ender war hoffnungswoll (very sad but the ending gives hope).' There was universal praise for the acting of all the cast but particularly for Ulrich Muhe as Gerd Weiser, the captain in the Stasi: 'brilliantly acted'; 'perfectly acted and directed'; 'beautifully filmed, the main Stasi man had such an expressive face'; 'Ulrich Muhe was a revelation'; 'Weiser was outstanding'. The way the film was shot struck several observers by the way it complemented the human and political action: 'very powerful, using such muted colours, almost monochrome, heightened the bleakness of the story'; 'the bleak sepia colour evoked the atmosphere'; 'photographically it caught the bleakness of surroundings and colour - superb'. For five of you the film achieved the accolade of 'the best yet' and there was no doubt in the post performance comments as you made your way home, that this film had been a powerful, if troubling, piece of cinema.