A subtle, stylish and suspenseful psychodrama. A young pianist plans revenge on the family who thoughtlessly spoiled her chances of success. 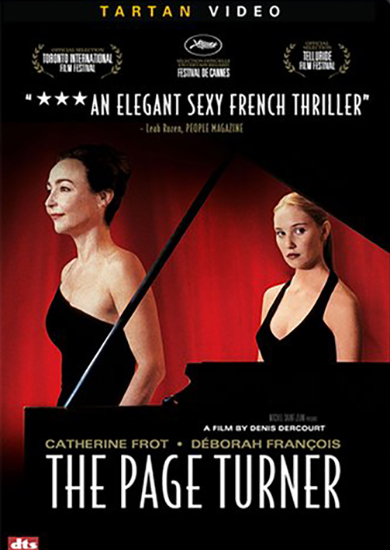 Revenge movies can come in many different forms, but rarely are they as exquisitely put together as The Page Turner, a film that shows that the last person you should ever think about crossing is an adolescent piano protégé. With barely a lick of violence, writer-director Denis Dercourt has created a deliciously sinister film in which subtle, sustained, well-planned emotional torture becomes a far more effective tool for destroying someone's life, than anything achieved wth a gun or a knife. Dercourt's classy direction... coaxes fantastic performances from Deborah Francois (Melanie) and Catherine Frot (Ariane) whose relationship crackles with underlying tension and dread.
The Scotsman - August 2006
Denis Dercourt's stylish, subtle and highly-assured film, is a pleasingly suspenseful psychological drama in the style of Hitchcock or early Chabrol. This cool, elegant and often witty film remains admirably ambiguous until the very final scenes and even then, the script wisely forgoes tying up too many loose ends. It's a meticulous piece of work, assembled with a proper understanding of music and the important role it can play in people's lives. In building narrative tension and psychological relevance, Dercourt is helped by excellent performances, particularly that of Deborah Francois (Melanie), quite superb in only her second movie.
Time Out - November 2006
Deborah Francois plays butcher's daughter Melanie, an eerily self-possessed young woman, who insinuates herself into the household of married concert pianist Ariane (Catherine Frot). The principal location in The Page Turner is the imposing country mansion, inhabited by Ariane, her lawyer husband Jean and their young son. It proves a choice setting for a sinister story of class envy and simmering emotions... quickly the servant becomes indispensable to the highly strung Ariane, who gives Melanie the crucial role of being the page-turner at her recitals... when the film-maker delivers a psychologically satisfying coup de grace, it's all the more memorable because it doesn't involve bloodshed.
BBC Movies Review - October 2006

What you thought about The Page Turner (La Tourneuse de Pages)

This film obviously caught you in its suspense and tension from the onset. For many it was 'chilling', 'a taut psychological thriller', 'gripping, full of suspense and ever present threat', 'suspenseful, simple, surprising', 'a real slow-burner which grew in atmosphere and malice', 'tension right from the beginning'. In addition there was praise for subtlety and mystery - 'the power was in the understatement', 'highly charged subtle', 'subtle yet so powerful, beautifully shot', 'compelling and subtly understated', 'hauntingly chilling', 'wonderfully modulated', 'said with so few words, yet saying so much'. For a considerable number, the subtle suspense and structured menace, were characteristically (and perhaps exclusively) French. 'No-one does this as well as the French!' 'Brutal, the French, but subtle with it', 'Very French, a real treat', 'Very French, subtle, powerful, poetic', 'Stabbing with a cello - so perfectly French', 'Can only the French produce a film like this?' There was a wide appreciation in your comments about the power of the music in the film - 'Amazing music', 'wonderful music', 'music complemented the mood perfectly', 'lovely background music', 'superb music'. Those who commented on the performances were very impressed - 'wonderful, disturbing performances', 'excellent understanding between the director and his two leading ladies'. 'Deborah Francois made it a real page turner', 'superb acting', 'great inscrutability of the lead characters'. Some of the overall comments were fascinating tributes to the power of film - 'Dangerous autographs', 'a dish served very cold indeed', 'Dismiss children's feelings at your peril', 'Beware a woman scorned. Altogether then a most pleasurable and successful first film of the season.