Jarman uses an astonishingly broad stylistic range – from Baroque painting to Gothic melodrama to camp – to explore Shakespeare’s late masterpiece about power and love. The outrageous finale is one of the most talked about scenes in film. 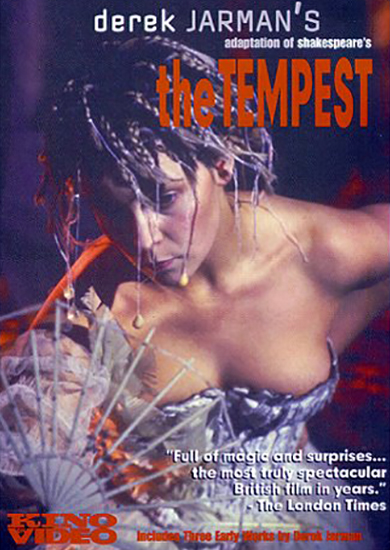 In The Tempest, Jarman uses an astonishingly broad stylistic range - from Baroque painting to Gothic melodrama to camp - to explore Shakespeare's late masterpiece about power and love. The play is a complex mixture of both sweet music and jarring discords, of romance and vengeance, of magic and stark reality... Jarman's vision of the play is radically original yet open enough to allow each viewer to concoct their own reading. Jarman is careful to retain the essence of Shakespeare, the tense interweaving of drama, magic and poetry, even as he jettisons or rearranges much of the text. As Jarman said 'the characters in the film speak, they communicate with Shakespeare's language as if it was of today, alive and vibrant'. Jarman has created not only great cinema, but great Shakespearean cinema too.
Jim Clark - The Films of Derek Jarman
Derek Jarman's third feature The Tempest is not a conventional adaptation of a Shakespeare play. There is copious nudity, unconventional casting and setting and an approach to the text that clearly regards it as a springboard, rather than a sacrament. Yet the result is one of the most imaginative of all Shakespeare films... capturing the play's sense of magic. The justly celebrated climax is both completely unexpected and strangely appropriate. Exuberantly campy, flamboyantly inventive and mercifully devoid of anything approaching good taste, this is a Tempest decidedly not for all tastes, but it shows what the cinema can bring to Shakespeare in the hands of the right artist.
Michael Brooke - BFI Screenonline
The Tempest is, if anything, punk Shakespeare. In fact Shakespeare hardly gets a look in with the play only really serving as a backdrop to Jarman's compulsively weird imagery. Jarman has wilfully rearranged and deleted sections of the play. Indeed Shakespearean purists visually give the film the thumbs down. The film is like a journey through a haunted house, where all the character and the very dwelling are verging on madness... Costumes from modern and period, different eras mix, statues stand draped in formal clothing, there are stylised porcelain Japanese masks and dancing painted dwarves. The film is filled with striking images. Forget Shakespeare but watch this haunting, compulsively offbeat film.
Richard Scheib - SF, Horror and Fantasy Film Review

What you thought about The Tempest

So, as perhaps we might have expected, for some Derek Jarman's version of the Tempest was a 'brave new world,' of film-making; for others it was ' torment to make wolves howl'. On the positive side, the film was 'truly fascinating, full of atmosphere and strangeness,' 'very convincing and gripping,' 'interesting, dreamlike, non-sequential, almost like pantomime', 'filmed in the most stunning way', 'very strange, very clever', 'completely surreal,' 'brilliantly shot'. Several positive responses mentioned good acting performances and the impact of the singing of Stormy Weather in the finale. However there was a strong alternative view: 'dark, surreal and tedious', 'bizarre, muddled, not very audible', 'ultimately boring and incomprehensible', 'izarre - beyond us', 'too slow, lost the power of the words', 'incoherent and vulgar travesty of a great play', 'Rocky Horror Picture Show in an insane asylum', 'Didn't have a clue what it was all about - rubbish', 'Didn't like it much at school: didn't like it much now!' So there we are - more differences of view than with any other screening so far. No harm in that, for film societies are a good forum for engaged feeling and debate.