Set in 1930s gangland Shanghai, this is a humorous parody and a homage to the wuxia genre, displaying its exaggerations, serious situations and comic plots. 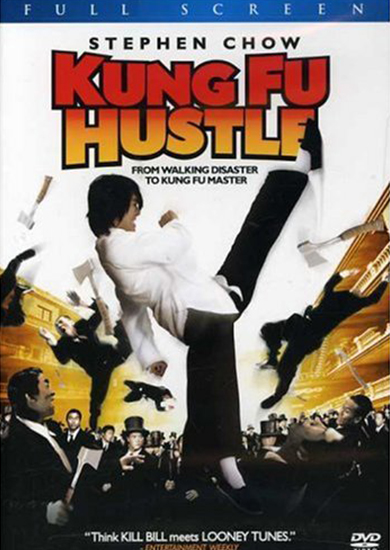 Gang war rages in the ghettos of pre-revolutionary China. On one side the dancing mobsters of the Axe Gang. On the other, the grubby but deadly Kung Fu masters of Pig Sty Alley. Caught in the middle is Sing, (Stephen Chow) a scruffy street hustler desperate to be a gangster, Kung Fu Hustle is essentially one long computer enhanced Looney Tunes punch-up and probably the most fun you'll have at the movies all year. With director Stephen Chow, martial arts mayhem meets the vicious comic brilliance of vintage cartoons. No gag is too cheeky, no special effect too extreme. Chow must share the credit with the fight choreographers, for together they have cooked up an extraordinary collection of smackdowns, culminating in a full scale tenement assault that makes a mockery of The Matrix and Gangs of New York. It's not subtle, and it's not clever, but it is fabulous.
Paul Arendt - BBC4 Film Review 2005
Hong Kong writer/director/star, Stephen Chow has a unique style which transforms ordinary situations into Kung Fu, CGI laden, stunt fuelled comedic romps. Chow casts himself as the hapless idiotic hero - a poor weedy guy anxious to be a member of the infamous Axe Gang, who terrorise 1740''s Shanghai. A hilariously impressive martial arts battle begins. The exemplary fight scenes are choreographed by Sammo Hing and Yuen Wo-Ping (Crouching Tiger, Hidden Dragon). Featuring more cartoon than most action films, more comedy than most comedies, this is a dazzling and outrageous movie.
Radio Times Film Review - June 2005
Stephen Chow, the writer, director and star of Kung Fu Hustle, has made possibly the most hare-brained martial arts movie ever. It uses special effects in ways their creators surely never intended and turns just about every movie convention it can find to comic effect. Teamed up with the mighty Sony empire, he's directed the film of his boyhood dreams. He's reclaimed fight director Wo-Ping Yuan to direct the action and the result is a progression on increasingly spectacular battles, after which there's nothing left but incapacitated opponents, flattened buildings and craters several metres wide. The film is also Chow's tribute to his elders: the action stars of his youth, but also previous generations in general. Behind the knockabout slapstick and almost non-existent plot, there's a genuine respect, even nostalgia for the past his parents and grandparents faced to put him where he is now.
Steve Rose - The Guardian 2005

What you thought about Kung Fu Hustle

There were fewer responses than usual but the attendance was smaller, which suggests that perhaps some members had already decided that this kind of film wasn't for them. Nevertheless, there was fairly consistent laughter throughout the performance and the great majority of responses put the film in the good category. Those who enjoyed the film appreciated 'fantastic special effects, black comedy, a really good laugh', 'spectacularly gruesome comedy', 'amazing sets and special effects', 'funny, off-beat, like nothing I've ever seen before', 'fun fantasy frolic - fantastic', 'great- really tongue-in-cheek and technically brilliant'. Several members were glad to have experienced a new kind of film and found ready points of contact. 'Not the sort of film I enjoy, but I liked the light comedy touches, e.g. the Kung-Fu champ's plastic flip-flops', 'really enjoyed the fights and humour - even the gore was somehow acceptable. Nice touch to have the romance as well.' 'Couldn't get to grips with it at first, but after I lost my inhibitions - loved it', 'great, very tongue-in-cheek and self-mocking'. Two or three members were glad of the experience but wouldn't really care to repeat it. So, the film was good fun overall, and apart from two disenchanted comments ('complete rubbish', 'I fell asleep') was perceived to be interesting, entertaining and worthwhile.