A look at what goes on backstage during the last broadcast of America's most celebrated radio show, where singing cowboys Dusty and Lefty, a country music siren, and a host of others hold court. 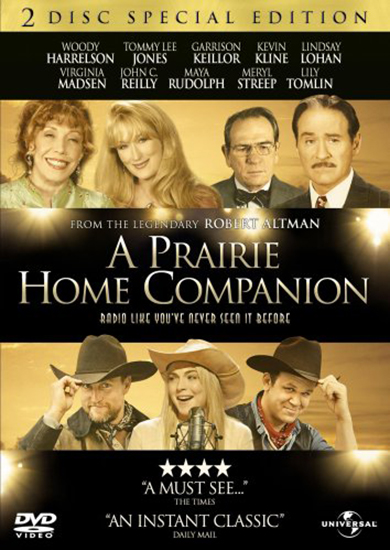 Idiosyncratic film-maker Robert Altman and writers Garrison Keillor and Ken Lazebnik have created a fictional tale based on a real-life Minnesota based radio programme that's been on the air since 1974. Set on a rainy Saturday night at the Fitzgerald Theatre in St. Paul, it's the final broadcast of the show, hosted by the laid-back philosopher Keillor, played by himself, and chock full of quirky characters. Amid the whimsical, folksy anecdotes, droll jingles for fake products and country western/gospel music, there's a charming, genial, easy-going camaraderie that masks the innate complicity of the collaborative concept, interweaving improvisational backstage stories with overlapping voices and contrasting sound plays. A Prairie Home Companion is an evocative, endearing, nostalgic, gleefully amusing glimpse of down-home America.
Picturehouse 2006
A Prairie Home Companion is a cinematic valentine to the wonderfully imaginative medium of radio. Garrison Keillor and Robert Altman are a match made in heaven. To these two Midwesterners, the region's dry whimsical humour, unfailing politeness and straight-shooting sensibility are as natural as their own skins. There is no artifice here, just a native keen intelligence that slyly hides behind homespun wit and verbal slapstick. The movie steadfastly sticks to its radio roots. The comic bits are gems of off-the-cuff humour. Keillor's droll lyrics and jingles for fictional sponsors poke good-natured fun. The toe-tapping musical performances are refreshingly captured by Edward Lachman's mobile camera.
The Hollywood Reporter 2006

What you thought about A Prairie Home Companion

This is our first screening to produce responses in all five categories! Clearly there were technical problems with the DVD. Many of you mentioned the lack of synchronisation between the singers and the 'singing' (lipsynch) - and there were other times when the sound was 'blurred', dialogue 'overlapped' and the 'asides' where inaudible. Many of us were left wondering whether this was deliberate 'Altman' or just poor work in producing the DVD. Some were quite fulsome in their praise: "Wonderfully chaotic", "Strangely entertaining", "A brilliant evocation of a passing style and era", "Wonderfully original film", "Deceptively engaging", "A pleasing mish-mash", "A really relaxing film at the end of a heavy day", "Subtle subtext of the characters shown by the background comments were quite amusing". Other comments showed more than a twinge of regret that the film did not meet the high standards that Altman has achieved in the past. "Altman's direction at times self indulgent", "... not one of his best", "... typical Altman - what you see is what you get - and no more", "Idea good but muddled", "... the storyline didn't come together well...", "Gently amusing but not memorable", "Unconvincing", "I didn't think it really worked despite the good cast", "... dark to look at and slow and laboured ... was expecting more", "I thought the angel contrived". For others it was clearly a disappointing evening. "Not a film I really enjoyed - I appreciate it was original and different", "A film made for the American market a consequence of which was the difficulty of understanding some of the dialogue", "Deeply unfunny", "Dreary as hell". Perhaps the most cutting comment of all: "The Muppet Show but with people. I knew America was weird but never could find the proof". On the plus side, however, most enjoyed the sound track: "Great music", "a foot stamping soundtrack", "Wonderful music", "Loved the music", "A great Hill Billy concert within a film - double value!", "Music good". Regarding individual performances: "Kline at his comic best, Garrison Keillor as wonderful as ever", "Meryl Streep - brave try but miscast", "The performers enjoyed it", "Garrison Keillor was terrific". A suitable epitaph for Robert Altman? Not an outstanding film perhaps but clearly a further if final demonstration of the unusual and intriguing cinema that his idiosyncratic style of direction has given us.