A moving and witty take on filial love as a young man tries to protect his mother from the political reality of the fall of the Berlin Wall. A bittersweet look at Soviet East Germany and a sharp view of its materialist replacement that has resonance today. 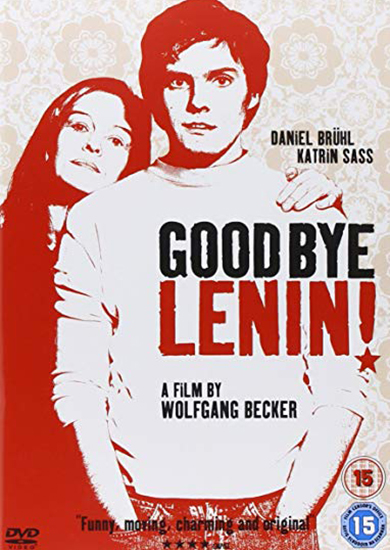 In this clever, poignant little movie from Wolfgang Becker we have the shock of the new and the shock of the old. We get a reconstruction of Berlin in the old German Democratic Republic. The lost world of Communist East Germany looks so distant that people in the street might as well be discussing the Versailles Treaty. A Rip Van Winkle parable unfolds here, showing a world that changed with extraordinary speed. It combines satire of the Communist state and its desperate and sentimental delusions and state-sponsored infantilism with a love story: the kind of love story rarely celebrated - a boy's love for his mother. The personal and political come together in the story of Christiane Kerner, devoted single mother of two children and fiercely communist East German. In the historic year of 1989, Christiane witnesses her son Alex amongst a crowd of protestors. Convulsed with mortification, she collapses into an eight month coma, during which time the GDR collapses. When Christiane wakes up her doctors tell Alex she must not be excited or upset in any way. So he decides to conceal from her the biggest news of the 20th Century and pretend nothing has happened.
Peter Bradshaw - The Guardian - July 2003
This film is interested in the dynamic of old and new, the tension between the state careering towards capitalism and the memory of stability and childhood... it is a comedy of being out of step and out of time. Goodbye Lenin is interested in how memory and fantasy can sustain through a period of trauma, be it the ideological end of the state or the death of a mother. The film gently explores nostalgia, sentiment and family. It is a nuanced piece, that doesn't really push its ideas to the limit, but enables some good free work from the actors and experts, something from the audience. The jokes are good, the script tight and the direction unfussy - all in all a solid piece that shows some development, but not so much a leap forward for Becker (director) as a widening of perspective.
Jerome de Groot - Film Monthly - August 2003
It's 1989 and the citizens of Communist East Germany have just been dragged kicking and screaming (for joy) into the present, as brick by brick and chunk by chunk, the wall dividing them from the capitalist paradise of West Germany is demolished. For Christiane Kerner, though, nothing has changed. This single mother and fully-fledged supporter of the Communist Party doesn't even realise the Cold War is over, since she fell into a coma just before the wall came down. So, as Burger Kings replace ration queues and Coca=Cola adverts knock Lenin off his perch, Alex has to keep his bed-ridden mother completely in the dark, with the help of his sister and his best friend. Wolfgang Becker's film about one man's attempt to make history stand still, is a tragic-comic journey into political upheaval and personal worries. Becker turns the family's crisis into a symbol of Germany's own attempt to heal its wounds and rebuild itself.
Mark Stevens - BBC Four Film - July 2003

What you thought about Goodbye Lenin

A very high proportion of those who responded (80%) put the film in the excellent category. Not surprisingly there were common strands in the factors which distinguished its quality. First of all was the often ironic and touching humour 'clever humour', 'humour with pathos', 'full of humour', 'the subtle humour of lost illusions', 'wonderful comedy of 'fake' news programmes', 'perfect comic pace and timing', 'brilliantly conceived comic versions of truth', 'strong visual satire throughout'. Also strongly praised was the original and compelling version of history and large scale political events: 'a wonderful twist on history', 'ingenious and interesting treatment of events', 'a real insight into the reunification of Germany', 'a bittersweet commentary on the other side of a known political event', 'an absorbing view of history seen through one family's personal and emotional involvement'. The emotional range of the film was another feature of its strength - the complexity of vision defying easy categorisation: 'fabulous observation, humour, pathos, love, politics, loyalty - great film!', 'light-hearted historical journey in fast motion, never losing sadness and poignancy', 'interesting story both emotionally and historically - touched with pathos and humour', 'a very good balance of comedy and drama with a mixture of emotions', 'a very clever mix of emotions, humour, lessons and warnings'. Many responses also praised the film's pace, the quality of the acting, the creativity and subtlety of the photography and the all-embracing cleverness of the conception. Not everyone went along with these judgements however: for a few it was a 'bit slow and laboured', 'interesting but a bit too long', 'Interesting but dragged on a bit too long', 'a bit slow at times'.