A powerfully directed excursion into Aboriginal mythmaking and storytelling. Shot in monochrome interspersed with colour, this engaging and witty film offers us a vision of a landscape and culture outside the paradigms of the twentieth century. 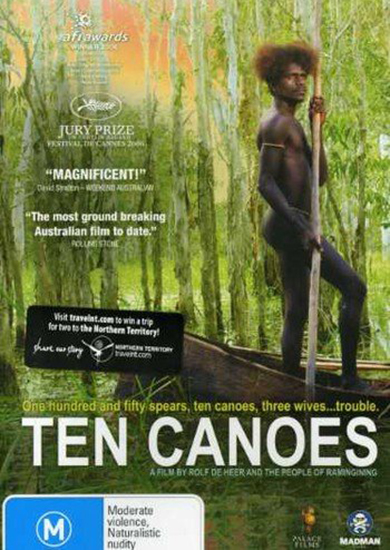 Rolf de Heer's Ten Canoes is a richly layered folk-myth drama set among Australian Aboriginal tribes in the Northern Territory: a tale of war and love and death among unclothed hunter-gatherers.

There is beautiful photography and some terrifically insouciant performances from first-time actors. ...The very notion of a story line is perhaps inapplicable to a world view when the distinction between past and present is blurred, in which thousands of years pass and the nature of people's lives remain precisely the same.

De Heer begins with a simple, beautiful image; a winding river in lush country, with a wry playful voiceover from actor David Gulpilil, who explains that the story he has to tell, so far from being simplistic, is a complex and sophisticated affair.

A young hunter is discontented with his unmarried status and nurses a desire for one of his brother's wives. In order to instil wisdom and patience into the young buck, his elder tells him some overlapping, inter-relating stories of his ancestors, which take place before us, in colour.

...Ten Canoes makes an ambitious leap of sympathy into the world of Aborigine people, on their own terms. The actors have an unforced authority and ease. The movie presents vivid personalities in various permutations and lets their natural charm do the rest.
Peter Bradshaw - The Guardian - June 2007

Different modes of storytelling and its various effects, are at the heart of this rich, wise and quite unique collaboration between filmmaker Rolf de Heer and the Aboriginal community of Ramingining, in Australia's Northern Territory. ...Ten Canoes is a wry fable about jealousy and desire, a fascinating ethnographic document and a highly enjoyable nudge-in-the-ribs shaggy dog story.

Village elder, Minygululu, embarks on an ancient cautionary tale, that unfolds in colours over the course of the expedition. This story tells of the life of a proud warrior who also has three wives and an envious younger brother, whose life is thrown into turmoil when one wife disappears. The fun which the voiceover pokes at both the characters on the screen and us, the viewers, is emblematic of the playful engagement with the nature of storytelling that runs through the action and execution of Ten Canoes.
Ben Walters - Time Out - June 2007

What you thought about Ten Canoes

Ten Canoes pleased the audience with its 'timeless feel', 'the absorbing story', 'the combination of humanity and humour', 'the simplicity of the story', 'the gentleness of pace and narrative', and the sense of 'stepping back in time', or 'timelessness' in human affairs and emotions. Nearly all the responses admired the 'sense of place', 'the wonderful photography', 'beautiful cinematography', 'stunning photography', 'excellent camera work'. Several responses commended the skill and expertise of the non-professional cast and their instinctive sense of the craft of communicating. There was no doubting the overall audience interest, part ethnographic, part anthropological, but for a significant number the film lacked dramatic pace. It was 'interesting, but slow', 'slow-burn - fine for a short, but not for 90 minutes', 'the story line was too slow - impact was lost', 'overall, a bit slow', 'a bit pointless', 'a bit too slow, confusing at first'. One viewer, highly impressed, couldn't give the film a rating but was drawn and held by the 'strange circular story - A Thousand and One Nights, as told by Harold Pinter'. So, in summary Ten Canoes was perceived as a gentle, interesting and unusual film relating an absorbing, timeless cycle of events, taking place in a beautiful setting.