Me and You and Everyone we Know

A quirky look at relationships in the digital age that offers an unsettling, often hilarious, view of life in modern America. Told through the eyes of a struggling artist and one-woman taxi service, it considers the search for love and community. 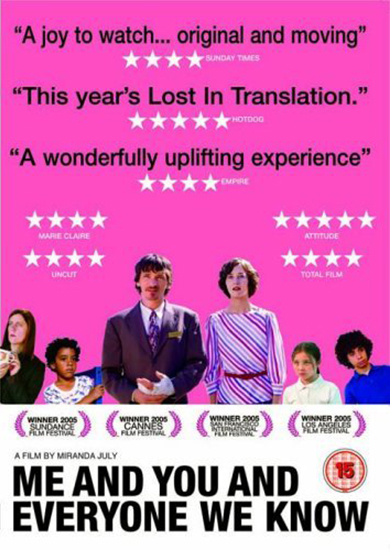 We are all alone. We e-mail our cubicle mates instead of talking. We screen calls. We watch reality TV. We wear headphones and ride the train without looking anyone in the eye. And no-one looks at us. And yet, argues the movie, we're all connected. This paradox of contemporary urban living is the jumping off point for Me and You and Everyone we Know, which explores how though technology and anxiety threaten to isolate us, we're all struggling to connect. Picking up what has become the fashionable approach to downtown drama, the film spins intersecting storylines, weaving together a city's lonely and lost souls to reveal, for good or bad, where they (we) all meet. The melancholy Me and You and Everyone we Know is the very personal, very funny vision of performance artist Miranda July, who stars as Christine, a Los Angeles artist, who moonlights as a driver for the elderly running retirees on errands in her Elder Cab. Christine meets Richard (John Hawkes), a department store shoe salesman, who talks her into a pair of cushioned, pink, ballet flats. Richard is a soon-to-be divorced father of two sons, prepared for "amazing things to happen". As Richard and Christine slowly tiptoe towards each other, we meet a collage of young characters; Richard's sons, seven-year old Robbie and fourteen-year old Peter and two flirty neighbourhood girls. Miranda July says her film was inspired by "the longing I carried round as a child for magic to descend upon my life and transform everything".
Chicago Herald Tribune - 2005
Miranda July's low budget independent film Me and You and Everyone We Know takes place over a few weeks in a nondescript California suburb where a variety of people live lives of quiet desperation, reaching out to each other for love, consolation, or some form of community. The adult characters are, for the most part, yearning and ineffective; the adolescents have an assertive quality, an authority of cheek. Miranda July has placed herself at the centre of her own movie as a participant in the community's seemingly innocent eccentricity, rather than as a superior observer of it. No-one seems in control of their lives and there is a constant disturbing undertow of transgressive sexuality, handled without judgment and with a lack of prurience. Embarrassment is everywhere but there are also touching moments, all the better for being surprising and unforced. This is the kind of picture that divides audiences. On one hand it's charming, truthful and full of the sadness of everyday life. On the other, it's whimsical, overly indulgent towards the colourfully odd and sadly ineffectual.
The Observer - 2005

What you thought about Me and You and Everyone we Know

A number of you commented that we still have lip sync problems and the sound quality could be better. Apparently, this is a recognised problem when modern DVD players and video technologies are used in conjunction with speakers 'at a distance'. That is our situation! There are some settings to explore. One way or the other we will keep trying until we get it right! As for the film, a very mixed collection of reactions! At one extreme a significant number of you: 'Found it saccharine, sentimental and pretentious'; 'the most appalling feminist rubbish'; 'expected to be quietly amused - but wasn't'; 'depressing and un-funny'; 'self indulgent, incoherent, unconvincing, perverse - ultimately tedious'; 'not my cup of tea'; 'didn't work'; 'baffled, lost for words, too many undercurrents'. ... and at the other: 'Just my kind of cinema - weird, strange and thoughtful'; 'great film, really enjoy a film like this'; 'delightfully quirky'; 'best film so far - great camera work'; 'a truly original piece of film making, whimsical, sad, weird'; 'really pleased to have seen it'; 'completely original'; 'my favourite film to date'; 'very enjoyable'; 'weird, weird and weirder still - but with laughter to save it'; 'welcome change from the Holywood routine'. For many the film had more serious connotations: 'A comment on a frighteningly fractured society'; 'deep down we are all just normal human beings in this unlikely world we have created'; 'the children, especially the youngest, afforded some hope for the future of the community'; 'the inability of the adults to communicate reflects some aspects of life'; 'a film about a very alien society where people have lost the ability to speak to each other'; 'enjoyable glimpse into the edges of suburban life in downtown America'; 'thought provoking'; 'made the sinister appear innocent, no baddies, strangely uplifting'; 'at times surprisingly poetic, at times a bit boring'; 'scary not knowing what children do on the internet'; 'some amusing moments and perceptive comments on alienation in the modern world but not enough to make it all hang together'; 'situations with children rather disturbing'. ... And more: 'The power and the passion of the film highlight the confusion of modern life'; 'unsatisfactory - like life - was that the point? Low key ending but more positive than last week'; 'a bit too fey but excellent characterisation - overall rather melancholic and unsettling, quite sad'; 'sympathetic characters'. Some more descriptors: 'Light hearted', 'clever', 'funny', 'amusing', 'charming', 'quirky', 'delightful', 'delicious', 'wacky', 'touching', 'lonely', 'very imaginative', 'bizarre', and 'strangely compelling'. Final comments: 'Rather depressing indictment of a dislocated society'; 'very American - glad I live in England'; 'good camera work, interesting photography - and we almost saw all the credits at the end!' 'Rather slow but well acted - particularly the children'; 'children were brilliant'; 'kids were fantastic'; 'Hard to sum up because so much is left open - like a hope chest!'