Marilyn Monroe plays it straight in this wild, gender-bending comedy about two idiotic jazz musicians on the run from the mob. Digitally re-mastered, Some Like it Hot remains one of the great satires of all time. 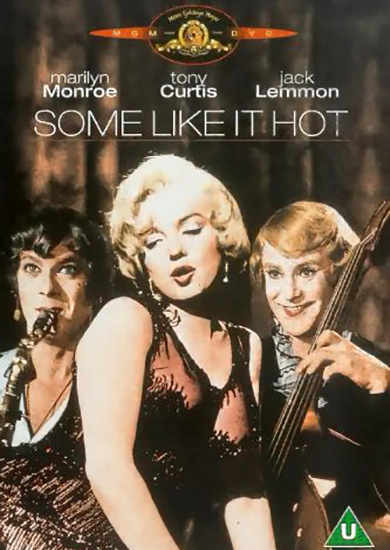 It's almost impossible to think back to 1959 and realise that in mixing an affectionate view of transvestism with a light-hearted look at the mob, Billy Wilder was being daring in the extreme. For those who haven't seen it, Some Like it Hot is one of the greatest comedies ever.

In a story of increasingly wild absurdity, it follows the antics of the two idiot musicians (Tony Curtis and Jack Lemmon) who after witnessing the St. Valentine's Day Massacre, struggle to escape the gangsters by dressing up in a dress and joining an all girl band. Comic complications aplenty ensue when Tony Curtis - now a pouting girlie - strives to express his lust for Marilyn, while Jack Lemmon - equally high-voiced and simpering, is being pursued by an amorous Joe.E. Brown, who has one of the funniest, and most radical final punch-lines in screen comedy.

Some Like it Hot is one of those rare movies where all the elements gel all of the time. Wilder presents all three (Tony Curtis, Jack Lemmon, Marilyn Monroe) with great comic scenes which, on the back of originality and great timing embrace both slapstick and super-sharp wit.
Michael Thomson - BBC Film Review - Oct 2000

This daring, witty and original classic was greeted with general acclaim and a warm round of applause. You found it 'great fun', 'great laughs', 'a masterpiece of timing', 'an American film in the best tradition', 'witty and entertaining', 'a lovely old-timer', 'a laugh a minute', 'often imitated, never even equalled'. There were tributes to all the actors - Tony Curtis, Jack Lemmon and Marilyn Monroe - with Marilyn Monroe's performance singled out for its sparkle and vivacity. 'Marilyn Monroe at her very best'. Many of you appreciated the film's final punchline and it was clear that the film's spirit and verve were a very fitting way to conclude the Society's first season.