The Double Life of Veronique

The story of two young women who are in some mysterious way the same woman leading two different yet interconnected lives. Its fragile, opiated atmosphere hovers between eroticism and melancholy and completely captures the audience. 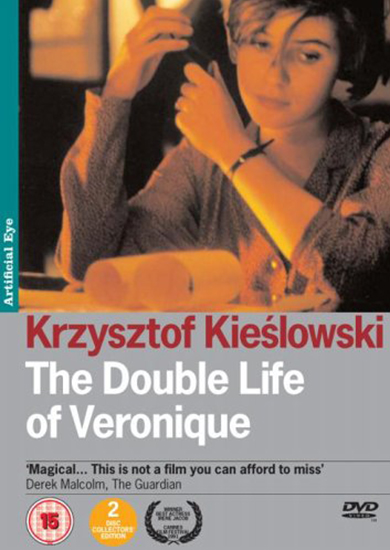 The sheer, heart-stopping beauty of Irène Jacob is what shines out, firstly, from this welcome revival of Krzysztof Kieslowski's great movie from 1991. Maybe because she has not had the international career of her Kieslowski contemporary Juliette Binoche, her face is not as familiar - so the reappearance of this fine performance has an added force and freshness. I can only say that the opening image of Jacob, as the young Polish singer Weronika, transfigured by music and literally singing in the rain, is quite captivating.

The Double Life is the enigmatic story of doppelgängers: Weronika and Véronique are two young women in Poland and France, both singers, the same age and physically the same in every respect, unaware of each other's existence, yet unconsciously sensing a spectral companion. And both of course are played by Jacob, though Weronika's Polish dialogue is dubbed. Weronika, who has a weak heart, dies onstage in mid-song and hundreds of miles away Véronique, without knowing why, senses that she too has a cardiological flaw and that there is danger in pursuing a demanding singing career. She abandons it - to the horror of her teacher - and her artistic and spiritual life is displaced into a difficult love affair.

The trope of double-identity becomes a brilliant meditation on choices and alternative lives, on the presence of death which forces these choices on us, and on the terrible demands which art can make - if we choose to let it. Véronique's identity, her very existence, become vivid and deeply felt because the fable or mirage of its duality has allowed it to be questioned and examined. Kieslowski suggests that the appearance of an uncanny double would be the occasion not of shock or horror, but ineffable sadness, a proof that we are not unique and not immortal.

But the elusiveness of the film is precisely the point: it is as beautiful and mysterious as a poem and its formal elegance and conviction are unarguable. What makes it a must-see, however, is the generous, unselfconscious passion of Jacob's performance as a young woman - two young women - in love.

What you thought about The Double Life of Veronique

There were contrasting reactions to the puzzles and ambiguities of this complex film. Many of you relished the 'luminous mysteriousness' and found the film 'enigmatic and compelling throughout', 'thought-provoking', 'full of beauty and sadness', 'intriguing', 'captivating and beautifully made'. In some responses, the uncertainties were part of the appeal; 'it seemed fragmented at times, but clearly wasn't', 'I enjoyed the beautiful girl and the air of mystery', 'strange story, but kept me interested', 'the number of possible interpretations is infinite', 'strangely compelling but I'm not quite sure why'. But these strengths and qualities were not perceived by everyone: 'beautiful, but overlong', 'atmospheric but lacking a certain je ne sais quoi', 'too long, spooky and bizarre', 'incomprehensibly mystifying', '...a flawed film. The exploration of identity became self-indulgent', and the most scathingly 'interesting idea turned into a metaphysical dirge. Who cares?' However, Irene Jacob's performance was praised in most responses and the quality of the music was seen as major feature of the film in more than half of the views expressed.

Writer and Director: Nick Fletcher The audience clearly enjoyed this short by Nick Fletcher, a Godalming filmmaker, and the applause which greeted it was reflected in a number of very positive comments made in your responses.