Volver (in English, Coming Home or Coming Back)

Screened before the GFS came into existence as a trial to gauge the level of interest in Godalming, this film was a great success and launched the Godalming Film Society. 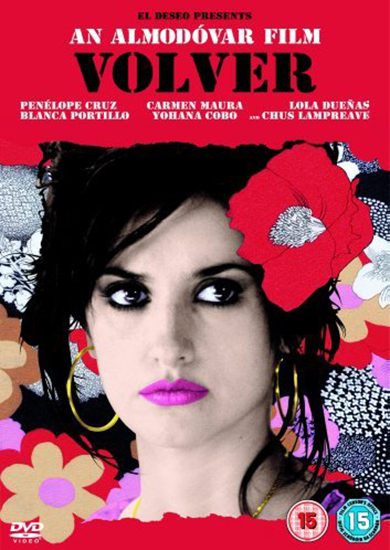 In the last 10 years, Pedro Almodovar has become, among much else, the greatest director of women since George Cukor. Like Cukor, he revels in their resourcefulness, their generosity, their long-suffering patience and, perhaps above all, their protective talent for masquerade. All of these elements are celebrated, in his eccentric and characteristically perverse way, throughout his latest project, Volver, a comedy melodrama that juggles with moods so freely you that you can hardly tell if it's up or down, funny or sad. Indeed, if there's a better byword for tragicomic than "Almodovarean" I don't know it. How else to describe the film's opening scene, which is set in a village cemetery in La Mancha, where women of all ages lovingly polish the marble gravestones of their dearly departed, while a fierce wind swirls all about them? Here, Raimunda (Penelope Cruz) and her adolescent daughter Paula (Yohana Cobo) meet their old friend Agustina (Blanca Portillo) and chat quite merrily about the dead, then plant lip-smacking kisses upon one another in farewell. The chiaroscuro of funeral black alongside pale faces has the delicacy of that Velazquez picture of the old woman with her eggs. Would anyone now doubt that the director is a great painter-dramatist at work?
Anthony Quinn, The Independent, 25 August 2006 (Extract)
In one of the most gorgeous images in 'Volver', white blossoms into crimson as a sheet of kitchen towel saturates with blood. Housework here is murder and a woman's work is never done - not after killing, not even after dying. The story is at once hysterical and mundane, founded in abuse, rape, murder and corpse disposal yet ultimately about none of these so much as the endurance of those involved. Raimunda is a working wife and mum holding down several jobs to support her adolescent daughter Paula (Yohana Cobo). She also makes regular trips back to her home village with her sister Sole (Lola Dueñas) to tend their mother's grave and visit their aged aunt (regular Almodóvar biddie Chus Lampreave). But when Raimunda's husband suddenly dies and Sole starts receiving visitations from their mum (Maura), both have to learn to live with death and the practical as well as emotional challenges it brings. It's some achievement that the film is both funnier and more moving on repeated viewing, when its pervasive dramatic ironies emerge. Where the director's earliest works alternated tragedy and farce, 'Volver' masterfully interpolates them: the absurd and the affecting rub along with marvellous, deceptive ease, recalling 'The Trouble with Harry' one minute, 'Babette's Feast' the next. Vintage Magnani and Loren, meanwhile, are explicitly evoked in Cruz's bravura performance. The construction of glamour (another perennial Almodóvar trope) lies at the root of the original sins blighting this family - sins played out in the mad desert garden of their home village. More even than 'All About My Mother', this is a world of absentee men and multi-tasking women unfettered by conventional expectations - including those of the genre narrative 'Volver' initially seems to offer. Time and again the expected development is described rather than shown, or finessed away entirely. The result is to bind us more closely to the characters than the plot in a testament to Almodóvar's ideal - perhaps idealised - vision of female solidarity. If that kitchen towel shot turned housework into a fight for life, the gorgeous closing credit sequence makes the mundane miraculous, as patterns from the characters' everyday clothes bloom into screen-filling beauty.
Ben Walters, Time Out London Issue 1879 (Extract)
Volver is a gripping melodrama inspired by the trash TV that is a soundtrack to its characters' lives. Penélope Cruz is Raimunda, a hard-working woman with a teenage daughter, Paula (Yohana Cobo), and a feckless, layabout husband. With her sister Sole (Lola Dueñas) she tends to the graves of her parents, and visits her ailing Aunt Paula (Chus Lampreave) who is heartrendingly in the final stages of dementia. Raimunda's family life shatters with one terrible act of violence, and there is a secret about her late mother Irene (Carmen Maura) that surfaces when Irene returns from beyond the grave to make contact with her astonished daughters. Her real relationship is with her daughter, her sister, her mother and with her garrulous women-friends and neighbours - all chattering, laughing and, at a funeral, mumbling prayers like a swarm of pious, black-clad bees. But of course, Cruz is intensely engaged with one man: Almodóvar himself, who manages to draw out her presence like a ductile material and spread it all over his movie. Only Cruz could have carried off those hoop earrings, as big as soup-plates, and on anyone else her black top with the flowery design might have looked as if it came from Primark. On her it looks sensational, and its floral motif is carried over into the final credit sequence. No other director has as much swoon factor as Pedro Almodóvar: the texture of his movie-making is quite unique. Volver could have gone on for another hour or two: there seemed so much more to say. What a triumph for this great European director who just seems to get better and better.
Peter Bradshaw, Guardian, Friday August 25, 2006 (Extract)

What you thought about Volver (in English, Coming Home or Coming Back)

Those who responded were consistently and substantially impressed by the emotional and imaginative power of the film. It was variously described as 'enjoyable', 'very fine', 'fantastic', 'a revelation', 'thought-provoking', 'ravishing', and 'very moving'. Many comments directed praise to the quality of the acting performances, particularly Penelope Cruz:- 'beautifully pitched', 'marvellous acting', 'Penelope Cruz was not alone in acting well', 'a charming blend of the homely and the profound'. Nor did the film's narrative, visual and aesthetic qualities go unappreciated - 'great photography', 'a wonderful eye for details', 'full of tangible life and colour', 'the very stuff of Southern Europe', 'full of twists and turns'. For many in the audience there was, in the film, a reflection of significant and personal experience - 'a film about loneliness and the depths of love between women and their families', 'I feel a stronger woman after seeing this film', 'Who needs men!?' The only negative comments on this otherwise auspicious and very encouraging occasion, were to do with the difficulties in reading the sub-titles from the front rows of the auditorium and the lack of air-conditioning in the Borough Hall.