A local British ruler threatens to double the tax on hard-pressed villagers in late 19th century India, then challenges them to a cricket match. Set in spectacular landscapes and with powerful performances, exhibits both pathos and humour. This is a very long film and will be shown with an interval. 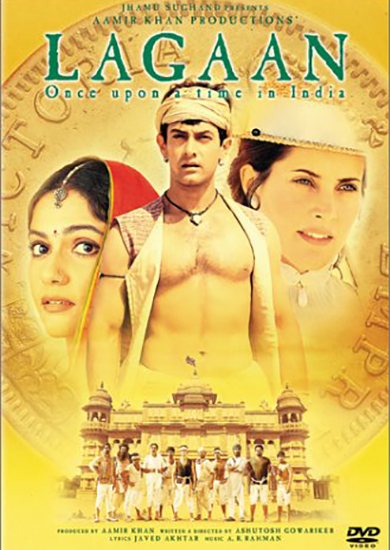 By mixing two of India' greatest loves - cinema and cricket - Aamir Khan's debut production has become the first Indian classic of the 21st Century. Set in a small village in British ruled India Lagaan tells the story of a group of farmers, men with simple dreams, who are waiting for the elusive paths. With their crops withering away in the blazing sun, the farmers hear news of their British master, lead by the arrogant Captain Russell, who have demanded double tax known as 'lagaan'. The group visit the British cantonment, only to be challenged by Russell to a game of cricket. If they win, they are exempt from the tax. If they lose, it will mean triple tax. The song and dance sequences are animated and evocative and fit in with a serious narrative with seamless energy Lagaan concludes with the most tense and exciting game of cricket ever seen on screen. With some laugh-out-loud comedy and tear-jerking emotion Lagaan, will be the film all others in Bollywood judged against, in terms of both creativity and success.
Channel 4 Film Review - 2001
The year in 1893 the farmers of a small village in central India have been waiting for the monsoon rains, to no avail. On top of their woes, the local British ruler, Captain Russell, has demanded double tax - lagaan. The angry villagers confront their masters, only to be faced with the arrogant Russell, who issues them with a challenge: a game of cricket. The unlikely heroes are led by the enigmatic farmer Bhuvan (Aamir Khan), who inspires them to learn the game - culminating in the most lively and intense cricket match ever witnessed on the screen. Director Ashutosh Gowariker, captures the beauty and simplicity of rural life in India at the turn of the century. Lagaan is anything but standard Bollywood fodder, and is the first must-see of the Indian summer - a movie that will have you laughing and crying but leaving with a smile.
Kulinder Singh - BBC Film Four Review - June 2001

What you thought about Lagaan

There was a small but delighted audience for 'Lagaan' signified by the round of applause at the end of a screening lasting nearly 3.5 hours! There were manifold pleasures: 'absolutely brilliant', 'a feast for the eyes', 'fantastic music and dance', 'a wonderful heart-warming story', 'charming, captivating and what an ending', 'wonderful music and superb dancing and the drums!', 'funny and great character development', 'amusing, exciting and altogether good fun', 'opera and cricket rolled into one', 'highly entertaining', 'wonderful, moving, loved the singing and dancing', 'utterly compelling, beautiful cinematography', 'engrossing and all encompassing - a tone epic'. There was great involvement in the cricket match even from those not usually enthusiastic for the game: 'was ever a game of cricket so exciting', 'if all cricket matches were like that I might actually go and watch one', 'great cricket match', 'the cricket match was fantastic', 'a thrilling final 45 minutes', 'what an ending!', 'best cricket match I have ever watched', 'enjoyed seeing the Brits lose - never said that before!'. For one or two of you the film was a bit one sided and the portrayal of the British rather wooden. There were some interesting connections made 'The Good the Bad and the Ugly meets West Side Story' and 'Victorian melodrama and a musical plus cricket' in what was clearly a very pleasurable evening.