Set in Austalia’s outback, Jindabyne is a powerful drama about how people live together, male attitudes to women, and the rituals that make up society. A challenging film whose impact lingers after viewing. 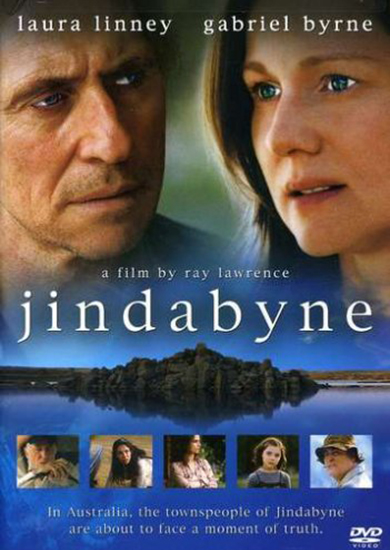 Gabriel Byrne deserves some serious silverware for his performance in this outstanding Australian film from director Ray Lawrence (who made Lantana) and screenwriter Beatrix Christian. The movie is beautifully shot, and succeeds in being deeply disturbing and mysterious, with richly achieved nuances of characterisation. It is based on Raymond Carver's short story So Much Water So Close to Home - also in fact alluded to in Robert Altman's Short Cuts - but here the action is transposed to the vast landscape of New South Wales. Here Byrne plays Stewart, a former racing driver, now reduced to running a shabby old garage, brooding on former glories and dyeing his hair. He basically lives for one weekend a year: a male-bonding fishing trip with three buddies, away from the querulous and demanding womenfolk, in a rugged wilderness where they can forget the petty quarrels and disappointments of their lives and brusquely reclaim their manhood. At the beginning of their precious weekend, they find the corpse of young Aboriginal woman in the river - the victim of a serial killer. Rather than spoil the trip, they decide to leave the dead woman where she is, heartlessly tethering her by twine to the riverbank, and delay reporting the body until Sunday night. When she discovers what went on, Stewart's wife Claire (Laura Linney) is horrified. The man she thought she knew is capable of an act of insensitivity amounting to a kind of bourgeois barbarism. Jindabyne addresses a gulf between articulate women and moody silent males, between the whites and the patronised Aborigines, and between scared humanity and the vast and frightening landscape of Australia itself. This is the kind of film to see and then talk about endlessly over dinner afterwards. It's real cinematic nourishment.
Peter Bradshaw, Friday May 25, 2007, The Guardian (Extract)
She's dead. They can't help her. Best to leave her in the water where at least she'll be preserved. Such is the argument when four Aussie mates encounter a corpse floating in a remote pool and decide to hold off reporting their discovery until after their annual fishing weekend in a rugged corner of New South Wales. Garage owner Stewart (Gabriel Byrne) doesn't even mention it to his wife (Laura Linney) on his return, and when the news does leak out it doesn't just exacerbate tensions in their already rocky marriage, it exposes the cultural abyss between the white fishermen and the appalled family of the Aboriginal victim. For the indigenous communities, the spirit lives on after the body, so this is an upsetting act of disrespect, and the perpetrators seem uncomprehendingly insensitive. Lawrence uses the shock of mortality to send dramatic ripples off in all directions, though here the scope's even wider than that film's engrossing survey of the battle of the sexes, taking in an array of lives stymied by both personal and colonial histories, suggesting that the scars of racism are far from healed. Thankfully, there's little preachiness in these waves of complexity, since the film is grounded in the emotional immediacy of Byrne's befuddled masculinity and the reliably brilliant Linney's counter-productive rage at small-town narrow-mindedness.
Trevor Johnston, Time Out London May 23rd-29th 2007 (Extract)
Jindabyne turns out to be a film that works on several different levels. Ray Lawrence has simplified his filmmaking technique to a radical degree, shooting very fast with as little equipment as possible and using only natural light. But the end result is anything but simple because all the characters in the story emerge as real people. Jindabyne is a specifically Australian story about men and women who've lived a few years and wrestled with life a lot. And it's essentially optimistic because it's about the way we find meaning in our lives. It's a bit of a miracle, really - do yourself a favour and see it.
Peter Thompson, Sunday On-line (Australia) July 16, 2006 (Extract)

What you thought about Jindabyne

For many of you in the audience this was a film of very high quality - 'moving', 'thought-provoking', 'completely involving', 'full of tension', 'gripping', 'atmospheric', 'compelling', 'haunting', 'every frame humming with a sense of danger'. More than 25% of responses praised the atmosphere created by 'beautiful photography', 'beautiful filming' and the striking scenery and landscapes. The film was packed with emotional and social issues for many you, communicated directly through excellent acting and performances. You found 'the sexism of down-under perfectly caught', 'the tension of relationships that don't satisfy, yet hold', 'full of characters locked in their personalities', 'a wonderful study of guilt', 'so many issues-race, sexism, mental-health, homophobia'. For two of you the involvement in character and action was such that you hoped that the wasp sting was terminal! There were one or two dissenting voices who thought the pace was slow, some of the character's responses to situations lacked conviction, and the film itself a little over-long. The issue of the quality of sound on the DVD is still with us - seven responses referred to this, three criticising poor sound and clarity and four finding the sound improved or better. This was clearly a successful film and much enjoyed, and for two members, the best film of the season so far.