Winner of the best animated feature Oscar in 2003, this epic and imaginative film offers more magic and innovation than most animators could manage in over two decades. Guaranteed to delight. 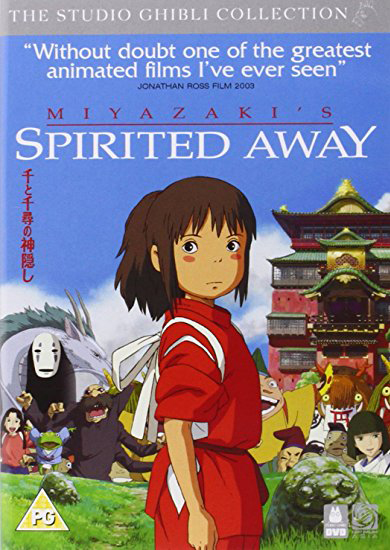 This Oscar-winning animated feature is one of the most impressive animated features of this or any other year. With none of the sentimentality of Disney, this epic story is more imaginative and rousing than anything American animation has produced since the halcyon days of Snow White and the Seven Dwarfs. It begins as 10 year old Chihiro and her parents discover a tunnel in the countryside that leads them into an old abandoned theme park. While her parents help themselves to the contents of a food stand, Chihiro goes exploring. But as night falls she returns to find that mum and dad have been turned into pigs, leaving her trapped in the spirit realm. Chihiro has to find a way to break the spell. Spirited Away is a feast of glorious animation and intelligent storytelling. As the workings of the director’s wild imagination are laid bare we are offered more magic and innovation than most animators could manage in over two decades.
Jamie Russell BBC4 Movies 2003


What you thought about Spirited Away

A very positive response by the large majority of you – although for some there was confusion about whether the film was intended for adults or children! Should the film be studied for deeper meaning or simply enjoyed for its splendid graphics? Perhaps we need a better understanding of Japanese culture to better appreciate the film’s content. As one member put it, “The extended allegory was lost on me – culture clash?” An oriental ‘Alice in Wonderland’? Are Kafka, Gormenghast or even Peter Pan comparable sources within a Western context? Many expressed admiration for the overall quality of the film and the creativity of the ideas developed within the story. Really enjoyed it; Extraordinary; Amazing and magical; Wonderful gripping story full of charm; Imaginative without the sentimentality of Disney (Quote: Jamie Russel); Wonderful film – funny, imaginative; Magical and frightening; Great humour; Bizarre but gently uplifting; Weird but engrossing; Captivating; Stunning; Unique. The high level of inventiveness and the quality of interpretation on the screen was appreciated by nearly everyone. Beautifully observed and technically brilliant; A very well crafted story; Quite held by the sentiment and the beautiful graphics; Brilliantly imaginative combining the whimsical and the grotesque; Quite delightful; Strangely wonderful; Animation terrific with a good story line; Full of unexpected terror and wonder of an illogical dream – with added humour; Amazing technology. However, some found the plethora of original ideas excessive resulting in a story that lacked cohesion. Immensely inventive – perhaps somewhat ‘overblown’; couldn’t understand some of it; some parts quite sickening; Rambling. Significantly, a large number felt that the film was too long. A bit too long; went on a bit; too long; about three quarters of the way through I thought ‘I cant’ stand any more’! A little over long; ‘When is it going to end! Far too long and crazy. Indeed for one member, the film was ‘Quite murderously boring!’ – and for another ‘I always thought that the Japanese were completely crazy’.