An impressive science fiction allegory whose moral implications are as troubling as they are prescient! Sam, an astronaut and outer space ‘rigger’ minds a dingy mining station. After he nearly dies in a clumsy accident he finds himself faced with a younger and more together version of himself. 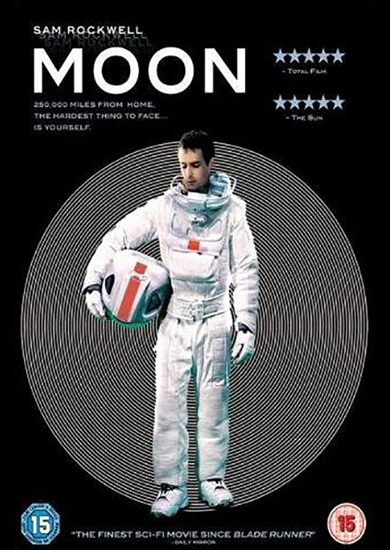 This clever science-fiction allegory has Sam Bell (Sam Rockwell) working on the dark side of the moon in the near future, technically an astronaut but really like an outer-space oil rigger for Haliburton. He works for Lunar Industries, the world’s top supplier of clean energy. Sam minds the dingy Sarang mining station, whose sole purpose is the mining of Helium-3 for us back on earth. His only companions are the station’s computer (voiced by Kevin Spacey) and a number of plants whom he has given names to. Sam is nearing the end of his 3 year contract: long-haired and distracted, he drags about the station performing his duties with minimum enthusiasm. The station’s long-range communications are damaged, leaving Sam only able to speak to his superiors and sparkling wife and adorable baby girl by recorded message. After he nearly dies in a clumsy accident, he awakens, faced with a man who appears to be a younger and more together version of himself. Duncan Jones, the director, has crafted a thoughtful and emotive piece of science fiction, with a clever concept, a single set, some special effects and a powerful, sombre, jarring musical score.

‘Moon’ is set in a future-world that has resolved its energy crisis by mining from the moon. Sam Rockwell plays Sam Bell, a guy with an eerie lighthouse-keeper job. He is the sole human superintendent of the mechanised moon-mine, all alone in the lunar station. His only companion, in the traditional manner, is a faintly malign computer helpmeet, with an ironic voice, provided by Kevin Spacey, with a droll and enigmatic twang. Sam is coming to the end of his three-year tour of duty, when on the brink of freedom something strange starts happening. He has visions of a dark-haired young woman in his kitchenette-area. Driving across the gloomy, pitted moon surface in his big wheeled truck, he sees this vision again. Back in the safety of the main station, he overhears the robot talking to corporate controllers about a ‘problem’ with the human employee. The strength of ‘Moon’ is its evocation of loneliness and the vast silent reaches of outer space. Sam Rockwell is very good and fully deserves a major role as an instinctive and engaging performer.

What you thought about Moon

There was a wider range of responses to Duncan Jones’ ‘Moon’ than we have had for recent films but once more a preponderance of ‘good’ and ‘excellent’ over ‘average’ and ‘poor’. Those enthusiastic for the film found it “classic sci-fi, imaginative and thought provoking”, “spooky and worryingly believable”, “clever and scary – Big Brother on the moon”, “an engaging concept, well worked out”. It had, in addition, “very satisfying levels of complexity”, asked “pertinent questions about ethics and identity” and was “intriguing and atmospheric”. Another view found it “strange, beguiling and soporific” and consequently “disturbing” and “unsettling”. There was a suggestion in three or four responses that the piece was “sub-Kubrick” and was too influenced by ‘2001’. The use of clones and “a mechanised future indifferent to individuals” was both disturbing and depressing”, “a bit grim”. There was widespread praise for Sam Rockwell’s performance and some appreciative references to good music and the subtle menace of Gerty the computer’s voice. For those in the audience less content with the film, there were “too many loose ends”, with elements “confusing and not clearly understandable”. Some responses found it “a clever concept, but dull in execution, too drawn out”, “quite tense in parts but overall unexceptional” with “too many unanswered questions”. It was also perceived as “hard to follow”, “too slow moving” and lacking in “emotional engagement”. Within the generally positive but mixed response to this particular film, there was in many responses a recognition of the importance of the sci-fi genre and a feeling that the society should include it again in future programmes. Shorts –The animations There were 22 references to the shorts which preceded the main film. The great majority (19) found them stimulating and enjoyable, although ‘The Lion and Albert’ was more widely liked. In general, in these response, there was a welcome for something different and innovative along these lines.