The film describes the life of disenchanted former sailor Asa stranded with his farming family on the southern steppes of Kazakhstan. Resented by his brother-in-law, pampered by his sister, and rejected by his potential bride, through Asa’s eyes we witness the harsh but transformative world of the Steppe. 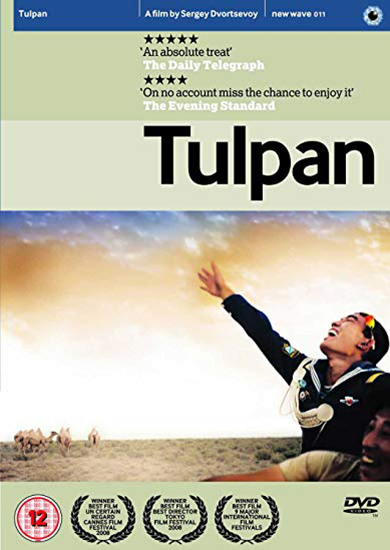 This film, set in the Kazakhstan steppe, shows the economic importance of making a good match and the rigours of life as a nomad. The director, Sergei Dvortsevoy adopts a documentary stance when it comes to the gruelling realities in Kazakhstan, letting the sounds and sight of the steppe tell their own story. The action centres on Asa (Askhat Kuchincherekov). Fresh out of the navy, he returns to his family of shepherds on the steppe. He dreams of owning his own flock, but in order to get one he must first find a wife – the object of his affections being the eponymous Tulpan – and come of age in other ways, if he is to embrace this old way of life that is so new to him. The film is built on a paradox. Asa is a nomad who wants to stay put, despite his friend Boni continually wanting him to head for the bright lights of the city. He is a farmer at heart but shows little aptitude for the task yet refuses to be soured by events and slowly begins to learn. The director offers a real sense of place which complements but never overshadows the central narrative. With its joie de vivre and simple narrative ‘Tulpan’ speaks volumes about a complex and threatened way of life.
‘Eye for Film’, October 2008
Sergei Dvortsevoy’s movie set in the vast, featureless steppe of Kazakhstan, is a quiet little gem. It concerns an idealistic young man called Asa, who has just been demobbed from the navy and now earnestly wishes to go into the family shepherding business. To do this, he needs to get married and has in mind a young unmarried woman called Tulpan, whom in fact he has never seen. Despite lavish dowry offers from his family, Tulpan declines. It’s a refusal that triggers an agony and a dilemma. Should Asa simply head for the city and try to make his fortune? What’s the point of gouging a living out on the steppe anyway? Passionately Asa insists on his pastoral destiny and his determination and the warmth of the family’s traditional yurt home, combine to make this an eminently lovable film.
Peter Bradshaw – The Guardian, 2009

What you thought about Tulpan

There was a warm response to ‘Tulpan’ and its portrayal of the rigours of pastoral life. You found it variously ‘moving’, ‘beautiful’, ‘unusual’, ‘a unique portrait’, ‘touching’ and ‘poignant’. In addition many responses praised the excellent photography and the way the Kazakhstan steppes were portrayed, becoming in essence, the foreground of the action. There were several comments on the conviction and authenticity of the performances, including those of the children and the way that ‘touching moments’ and pathos were communicated by cinematography. The sense of reality was so convincing that one member of the audience felt he/she ‘could almost taste the sand’. Several comments praised the director for his skill in the portrayal of the animals in the film ‘an object lesson on how to work with animals’. The ‘warm homely feel’ and the ‘strength of family bonds’ gave the film a distinctive quality despite the often harsh and barren landscape. There were some critical comments. For some the film was ‘overlong’ and ‘lacked narrative’ and all the ‘dust and desolation’ was oppressive. While praising the documentary quality, some in the audience found it lacking in structure and pace of action. For one, it was a question of ‘yurt overload’. Overall, however, this insight into a different and fascinating way of life led to an enjoyable and worthwhile evening’s cinema.