The latest film by the Spanish maestro contains exquisite cinematography, a rich palette of colours and the hyper-beautiful Penelope Cruz. The film moves between past and present fluently – an intensely wa 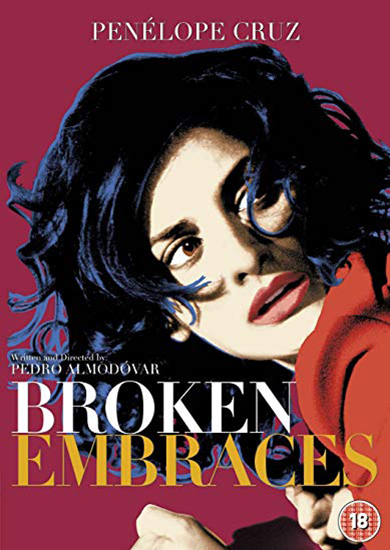 The sensual pleasures of Pedro Almodovar’s lush new meta-melodrama are the more intense for being fleeting. Like Oscar Wilde’s famous cigarette, it is a perfect type of pleasure which leaves one with a feeling that its substance has vanished in the air like smoke. ‘Broken Embraces’ is built on a system of dual narrative with father/son and gay/straight opposites. Lluis Homar plays a blind screen writer in present day Madrid, with an assumed name. While still sighted, he was once a distinguished movie director. He learns of the death of a controversial Chilean financier, Ernesto Martel, who bankrolled his last film and flashbacks take us into this heady period in the 1990s, when he cast the financier’s mistress in a lead role and had a passionate affair with her. This is the bewitching Lena, played by Penelope Cruz. The sheer gorgeous style of ‘Broken Embraces’ as Aldomovar conjures a vivid rich palette of colours and his confident and distinctive handling of the material, gives this film its miraculous fluidity. In this intensely intelligent and watchable film, Almodovar demonstrates a continuing virtuoso fluency in a cinematic language he invented.
Peter Bradshaw – The Guardian, 2009
Pedro Almodovar’s seventeenth film is his longest most complicated and self-reflexive film to date. Jumping genres and fragmenting characters, Almodovar seems to be trying to cram everything he loves about the movies into one film. It starts in present day Madrid, with a blind film maker, Mateo Blanco, blind since a car accident that also claimed the life of his lover, Lena. This cuts through to 1992 with flashbacks to Lena’s story, when she marries her wealthy boss, just before meeting Mateo, when she auditions for a part in his latest film. These are the bare bones of a labyrinthine plot and it’s a tribute to Aldomovar’s careful scripting and the skills of Penelope Cruz and the rest of the cast that this intricate fusion of elements hangs together, in an artful flow of constantly resonating moments. ‘Broken Embraces’ is indeed a film where joy comes lurching out of the darkness to steel you, lift you, make you realise that no matter how bad things get, there’s always something to enjoy.
Time Out, Oct 2009

What you thought about Broken Embraces / Los Abrazos Rotos

Almodovar’s mysterious, enigmatic and rich film ‘Broken Embraces’ gave the audience considerable pleasure, as the last film of 2010, along with the wine and the mince pies. There were many comments in praise of the “lovely, witty, strange film”, “the unusual and powerful storytelling”, “the absorbing, mysterious atmosphere” and the clever and fluent handling of the dual narratives and the flashback sequences. In general you enjoyed “the set of twists and turns”, the way the film held the attention, together with a sense of “fun, pastiche and melodrama”. There was also a constant theme of praise for the visual qualities and the cinematography”, “beautifully shot”, “fabulous, saturated colour”, “beautifully filmed”, “beautiful to look at”. As a director, Almodovar provided the potential for some remarkable performances and in particular, in your view, the ‘tour de force’ of Penelope Cruz as Lena, whose power, range and emotional impact on the screen struck many of you. You also enjoyed Lluis Homar as Mateo/Harry Caine and Jose Luis Gomez as Martel, the businessman. Narrative, acting and photography together made for a “beautiful seamless film – an emotional continuum”, “powerful stuff from a master film-maker”. There were the usual cautions – “intriguing but a bit pretentious”, “promised more than it delivered”, “slow start, better ending”, “far-fetched in places”, “some over-the-top melodrama”. More blunt were the terse remarks “self-indulgent nonsense” and “Rubbish”, though these were very much in the minority. There was no doubt, however, for most of the audience, ‘Broken Embraces’ was a very enjoyable film and ended the first half of the 2010-2011 season on a cinematic high.