New director Andrea Arnold demonstrates her mastery of and fluency in the social – realist idiom and makes it fizz with life. A breath of fresh air! At the centre of the film is Mia, a tricky 15 year old girl, difficult, insecure, who has one interest in life: urban dance. Katie Jarvis gives a wonderful performance as Mia in this tense drama. 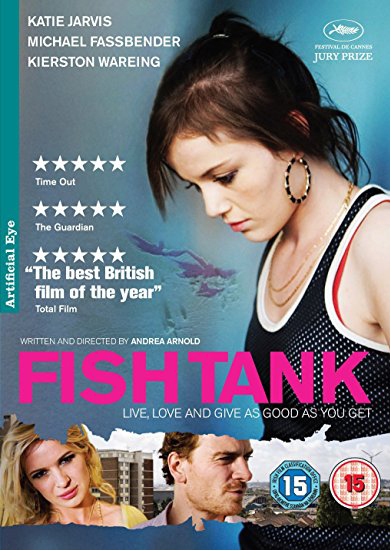 In this film, Andrea Arnold has demonstrated her fluency in the in the social-realist movement and simply makes it fizz with life. Arnold finds a way into the fashionable notion of a broken Britain, but in place of dismay and contempt she offers tenderness and hope. At the centre of the story is newcomer Katie Jarvis playing Mia, a tricky 15 year old in trouble with the social services, after a contretemps with another girl in one of the windswept municipal canyons between tower blocks. She has inherited from her mother a stroppy insecurity and a fondness for booze. Mia has a younger sister, Tyler – a scene stealer of a performance from Rebecca Griffiths. There is no dad in the picture and Mia has just one interest, urban dance. These lives are disrupted when Mia’s mother miraculously gets a new boyfriend. Connor comes from a marginally more middle-class world and he is , tellingly, a breadwinner, a man who actually works for a living. Mia has an enormous poignant capacity for love, but she never received any form from her damaged mother. So she has no idea how to express or manage love and it is her suspicious longing for the safety and comfort of a father’s care that makes the situation so explosive. There is an unwatchably tense finale where Mia shows a determination to survive, outgrow her surroundings and forgive. Katie Jarvis gives a wonderfully honest and open performance and her relationship with Michael Fassbender, gives this film its beating heart.
Peter Bradshaw The Guardian Sept 2009
Andrea Arnold’s new film brilliantly and sensitively buzzes with life and offers its own take on our world and our city. It delivers, in spades, attitude, humour, sadness, love, anger, hope, all wrapped up in a way of telling stories that is very much the director’s own. It has realism, but has an intimacy, an immediacy and a dash of poetry which offers a new spin on some familiar territory . Andrea’s camera sucks up the territory on which she films flats, busy roads, flyovers, scraps of land and suburban shop parades all lend a strong sense of place without romanticising. Arnold tells the tale at the height of summer so the sun is always shining and her way of presenting Mia is to stay close to her at all times to show us her world from her point of view. We know there’s more to Mia than antagonism and knee jerk violence once we’re curious about what’s going on in this girl’s head and we become deeply involved in her sense of herself and her future.
Time Out September 2009

What you thought about Fishtank

There was high praise for Andrea Arnold’s powerful, if unflinching realism, in the responses, with just over 80% in the ‘excellent’ or ‘good’ categories. It was described as “wonderfully crafted, tightly observed portrait of an unloved teenager chained to her environment”; “thought provoking and uncomfortable”; “gritty, realistic, heart-wrenching”; “powerfully and desperately sad”; “a brilliantly grim and painful film – a bleak portrayal of inner city life”. There was a consistent theme in the comments that while not ‘entertaining’ in the conventional sense, the film’s power was to convey a sense of the central character’s potential, with little real hope for a way out or a different future. In some comments, however, Mia was seen to have developed emotionally and to have matured by the end of the film and the concluding sequences suggested a way out and a positive future for her. Some of you found the dance between the mother and her daughters at the end of the film profoundly moving in the context of the harsh indifference of relationships in the film elsewhere. In almost every response in every category there was praise for Kate Jarvis’ role as Mia – “brilliant”; “superb”; “totally authentic”; “gripping”; “remarkable in subtlety and expressiveness”; “a fantastic performance”. There were reservations and criticisms of course. For some, the film was “worthy but not enjoyable”; “a hard film about oppression of living in a deprived community”; “I needed a little light to relieve the dark”; “cannot believe that families live without affection”; “characters seemed exaggerated”. The critical view was summed up by “Big message – very tedious” and “an unremittingly dismal, albeit very convincing, film”. Overall then, as one comment put it “great film but tough, tough, tough”, while another viewer reflected that “it went into some pretty foreign territory for a stockbroker-belt audience, but it highlights a few realities that are rarely addressed or understood”.