The Secret in Their Eyes

Film swapped into programme due to un-availability of planned film. 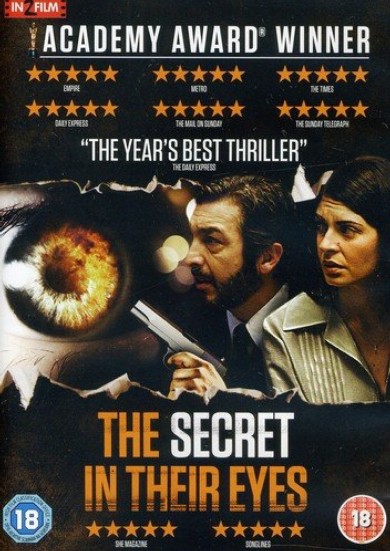 ‘The Secret in Their Eyes’, which won the best foreign film at this year’s Oscars, is a supremely watchable, well-made and well-acted movie, with a dark sinewy sense of history. It is a tremendously slick thriller, closer in some ways to television drama than cinema, but the director, Campanella, has achieved a remarkable big-screen flourish. Ricardo Darin has an enormous presence as Esposito, a retired Buenos Aires prosecutor who broods over a life of disappointments and lost opportunities. He is obsessed by a horrendous unsolved crime from the bad old days of the 1970s, the murder of a young woman, which poisoned his career and his life. We are carried in flashback to grim 1970’s Argentina, the ugly paranoid arena of the junta, where people were afraid to ask about those who had ‘disappeared’, which created rich opportunities for all criminals, both political and non-political. Esposito’s obsession with the hideous crime, is a way of redeeming himself for the simple mischance of being in love. The charismatic Darin makes a seductively melancholy and unexpectedly gallant hero.
Peter Bradshaw, The Guardian – August 2010
The appeal of ‘The Secret in Their Eyes’ lies in its lithe and mysterious quality. This is a murder mystery. It is also a love story, a drama about memory and bad faith, and even in an oblique way, a political allegory about 1970’s Argentina. Adapted from the novel by Eduardo Sacheri the film is primarily set in 1974 Buenos Aires but with flashforwards to the present day and flashbacks. The event that sets the plot in motion is the brutal murder of a beautiful young schoolteacher. Twenty-five years later, Benjamin Eposito, a legal investigator is still haunted by the case and is trying to write a novel about it. He befriended the victim’s traumatised husband and tracking down the killer became a personal quest for him. The case became intertwined with his private life, as he was increasingly attracted to his boss Irena Menendez Hastings and finding it ever harder to hide his disdain for the corruption and brutality endemic in Argentinian society of the period. The film has a deep emotional resonance, largely attributable to Darin’s performance as Esposito, the man with “a thousand pasts and no future” The film is about love, loss and memory and at the same time in hard-boiled film noir territory. It takes elements of the conventional murder mystery and spins around them a story that is both lyrical and heavy with pathos. Darin’s Esposito is one of those crumpled idealists that you just can’t help rooting for.
Geoffrey MacNab, The Independent – August 2010

What you thought about The Secret in Their Eyes

The warmth of the applause which greeted the credits for Juan Jose Campanella’s slick and moving thriller/love story was matched by statistics and comments in the response slips. This was both the largest number of responses for the season (and for previous ones) and the highest percentage of ‘excellent’ grades The superlatives flowed from your pens: it was ‘truly superb’, ‘beautifully constructed’, ‘flawless’, ‘full of passion’. ‘morally challenging’, ‘absolutely enthralling’, ‘with plot, dialogue, cinematography in perfect proportions’. Many of you enjoyed the ‘multi-layered story’ and the dark, sardonic humour of people working in dangerous and troubling political times. The power and tension of the story was communicated by ‘wonderful acting’, ‘heart-stopping performances from Esposito (Ricardo Darin), Irena (Soledad Villamil) and Sandoval (Guillermo Francella)’ and ‘highly expressive beautiful music’. The impact of the film was summed by many of you as ‘breathtaking’, ‘faultless’, ‘stunning’, ‘unique’, ‘a tale of love, loyalty, irresolution and duplicity and of terrible vengeance’. One member invented a new category for the response slip ‘double excellent, and ten responses (11%) considered it the best film so far, ‘a contender for the Godalming Film Society Oscar’.