Film swapped into programme due to un-availability of planned film. 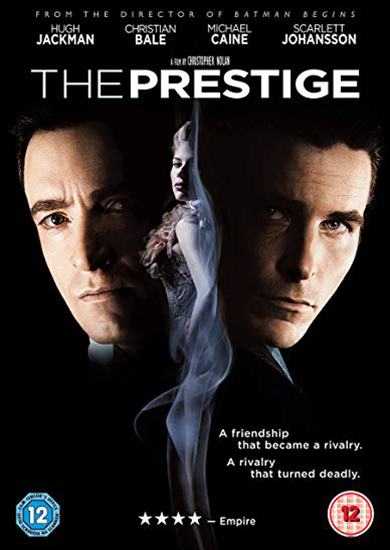 In 'The Prestige' the rivals are stage magicians in late Victorian London, Robert Angier (Hugh Jackman) a smooth American and Alfred Borden (Christian Bale), a rough-hewn cockney. We first see them together dressed as working men planted in the audience to be brought on stage to assist a magician performing a trick that involves a woman being bound with ropes and locked in a glass box filled with water. In a voice-over commentary, Cutter (Michael Caine), an elderly deviser of magic equipment and a respectful, very knowing artisan among artists explains that a magic performance unfolds in three stages. The first is ‘The Pledge’; the second, ‘The Turn’, centres on a disappearance; in the climactic third part ‘The Prestige’, a person or object is brought miraculously back, leaving the audience stunned and delighted. This sequence of events informs the structure of the film as well as of the tricks. The movie beautifully creates the world of stage illusion, as well as looking at the ethos, the ethics and the ambitions of the performers. The film does not proceed chronologically. It moves around in time, developing the story of the evolving relationship between Angier and Borden and the reflections of Cutter as the crucial observer. ‘The Prestige’ is a dazzling piece of work: gripping, suspenseful, mysterious, moving and often darkly funny.
Philip French , The Observer - November 2006
Set in a world of top hats and disappearing bunnies, ‘The Prestige’ is a superb puzzle-box thriller. Christian Bale and Hugh Jackman star as magicians in turn-of-the-century London locked in a bitter feud. Directed by Christopher Nolan, it’s a film that’s deliberately designed to pull the wool over your eyes The fragmented story is full of flashbacks, often told via diary entries that prove distinctly untrustworthy. The two leads excel as the rival conjurors, Jackman aristocratic, Bale with a cheeky borderline-panto cockney patois. It’s an epic tale of professional rivalry that ends with some fantastic hocus-pocus. Supporting turns from Michael Caine, Scarlett Johansson and David Bowie add a touch of class. In the end the real magician is Christopher Nolan, the director. His “now you see it, now you don’t” magic trick delivers prestige by the bucket load. In fact, it brings the house down. Abracadabra.
BBC Film Review – November 2006