A great classic triumph of Italy’s post-war neo-realistic cinema. For over 50 years this film has been renowned for the truth it tells and its powerful emotional construction in this simple fable of a boy, his father and their stolen mode of transport. 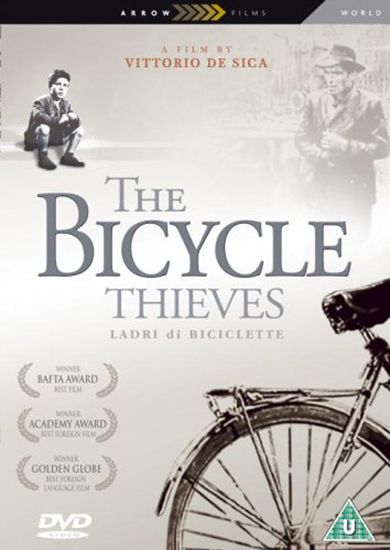 Neo-realism never got more real than in Vittorio de Sica’s 1948 classic ‘Ladri di Biciclette’. This study of poverty in post-war Rome is an astringent and unbearably painful classic. Antonio is a poor man who is thrilled when he is at last offered a job, delivering and putting up movie posters. But he needs a bicycle and must supply his own. His wife Maria, pawns the family’s entire stock of bed linen to redeem the bicycle already hocked. On his first day at work, the unlocked machine is stolen and Antonio drops everything to go on a desperate odyssey through the streets, with his little boy, to get the bicycle back. This is a story that magnificently withholds the comic or dramatic palliatives another sort of film might have introduced. The son is the intimate witness of the father’s humiliation, his inadequacy as a provider. Antonio seems unable to embrace the obvious redemptive moral – that his son is the important possession, not the wretched bicycle. The father is obsessed with finding a stolen needle in the urban haystack, obsessed with getting his job back. Again and again he ignores his little boy, while scanning the horizon for his bicycle. This film shows poverty’s authentic sting: banal and horrible loss of dignity. ‘Bicycle Thieves’ is a brilliant, tactlessly real, work of art.
Peter Bradshaw, The Guardian – Dec 2008
This was one of the key works of the Italian post-war neo-realist movement,a school which in the late 1940s and early 1950s provided a platform for the young Michelangelo Antonioni and Luchino Visconti as well as Vittorio de Sica, in a form of filmmaking that applied poetry as well as politics to the lives of ordinary working people. ‘Bicycle Thieves’ is a beautifully crafted, moving tale which follows Antonio (Maggiorani), an impoverished young father desperate to earn a crust. Landing a job as a bill-poster, he is distraught when the bicycle he needs to do his work is stolen. He and his son (Staiola) then embark on a long and dispiriting journey to get it back. The allegorical nature of the story – a crushed society struggling to regain purpose and dignity while faced with powerful and incomprehensibly malign forces – is secondary to the profoundly humane nature of de Sica’s film. It is a work of quiet simplicity. The film consists almost entirely of father and son, engaged in their increasingly hopeless quest. Maggiorani’s limitations as a performer are hardly a problem. After his fleeting moment of pride at landing his job, he is barely required to project anything other than degrees of sadness and despair. Only occasionally does the story’s pathos leak into sentimentality, as in the restaurant sequence, and although it sometimes lacks emotional complexity, this is tremendously affective filmmaking.
Film 4

What you thought about The Bicycle Thieves / Ladri di Biciclette

In almost every case, members felt that this was an exceptional film that engaged its viewers at all levels – the quality of the cinematography, the acting, the story, the historical context (for us): Moving; touching; atmospheric; tightly paced; gripping but unresolved; heart rending; brilliant and without those ‘special effects’; poignant; political; great tension throughout with an inevitable end; tragic; so sad but so well done; certainly a classic; simply the most magnificent film you have screened. Perhaps there was some surprise that a film made in 1948 could exhibit so many of the qualities of a good (modern?) film of its genre: Packs a punch with a gritty world view; lovely B&W images; a classic B&W film showing human relationships and emotions; moving portrayal of a parent child relationship; Bruno stole the show! The little boy deserved an Oscar; so much conveyed by the actors’ faces and expressions; lovely acting with some very evocative scenes; an all time great – it always goes straight to the heart; A fascinating historical document; hard to believe that it is over 60 years old; really evokes the strains of an era; amazing to see all those outside shots; fascinating dustcarts (Lancia?); music very supportive and suggestive; Inevitably the story engaged its audience: I felt so sorry for the father; talk about looking for a needle in a haystack; why not rent a bike!; I was longing for the father to show some affection towards his son; puts a perspective on our own secure lives and what we have got; a sad reflection on what faced so many at that time; Those who had reservations were still generous in their responses: Over egged but probably to emphasise the point – and to appeal to an Italian audience; I thought it might have been more potent as a silent movie! One dimensional and simple – but a lovely portrayal; a little sentimental and perhaps too long; … apart from one member: Too old – the first 10 minutes were enough! The Banker (short film shown first) Some positive reactions: A neat short with an unexpected twist; very funny – but what a frightening prospect; very well put together; amusing; excellent – especially the twist at the end; cleverly sculpted; very good; But not all: I could have done without ‘The Banker’; difficult to see why this short film was made; not very original; rather greasy!