In a poverty-stricken Chinese village, a substitute teacher (13yr old Wei Minzhi) is placed in charge of a class and promises that she will not let her pupils run away to the nearby city. When little Zhang absconds, teacher Wei has to make good her promise! 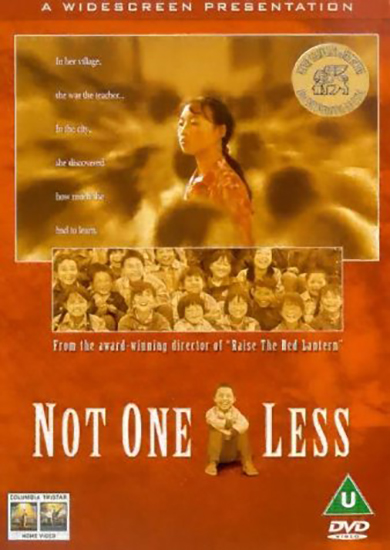 The film is set in the present, in a small village in Hebei province. When teacher Gao is called home to care for an ailing relative, the village mayor hires Wei Minzhi as Gao’s temporary replacement. Thirteen-years-old Wei is barely older than her students and her teaching skills are next to non-existent. But her stubbornness and determination know no bounds. Wei focuses her efforts on the ten yuan bonus that Gao offers her if all 25 students are still in the class when he returns. But troublemaker Zhang manages to run away from school, to try to find work in the neighbouring city to support his ailing debt-ridden mother. Wei now has a mission: to get to the city, recover Zhang and thus claim her bonus. ‘Not one Less’ is much more than a film about kids, helpful adults and a happy ending, although there is a strong ‘audience-friendly’ feel. All the actors in the film are amateurs, most of whom play a version of who they are in real life. This semi-documentary aspect results in a fascinating uncertainty. There is a play between the different genres of realism, staged documentary and fiction, which gives the film a special depth of focus and understanding.
Sally Kraiser – Persimmon Magazine, Autumn 2000
When substitute teacher Wei is placed in charge of a group of unruly peasant children, she’s in over her head, since she only knows how to copy out half the lessons left by old Teacher Gao, who instructed her how to conserve chalk – a precious commodity to be prized and respected. There is a battle of wills between Wei and the prankster Zhang, which after one striking confrontation, results in Zhang running away to make a living in the sweatshops and restaurants of the city. Wei has to make good her promise to Gao and venture into a strange city to bring him home. The film feels like a documentary – shot in a way with cameras hidden and unobtrusive – to allow the untrained performers to behave naturally. Their lives are portrayed with a keen understanding of the social and political forces at work. The film inspires genuine tears and laughter but never teeters into sentimentality. It serves as a reminder of how much stubborn courage and resolve can possibly accomplish.
Time Out, October 2000

What you thought about Not One Less

There were fewer responses than usual because the snowy weather reduced the audience but again, an overwhelmingly positive view of the film. You enjoyed the documentary-style realism and the sense of a small community in a believable, if unfamiliar world. Many comments found the story “gentle, charming warm and funny” and additionally found “subtlety and entertainment” in the portrayal of relationships ‘more’, as one response put it “than meets the eye”. There was a quality of warmth in the film which several comments attributed to the authenticity of the non-professional actors, with particular praise for Wei and her stubbornness and determination in her quest. The ‘personal and engaging’ quality of the way the film was made and the “beautiful cinematography” combined with an emotionally pleasing conclusion made the film “very enjoyable and unusual” for many in the audience. The only reservations were about the narrative pace – “too slow in parts” – and the potentially propagandist view of the Chinese rural and urban society, although the facts of poverty and very limited educational opportunities were not overlooked.