This distinctive serio-comedy of mid-life crisis is the story of Larry, a mid-west professor of physics who is suddenly faced with the bizarre wreckage of his life. Pitched between broad, bright comedy and bitter darkness, this film confirms the Coen brothers as pre-eminent filmmakers. 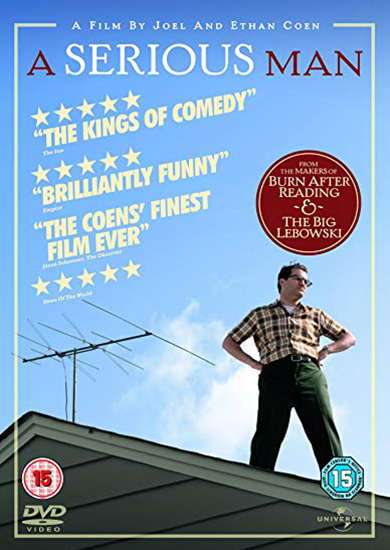 This sublimely funny, involving, utterly distinctive serio-comedy is a film of mid-life crisis in the American Midwest in the 1960’s. Larry Gopnik (Michael Stuhlbarg) is a professor of theoretical physics whose life reaches crisis as his son’s bar mitzvah approaches and his wife astonishingly announces that their marriage is over. The Coen Brothers’ authorial identity as filmmakers has always marked out an intriguing spectrum between broad, bright comedy and bitter darkness, where their creations are pitched at just the right distance between each. So it is here. The Coens audaciously begin the film with a mysterious sequence in a 19th century Polish shtetl, an unsettling folk tale drenched in mortality and fear. It starts the film the way it means to go on: uncomfortably. Euphoric, sad and thoughtful all at once, this superb and intelligent comedy is rounded off with a gloriously well-crafted apocalyptic vision, establishing the Coens as America’s pre-eminent filmmakers.
Peter Bradshaw, The Guardian – Dec 2008
This film set at the end of the 1960’s, shows the life of Larry Gopnik, a physics professor on the brink of tenure that will guarantee him career security, whose life starts to fall apart. His wife tells him she wants a divorce. His overweight, mentally challenged brother, Albert, sits on a couch all day writing a tome on probability. His son Danny owes a school bully 20 dollars for marijuana. His daughter is saving for a nose job. It all adds up to a portrait of dysfunctional Jewish suburbia, where encounters with various local rabbis, for example, and threats to the mid-mannered professor from an aggrieved Korean student, insist on the absurdity of human existence. The narrative itself roams and wanders like traditional folklore, where there is uncertainty about actions and their consequences. But the ending has a sudden and apocalyptic blackness, and the mood is stripped of sunny nostalgia. ‘A Serious Man’ is a more serious, more abrasive version of their aesthetic than the Coen Brothers have revealed before.
Sukhdev Sandhu, The Daily Telegraph – Nov 2009
Drawing on the actual milieu of their own adolescence, the filmmakers – past masters of outré production and sardonic genre subversion – play things straight and tell a story that is sincerely engaged with the challenge of unjust suffering. The Coens nod at some familiar stylistic tropes – florid swearing, sexual euphemism, crusty, aged characters – but the film’s potency is rooted in quiet precision and detailed realisation. Roger Deakin’s typically polished photography gives an impressively hard edge to Midwestern suburbia while the sound design is a wondrous melange of soup-slurping, hacking coughs, gastric juices and ominous clanging. Stuhlbarg, a Tony-winning stage actor, leads a largely unknown but impeccable cast.
Ben Walters, Time Out London – Nov 2009

What you thought about A Serious Man

This film elicited a range of responses which varied from enthusiastic approval… "Very funny – but toe curling; extraordinary Jewish humour; highly entertaining; enormously enjoyable even if I occasionally laughed shame facedly; a brilliant film; many surprises; really enjoyed this one; black Jewish humour at its best; funny in a sad / dark kind of way; witty, sad and very Jewish; fascinating, certainly different; authentic; utterly original, surrealistic; entertaining but bizarre; haven't laughed so much at a film for a long time! Can we have more? I loved it." … through imperfect comprehension… "Obscure – very Jewish; strange series of events – interesting insights into Jewish life; need to be Jewish to understand the folklore! Funny in parts – but not sure I followed all the meanings; confused as I could not make the links; didn't understand all the Jewish stuff; rare insight into Jewish culture; amusing but little more – might have helped if I was Jewish American; 'by Jews for Jews';" … to dislike… "I would not call the film a comedy; ironic humour of the events in the life of a victim – hard to find amusing; series of portrayals of 'Sod's Law'; a self indulgent play on awfulness disconnected from the reality of early '60s; I am none the wiser! A little too black for me! Very painful to watch; another film about mid-life angst; quite boring; did not enjoy; compelling but irritating – a picture of blackness; some funny scenes but not my sense of humour; all of that for the dark twist – no thanks." There was general approval of the quality of the film making… "Perfectly balanced acting, editing, set design and direction; excellent camera work; classic stuff; beautifully put together; acting and direction are brilliant; great characterisation; splendidly filmed; great sound effects; superb acting; loved the ghastly '60s interiors; where did they get all those old men from?" … and 'recognition' that the Coen brothers are cinematic icons… "The usual kind of madness that is the Coen brothers; I guess the Coens don't go in for happy endings; the worst Coen brothers film I have seen; for the Coen brothers – very poor; and I thought I had problems – nothing compared to the Coen brothers!" The abrupt ending left many of us somewhat puzzled: "Surprised by sudden abrupt end! The end was rather abrupt! Blasted from every angle – the tornado was a fitting image to end on." The conclusion? 'A Serious Man' is probably just the kind of movie we should screen to stir up a film society audience!