Sensitive Maria - who is yoked for life to a brutal husband - uses a camera to nourish her creativity. Shot in atmospheric sepia tones, this a gentle, thoughtful and understanding film with positive sentiments at its heart. 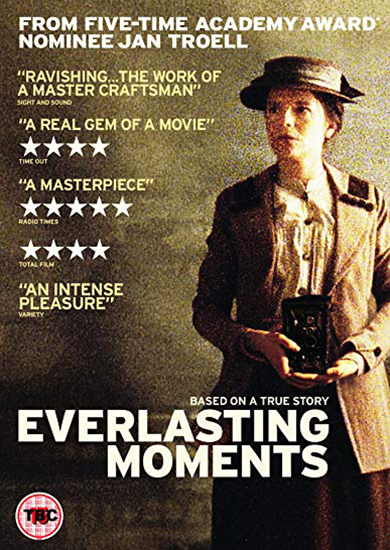 ‘Everlasting Moments’ is a new film by veteran Swedish filmmaker Jan Troell. This period family saga was Sweden’s official submission for the Oscars, a mark of enduring respect. The film spans a generation in the life of a working-class family, the Larssons. The growing gaggle of children live in fear of their abusive, alcoholic father, Sigfrid, but it’s a sign of Truell’s skill that he sidesteps wallowing in misery, with touches of contrast and levity. Sigfrid’s wife, Maria, the focus of the film’s sympathies, is played with wonderful grit and shading by the Finnish actress Maria Heiskanen. Her discovery of an old camera draws the film into its secondary and more beguiling interest, in the early days of still and motion photography. As Maria is hired by locals to take their portraits, Troell gently explores the fixity of the image and its relationship to life’s passing show. The director, in dealing with his heroine’s longings and choices, leaves you with an indelible impression of her.
Daily Telegraph - May 2009
This intelligent and optimistic Swedish film is based on the story of a put-upon working-class woman who finds consolation in photography. Maria Heiskanen plays sensitive Maria, yoked by unbending Christian principle to brutal, philandering often-drunk Sigfrid. She finds an old camera to nourish the faint stirrings of creativity within her. This results in a tremulous, chaste romance with the local portrait photographer, who offers help and expertise along the way. Shot in atmospheric, sepia tones, this is a modest film with gentle, pleasing sentiments at its heart.
Andrew Pulver, The Guardian - May 2009

What you thought about Everlasting Moments

There was a very positive response to Jan Troell’s intelligent and optimistic ‘Everlasting Moments’. You found it “wonderfully atmospheric”, “very moving and involving” and “beautifully observed”. There was praise for and appreciation of the narrative pace, the construction, the storyline and the subtle and sensitive acting, particularly by Maria Heiskanen as Maria. One member of the audience felt it was “a masterpiece” where “neither the director nor the actors made any mistakes”. The range of human emotion was “accurately and honestly observed” and enhanced by the sepia tones of excellent photography. Many of you admired the film for its “compassion and truthfulness”, its “beautifully old-fashioned style” and its “moving and gentle” perspective on life and experience. It was for one viewer “a triumph of strength over diversity in marriage” and thus “sensitive, compelling and life-affirming”. The direction was “skilful and subtle”, ensuring that the film avoided being “over-sentimental or relentlessly miserable”. There were some minor criticisms of the “rhythm of the film” and “some confusions in the script” and a sense of the ending being “a bit hurried”. Several viewers thought that the film was about 20 minutes too long. Overall, however, this “delicate treat of a film” was “a film to eulogise about” and a “lovely warming experience”. It was voted by a number of you as the best of the season so far.