An exciting crime, romance, thriller starring Cate Blanchett as a woman trying to bring to justice the man responsible for her husband’s death. Her plans for revenge go terribly wrong. Fast moving, exciting with excellent music 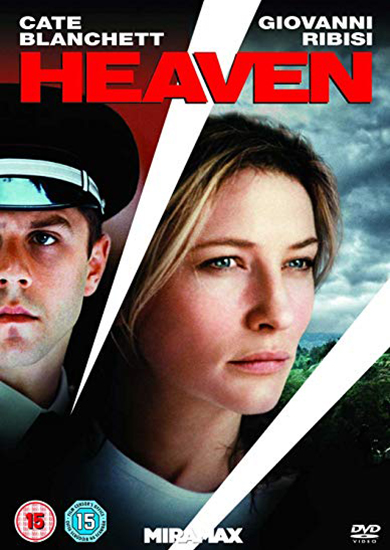 Here is a movie that begins as a thriller, turns into a drama, ends as a love story and yet in the final moments, we’re still unsure what the experience has been. Written by the late Krzysztof Kieslowski (of ‘Three Colours’ fame), the story follows the path of Philippa Pacard (Cate Blanchett), a British schoolteacher, residing in Italy who makes headlines when a bomb she plants in the office of an alleged drug lord takes the lives of four innocent civilians instead. She finds no compassion from the police (who themselves are ‘on the take’ of her intended victim). Only a young police officer, Filippo (Giovanni Ribisi) finds himself drawn to her, falling for her flaws, misdeeds and all. The experience of the film remains in the mind, largely because of the actors, Blanchett and Ribisi, whose performances are like a thunderclap in an otherwise quiet movie. Ribisi’s restrained exterior demeanour speaks volumes of the inner emotional turbulence his character undergoes, while Blanchett enhances her pedigree for acting excellence. These two fine leads involve us in their seemingly unbreakable bond, drawing us in and making us care, causing us to seek deeper meanings and connections beneath the surface of events.

English schoolteacher Philippa (Cate Blanchett) has watched helplessly as corrupt businessman Vendice destroys the lives of the people she loves. He has turned her husband into a heroin addict and regularly peddles drugs to schoolchildren. Determined to end the cycle of addiction and misery, Philippa plants a bomb in Vendice’s office. Unfortunately, the plan goes tragically wrong when a cleaner mistakenly picks up the bomb and four innocent bystanders are killed in the explosion. Philippa is immediately arrested and labelled a terrorist. Thankfully, idealist policeman Filippo is moved by her story and risks his career and freedom to aid her dramatic escape. The two fugitives set about bringing the guilty to justice.

What you thought about Heaven

Whether the film was seen as a tragedy of revenge, a thriller or a love story, many responses paid tribute to its compelling atmosphere, its skilful cinematography and its narrative tension. The “tense and watchable” sequence of events was “fascinating and powerful” as was the sense of “subdued moral heroism” as two innocents took on a corrupt state machine.

One member of the audience was gripped by the “terrible certainty” that Philippa would die after the deaths she had caused and found “great dramatic tension” in the way events developed within this shadow.

Several members mentioned in their responses the power of long, still, steady countryside and landscape shots, creating an illusion of permanence and freedom, while, in reality the net of retribution was closing in on the two main characters.

For many in the audience the “excellent atmospheric” music added a further emotional dimension to a “tense and emotional film”.

Some, however, took a different view. The film was “slow and disappointing”, “implausible”, “beautiful locations, but incoherent”, “entertaining but not convincing”. One viewer felt that the film failed to make the transition from the thriller of the opening sequence to the love story of the ending. For several, the ending itself was “confusing” and “a fantasy” which was out of step with the rest of the film. One member was quite blunt, “excellently acted, silly story”.

Nonetheless, the majority of the audience found ‘Heaven’ a very worthwhile film, with exceptionally good acting and a strong emotional appeal.