This latest film by the famous Japanese director is an acutely observed and tenderly constructed portrait of a family gathering on the 15th anniversary of the tragic death of the youngest son. Sensitive, perceptive and beautifully paced, the film is a moving portrayal of family tensions. 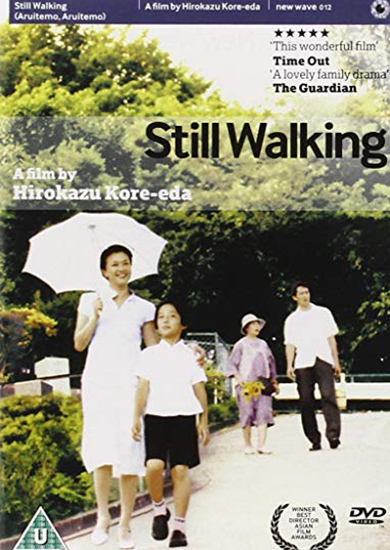 ‘Still Walking’ is a supremely subtle portrayal of the tensions within a Japenese family that puts director Hirokazu Koreeda in the same league as his country’s masters of domestic drama. This greatly probing film, fixed firmly in the specific ‘home drama’ mode of Japanese cinema is by no means inaccessible to western audiences. Families not getting on, is an international language, after all. The film examines how we carry on our lives in the shadow of loss. The story is an attempt to recapture lost time by reconstructing a family day together. Eased along by summer sun and gentle guitars strumming on the sound track, the film springs from an authentic sense that simmering tensions are as much about what remains unspoken as they are about the actual injuries we cause one another.
Sight and Sound – February 2010
“In this film, I have contemplated and portrayed the seemingly minute yet significant wavelets that ripple across the course of our long lives. There are no typhoons in this film. Only the ‘before’ and ‘after’ of the dramatic events revealed. I was determined to make ‘Still Walking’ brim with life. My intent was to capture a moment of life itself and to fold into that moment all the ambiguities of family memory, just like the photos in an old family album”
Koreeda Hirokazu – Director (quoted in ‘Sight and Sound’) – February 2010
This is a ‘family movie’ in the classic Japanese style. Yoshio Harada plays a retired doctor, an imperious, querulous old man, who lives by the seaside with his elderly wife. His two grown up married children are coming for a visit. There is a daughter who is close to the mother and shares her exasperation with the cantankerous father and his ways. She is continually urging her parents to come and live with her and her hearty, amiable husband. The son is Ryota who has just married a widow and become stepfather to her young boy. The father disapproves of the marriage as being somehow second best. Unlike family dramas as conceived of in British or American films, there are no crockery-smashing rows. Resentments and anger are contained within the conventions of politeness and respect. This, I think, reflects the truth about the quiet un-dramatic real lives of all families everywhere. The gentle, lovely film is impossible to watch without a lump in the throat.
Peter Bradshaw, The Guardian – Jan 2010

The audience found considerable pleasure in this Japanese family drama and its quiet understated portrayal of family life. What struck many of you was the range of emotions subtly communicated - ‘happiness, sadness, resentment, unspoken tensions’ - within the ‘superficial serenity’ of the film which was communicated with a ‘restrained sensitivity’. Other comments referred to the ‘touching, charming yet melancholic detail of domestic life’ and found clear parallels with family life everywhere, despite the intriguing and interesting specific features of Japanese family relationships. There was praise for the ‘pace and observation’ in the direction and the filming which made it for one viewer ‘a film to get lost in’. The ‘delicacy of the undercurrents of family life’ was beautifully observed, with a strong sense of convention and restraint caught through the ‘imaginative and original’ camerawork, which also conveyed the intimacy of family life. There was an awareness in several responses of the ‘sadness of missed opportunities’ but with ‘the uniquely Japanese perspectives’ creating a real interest. Among those who thought highly of the film there was praise for the skilled but understated performances and the excellent accompanying music. For those with reservations, the film, albeit ‘gentle and sincere’ created little reaction and was at times ‘almost soporific’. It seemed ‘too long and lacked pace’ and although it had an ‘enjoyable ordinariness’, ‘nothing really happened’. The most serious critical comments were that the film was ‘mind-numbingly slow’ and ‘very dull’. Nevertheless, the majority of the audience felt moved by and involved in the subtleties and tensions of family life, with its strained politeness and ‘bittersweet’ undercurrents.