After suffering a near fatal head injury, talented rodeo cowboy Brady (real life cowboy Brady Jandreau) is forced to re-evaluate his future. Set against the South Dakota Black Hills and the actor's real-life family, the film brings a quiet authenticity to the exploration of humanity. 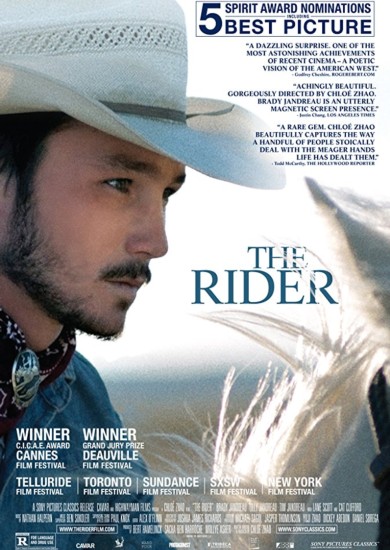 Here’s a movie that’s in no rush to work a path into your head and heart. It’s the intent of Chinese-American filmmaker Chloé Zhao to carve a story out of the real lives of the people she puts on screen; her docu-fiction technique was what distinguished her striking 2015 feature debut Songs My Brothers Taught Me, set among the Lakota Sioux in South Dakota’s Pine Ridge Indian Reservation. Zhao’s follow-up is set in the same area, and again uses non-pro actors to achieve a realism Hollywood can only dream of achieving. Once The Rider hooks you – and believe me, it will – there’s no way you will ever forget it.

The remarkable Brady Jandreau – a star in the making with no acting experience to lean on – tackles the central role of Lakota cowboy Brady Blackburn, a 20-year-old saddle-bronc rider and horse trainer who lives for the rodeo. Then a bronc bucks him hard in the skull and puts him in a three-day coma; the doc says another kick like that will kill him. As it is, Brady, his fingers gnarled in a permanent curl, is already feeling a dizziness and weakness as foreign to him as a desk job. Zhao knew Brady before and after his similar real-life accident and uses – notice we don’t say exploits – his feelings about how competition define a life to construct a film of touching gravity and rare grace.

She also enlisted the actor’s own family and friends, playing barely fictionalized versions of themselves to add to the authenticity. That’s Tim Jandreau as Brady’s hardcase gambler father and Lilly Jandreau as his on-the-spectrum sister, whose emotions flow as freely as the white river on the reservation. Tensions rise when Dad – Mom is dead – sells his son’s favorite horse just to keep a roof over their heads. Even in a beat-up trailer, a day-to-day existence is difficult to maintain since Brady’s rodeo earnings dry up.

Zhao never resorts to crass manipulation and tearjerking to hold audience attention. The soul of The Rider resides in its people, proud members of the Lower Brule Sioux Tribe. They include Brady’s best friend Lane (Lane Scott), a bull rider paralyzed by a car accident that injured his brain and keeps him in rehab, a shadow of his former self. Brady finds solace for a while in training wild horses, a job he’s being doing since childhood when he showed a natural empathy for building trust in animals that won’t be saddled and forced to conform. In these training scenes, Zhao and cinematographer Joshua James Richards achieve a delicate visual beauty that beggars description.

Set against the stunning vistas of the American heartland, The Rider explores the physical and
psychological impact on a modern cowboy who feels useless if he can’t do what he was born to do. Should he risk his life for his idea of what gives him value? Zhao explores these questions with an artist’s eye and a deep respect for the dignity of what makes us human. Her film is as indelible as it is unmissable.

The Rider is a rare gem, a small, acutely observed portrait of a few lives on what used to be the frontier but is now a desolate backwater, the windswept badlands around Pine Ridge, South Dakota. Focusing on a young cowboy whose promising future as a top rodeo rider is suddenly jeopardized by a dreadful head injury, this spare and intimate second feature by Chloe Zhao beautifully captures the way a handful of people stoically deal with the meager hands life has dealt them. Commercial prospects are naturally quite modest, but the film will definitely gather a robust core of support from festival audiences and viewers happy to turn off the main highway and onto the back roads in search of good work.

The flavor of the Old West permeates every aspect of this quiet, sensitive piece, and the people in it live lives very similar to those they would have lived in generations past, save for the weed and cellphones. At the center of it is Brady Blackburn (Brady Jandreau), who when first seen evokes Frankenstein with his stapled-together scalp wound, the result of a recent severe injury in which a rodeo horse stomped on his skull.

Rodeo and horse training have always been, and promised to remain, Brady’s life, and the doctors’ edict that he’s got to give it all up is tough to take. Not just that, but his immediate circle counts on him for everything; good-natured sister Lilly (Lilly Jandreau) has limited capacities, while best pal Lane (Lane Scott) suffers from disabilities that would seem to indicate a lifetime of institutional care. Dad (Tim Jandreau) is a tough guy more prone to man-up-style challenges than help or concern. Mom is dead.

Working in a style that one might call lyrical realism, Zhao, whose first feature Songs My Brother Taught Me focused on the Lakota Sioux in the same neighborhood and stirred favorable reactions at Sundance two years ago, brings a few other characters into the mix, just enough to indicate how limited the locals’ prospects are. The old cowboy ethic still prevails, but its tenets seem far less applicable to modern life than they did even in The Last Picture Show several decades back, and the evidence is everywhere to be seen that there’s little in these parts to sustain a secure life or suggest anything better in the future.

This sensitively limned subtext quietly informs the foreground action that is always dominated by Brady’s inner turmoil; his uncertainty lies at the heart of the matter here but is never turned into melodrama just to induce crisis or tension. While his condition remains manifestly impaired — his right hand has become so gnarled that he is constantly obliged to pry his fingers out of a curl — Brady is forced to admit the truth about his condition. But as he slowly improves, you can essentially read his mind as he begins weighing the idea of taking the risk versus living a life that precludes the possibility of climbing back on a horse and competing again.

The film’s elegiac style and admiration for stoic reserve, common traits in American cinema about the West in earlier days, could not be more out of step with the tenor and sensibilities of the moment, and more’s the pity. But Zhao, a Chinese filmmaker who lives in Denver, has resurrected these venerable approaches with a natural, unaffected confidence that is bracing. The result is a beautiful, honest account of a tough way of life, one that produces and requires a strong sense of identity and values.

If all the characters here feel like the real deal, it is because they are; the Blackburn clan are played by real-life family members Brady, Tim and Lilly Jandreau. Zhao met Brady before his real-life accident and developed the story out of the aftermath.